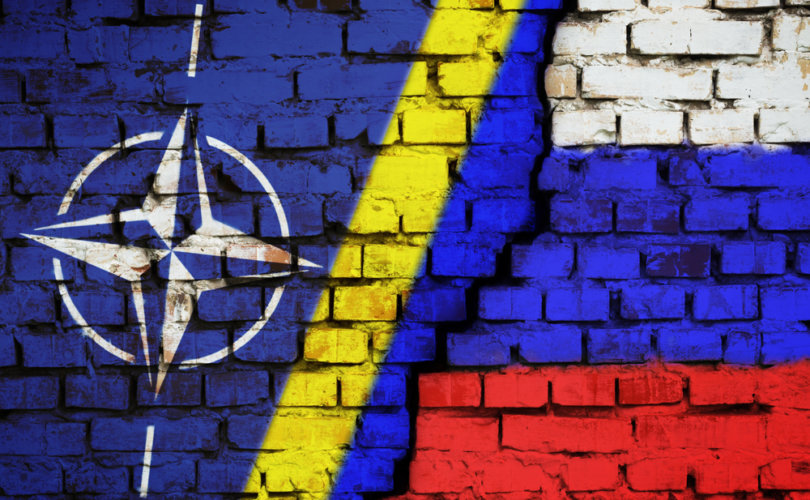 (LifeSiteNews) — A prominent Catholic philosopher has said that Catholic doctrine on what constitutes just cause for war has been grossly violated regarding Ukraine, arguing that neither Russia’s invasion of the country nor a militarized response from NATO countries meet the criteria for just military action.

“One of the striking features of the catastrophe in Ukraine is how unambiguously the principles of just war doctrine seem to apply,” Catholic philosopher Dr. Edward Feser wrote on his eponymous blog, Friday.

Laying out the conditions for just war according to Catholic teaching, Feser explained the four criteria that must be met in order to engage in military conflict without contravening the moral law. The Catechism of the Catholic Church (CCC), he notes, in section 2309 states that:

Feser argued that Russian President Vladimir Putin has violated the first, third, and fourth principles laid out above in launching his assault on Ukraine, describing the “injustice of the invasion” as “obvious.”

Explaining in greater detail, Feser stressed that even if the United States and NATO allies “have long been needlessly poking the bear … it simply doesn’t follow that Ukraine is an ‘aggressor,’” or that Russia has been subject to “lasting, grave, and certain” damage from Ukraine. Thus the first criterion of just war has been violated by Putin, Feser holds.

Additionally, he highlighted that “all other means” of settling disputes between the two nations have not “been shown to be impractical or ineffective,” while the grave harm inflicted on innocent Ukrainians cannot be described as a proportionate response by the Russians, leading Feser to determine that both the second and fourth principles of just war theory have also been violated.

The third principle, that “serious prospects of success” exist for Russia, is at least a reasonable claim in Feser’s view.

On the other hand, the one criterion satisfied by the Ukrainian side of the war is the need to retaliate against the “lasting, grave, and certain” damage being caused by the Russian invasion, a principle which Feser said does not exclude the militaristic support of nations friendly with Ukraine, while noting some important caveats.

Though “justice requires favouring the Ukrainian side,” Feser wrote, the threat of nuclear retaliation from Putin — should U.S. or NATO countries intervene — is not negligible and pursuing military action would violate the fourth principle outlined by the CCC.

“The use of nuclear weapons against Ukraine, to which Russia might resort if NATO intervenes, would surely ‘produce evils and disorders graver than the evil to be eliminated,’” Feser argued.

Notwithstanding the possibility of a broader worldwide conflict by enacting military action against Russia, even a “localized nuclear exchange” would likely contravene the requirement for “serious prospects of success,” Feser noted, concluding that “[it] is therefore irresponsible in the extreme to suggest, as some have, that NATO impose a no-fly zone over Ukraine, which would entail direct military confrontation between NATO and Russia.”

“Any public authorities who take action that risks nuclear war — and thus the deaths of millions of innocent people — would be no less guilty of violating the moral principles governing war than Putin is,” Feser charged, emphasizing that any such escalation by outside forces would in itself be “gravely unjust.”

As a result of his analysis of just war doctrine, Feser suggested that the U.S., NATO countries, and others continue to condemn Putin’s assault and support the Ukrainian resistance while crafting diplomatic means by which Russia might de-escalate its current military trajectory.