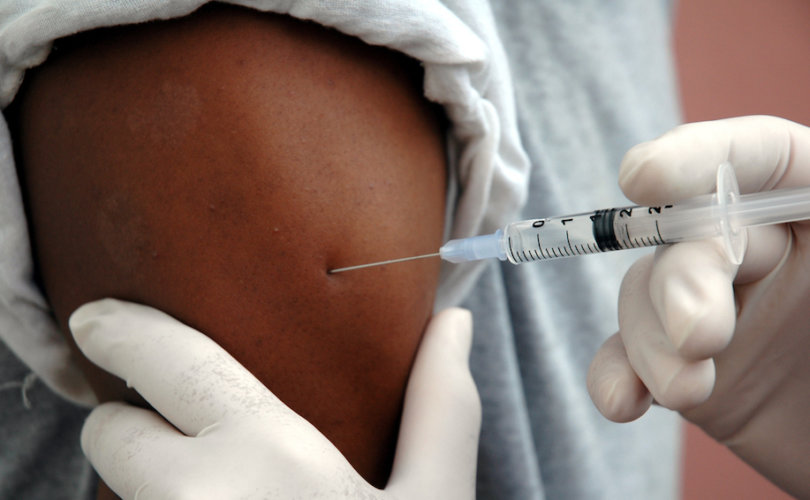 One man from the Muhanga district of Rwanda’s Southern Province testified to DW that a local administrator kicked in his door in the middle of the night and dragged him to a government facility, where he was handcuffed and later vaccinated.

“Around 4 a.m. our local cell leader kicked in my door,” he said. “I thought they were thieves because I was still asleep. There were three people standing at my door, they ordered me to go to the sector offices, and I was handed over to security personnel and I was told that I was going to be vaccinated against my will.” Cells refer to administrative entities in Rwanda between villages and districts, according to DW.

The man added that he was forced to sit under the sun until evening, after which five police officers and six civilians surrounded him and ordered him to enter a room.

“They pounced on me and dragged me on the ground, manhandling me, shoving their knees in my back and everywhere, as the handcuffs were cutting deep wounds around my wrists,” he recalled. “They even tried to suffocate me.” Medics then came and injected him with a shot, the man said.

The harrowing account echoes similar testimonies from across Rwanda. A group of Pentecostal Christians who refused the vaccines told DW that military, police, and local officials detained them for a week and tried to “sensitize” them to get the jabs, before vaccinating them without their consent after they continued to resist.

“We completely refused to take the jabs and instead asked the soldiers and police to shoot us or drown us to death. We put up a demonstration, but they said they won’t shoot us,” a man attested. “When they realized we were not ready to change our mind, they brought in many police officers, and we were handcuffed.”

“The police officers held us to the ground, and we were vaccinated,” he said.

The group was reportedly held in transit centers typically used for criminals and street children in the Ngororero district of the Western Province of Rwanda.

Another Rwandan man, from the Rwamagana district in the Eastern Province, also told DW that officials sought to inject him and his wife, prompting them to flee their home. The man said he was suffering from malaria and taking medication at the time.

“I begged them not to vaccinate me. When they insisted, we fled our home,” he related.

“It’s not only me,” the man noted, adding that many of his neighbors were forcibly jabbed. “If you want, I can point to different places where they are,” he said.

DW said that it could not independently verify the accounts.

Rwanda’s vaccination program has driven some to leave the country altogether. AFP reported last week that around 100 Rwandans fled to the Democratic Republican of the Congo, landing on Idjwi island, which previously hosted tens of thousands of refugees during the 1994 Rwanda genocide.

“A handful of Rwandans crossed over to neighboring countries claiming to be against vaccination, mostly for religious reasons. Most have returned or are returning, facilitated by bilateral cooperation,” Rwandan government spokesperson Yolande Makolo was quoted as saying.

In a statement Tuesday to DW, Ngororero mayor Christopher Nkusi confirmed that his district has indeed “sensitized” people who have resisted the COVID injections but claimed that he “was not aware” of any incidents of forcible vaccination.

“Those with resistance are sensitized and vaccinated afterwards because even right now we have many who are not yet vaccinated. We are still in the process of sensitizing them. I am not aware of any case of forced vaccination in my district,” Nkusi said.

Rwanda’s health ministry and the prime minister’s office did not respond to requests from DW for comment.

CLADHO, an umbrella of human rights groups in Rwanda, told the German public broadcaster that the organization is aware of media reports about forced COVID vaccination and is currently investigating. Vaccinating people against their will is illegal in Rwanda, CLADHO said.

Rwanda has one of the highest vaccination rates in Africa, with 42 percent of its 13 million people “fully vaccinated” and another 17 percent injected with at least one dose by late December, according to Our World in Data. The country has used the Moderna, Pfizer, and AstraZeneca-Oxford shots and was the first African nation to roll out Pfizer’s jab last year.

The Rwandan government has employed extraordinarily harsh COVID vaccine requirements, mandating vaccination for churches, weddings, and public transportation, as well as for many public settings, including conferences, restaurants, bars, and hotels. Private and public employees must also be jabbed.

Last summer, health authorities launched a door-to-door campaign to identify unvaccinated people in the capital of Kigali, which the mayor described at the time as another effort to “sensitize” those who had not been vaccinated. More than 90 percent of Kigali residents 12 years old and up are “fully vaccinated.”

The government has ramped up restrictions in recent weeks in light of the milder Omicron variant, limiting churches to 50 percent capacity and at-home gatherings to 50 people, while ordering that home gatherings be supervised by local officials. The Rwanda Biomedical Centre (RBC) earlier this month mandated vaccination certificates to leave the country.