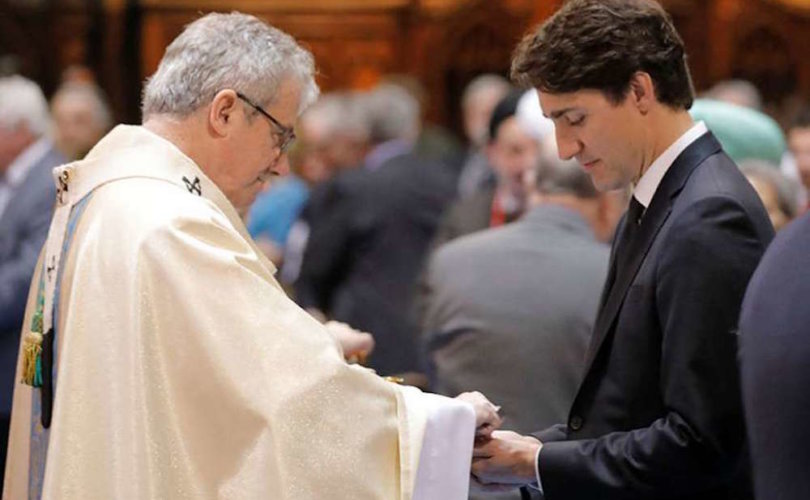 MONTREAL, May 19, 2017 (LifeSiteNews) — Archbishop of Montreal Christian Lépine has defended giving Holy Communion to Canada’s notoriously pro-abortion Catholic prime minister during Mass on Wednesday, describing it as “a gesture of hope.”

Liberal Prime Minister Justin Trudeau received Holy Communion and was among the dignitaries who spoke from the sanctuary at a Mass marking Montreal’s 375th anniversary, and which CBC broadcast live from Notre Dame Cathedral.

Cardinal Gérald Lacroix of Quebec City, Cardinal Thomas Collins of Toronto, and papal nuncio Archbishop Luigi Bonazzi were among the prelates who concelebrated with Lépine.

The event was widely publicized, with the Catholic Register running a photo on its Facebook page. Video of the Mass was also archived on CPAC.

The Church’s Code of Canon Law requires ministers of the Eucharist to deny Communion to those who are excommunicated or are “obstinately persevering in manifest grave sin.” This law is based in St. Paul’s teaching in 1 Corinthians 11:29: “Any one who eats and drinks without discerning the body eats and drinks judgment upon himself.”

Cardinal Joseph Ratzinger, who later became Pope Benedict XVI, affirmed in a 2004 letter from the Vatican that this law applies to pro-abortion politicians.

The Church views denying Communion in these cases as an act of compassion. It is intended both to protect the individual from committing the sacrilege of consuming the Host while in a state of grave sin, and to avoid the scandal of appearing to show approval for the individual’s gravely sinful actions.

“Justin Trudeau is a paradigm example of a high-profile, apostate Catholic who should be denied Communion,” Georges Buscemi, president of the Quebec Life Coalition, told LifeSiteNews.

“It stands to reason that a politician like him, who makes it his life purpose to destroy the Catholic faith and knowledge of the natural moral law in Canada, should be asked to not present himself for Communion,” Buscemi said.

“This should be done out of love for him and the ones who would be scandalized by seeing his evil behaviour affirmed by a bishop.”

‘A gesture of hope’

Archbishop Lépine’s appointment to the see of Montreal in 2012 was seen as a sign of hope for the Church in Quebec. His deep devotion to the Church's teachings and practices were a marked contrast with his predecessor.

His appointment came amid outcries from abortion activists. Yet he has gladly affirmed the Church’s teachings on life, marriage, and sexuality. He has led Eucharistic processions as a sign of contradiction through the heart of the once-Catholic city. For the first time, the Archbishop of Montreal has made it a practice to attend Ottawa’s National March for Life.

In 2012, Buscemi’s Quebec Life Coalition gave him a ‘Defender of Life’ award “as a token of what he has done for Life and Family in the past, and as a sign of our support for all his future projects in defense of life and the family.”

Archbishop Lépine told LifeSiteNews on Thursday that he gave Trudeau Holy Communion as a “gesture of hope” and “to keep in contact and how to keep a bridge open, if I may say so.”

There’s a “need to make the distinction between the human being and what the person does, or says or thinks,” and “to stay focused on who the person is, a human being called by Christ, called to true freedom,” he said in a telephone call from Montreal.

LifeSiteNews asked Lépine if he had attempted to meet with Trudeau before the Mass to speak to him about his pro-abortion position.

The archbishop responded that “private communications” were “private,” and added that “publicly, there’s a need for communication, and there’s been communication, but there are many forces going on in society, so yet again, it’s a matter of hope.”

When asked how he would respond to those who see this as a sacrilege, Lépine again pointed to the distinction between “the person and the acts of the person and what the person says.”

It’s “going too far” if someone “feels to be rejected as a person,” he told LifeSiteNews.

“It’s how to discuss what is said or what is done without rejecting the person as a person and how to do it. So this is a challenge, that’s what I try to do.”

As for causing scandal, Lépine countered that “it can cause scandal to the faithful if you cut someone.”

He reiterated that the distinction must be made between the person and what that person “does or says or thinks.”and that “you don’t lose sight that it’s a human being created in the image of God.”

Lépine said efforts are underway to establish contact with Trudeau. “The call is happening, but if you want to call, you have to be connected, you have to meet somewhere.”

The Catholic Church teaches that abortion — the deliberate and intended killing of the child in the womb — is a grave sin and cannot be justified under any circumstances.

It is well known that Trudeau has persistently and unapologetically promoted abortion throughout his political career.

Indeed, it would be no exaggeration to say championing a woman’s “right” to choose abortion, which he erroneously insists is a Charter right, is Trudeau’s defining political position.

In 2014 as Liberal leader, Trudeau banned anyone with pro-life convictions from running as a Liberal Party candidate.

As prime minister, he has pushed for access to abortion on Prince Edward Island, given $20 million to the Dutch global abortion fund She Decides, and earmarked $650 million over three years to promote and provide abortion as part of Canada’s aid to developing countries.

Moreover, his public utterances in support of abortion are legion.

During his address from the Cathedral sanctuary, Trudeau said: “Montrealers, more than anyone, know that our diversity is our strength. This Mass is a testament to that.”

“It’s very disappointing that Trudeau once again presents himself as a faithful Catholic when in fact, he’s a wolf in sheep’s clothing, and instead of protecting the lambs he devours them,” he told LifeSiteNews.

“It’s doubly concerning to our Catholic supporters and others in the various faith communities that he shows such disrespect, and the Catholic Church does nothing to prevent this blasphemy.”

Cardinal Ratzinger’s 2004 letter set out norms for reception of Holy Communion and applied them specifically to cases such as Trudeau.

It states in part:

Apart from an individual's judgment about his worthiness to present himself to receive the Holy Eucharist, the minister of Holy Communion may find himself in the situation where he must refuse to distribute Holy Communion to someone, such as in cases of a declared excommunication, a declared interdict, or an obstinate persistence in manifest grave sin (cf. can. 915).

Regarding the grave sin of abortion or euthanasia, when a person’s formal cooperation becomes manifest (understood, in the case of a Catholic politician, as his consistently campaigning and voting for permissive abortion and euthanasia laws), his pastor should meet with him, instructing him about the Church’s teaching, informing him that he is not to present himself for Holy Communion until he brings to an end the objective situation of sin, and warning him that he will otherwise be denied the Eucharist.

Buscemi pointed out that Pope Francis himself, while archbishop of Buenos Aires, endorsed the Latin American bishops’ Aparecida document, which contained this statement:

We should commit ourselves to ‘eucharistic coherence’, that is, we should be conscious that people cannot receive holy communion and at the same time act or speak against the commandments, in particular when abortion, euthanasia, and other serious crimes against life and family are facilitated. This responsibility applies particularly to legislators, governors, and health professionals.

Other bishops on Trudeau and Communion

“A person who takes a position in contradiction to the teaching of the Catholic Church on the value and dignity of human life from the moment of conception to the moment of a natural death, and persists in this belief, is not in communion with the Church’s values and teaching,” it read.

However, Prendergast told the Catholic Register at the time that he would not refuse Trudeau Holy Communion unless he met with him first.

“I don’t think you can make a judgment about someone’s faith position simply by what is said in the public,” he said. “There needs to be a meeting with myself, or with his parish priest, a priest who is in harmony with the Church’s teachings.”

Bishop Christian Reisbeck, Ottawa’s auxiliary bishop, told LifeSiteNews at the time that if attempts at “fraternal correction” had failed, a pro-abortion politician could be denied Holy Communion under Canon 915.

“Out of concern for safeguarding the reverence that is due Our Lord in the Eucharist, and to avoid scandal, one could possibly apply this norm even in the case of a pro-abortion Catholic politician who is extremely vocal about his position.”

RELATED: How the Catholic Church helped Canada elect its most pro-abortion prime minister in history