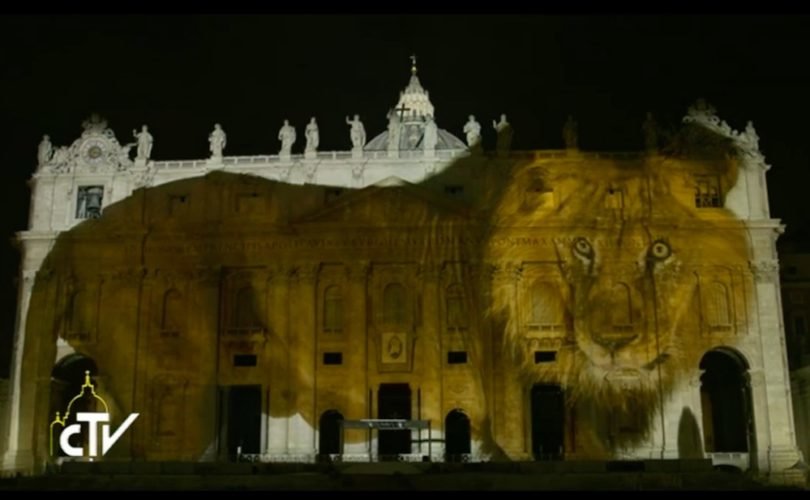 The image of a lion is projected on the facade of St. Peter's Basilica as part of a "climate change" light show on December 8.

Note: Sign the petition to the Vatican expressing your concerns about the 'climate change' light show here.

ROME, December 8, 2015 (LifeSiteNews) – Howling, grunting, and roaring animals, along with images of overcrowded city centers, depictions of pollution, and negative portrayals of industrialization, appeared on the facade of St. Peter’s Basilica this evening during a much hyped “climate change” light show.

The show was the finale of the opening celebration for the Year of Mercy declared by Pope Francis. The event was watched by tens of thousands in St. Peter’s Square along with estimated millions worldwide through online streaming.

The multi-million dollar show titled “Fiat Lux: Illuminating Our Common Home” was created and funded by climate-change partisans and population-control advocates with the goal to “educate and inspire change around the climate crisis across generations, cultures, languages, religions and class.” Along with images of the world and its endangered animals, including lions, birds, apes, and whales, appeared New Age symbolism associated with ancient pagan deities.

The show also took place on the most important Marian feast day for Catholics, the Immaculate Conception, where Catholics celebrate Mary being conceived in the womb of her mother Anne without the stain of original sin.

Many pro-family leaders from around the world say they are flabbergasted that the pope would allow St. Peter’s to be used as a backdrop for promoting the controversial and contentious “climate change” agenda.

“I am sorry that the facade of St. Peter's has been turned into a propaganda stage for the scientific fraud known as ‘Catastrophic Man-Caused Global Warming,’” Steven Mosher, president of the Population Research Institute, told LifeSiteNews.

“I am sick at the thought that this most sacred space — St. Peter's Basilica — will be the backdrop for the further dissemination of this fraud, whose ultimate goal is to impose a ‘Carbon Tax’ on the developed countries. This tax will not only cripple global economic growth and undermine democracy, its proceeds will be used to fund even more population control programs in the developing world,” he said.

The Vatican’s spokesperson for the event, Archbishop Rino Fisichella, the president of the Pontifical Council for the New Evangelization, called the event “unique…for its genre and for the fact that it is being displayed for the first time on such a significant backdrop.”

“These illuminations will present images inspired of Mercy, of humanity, of the natural world, and of climate changes,” he said.

Fisichella said that the light show on the Vatican is meant to link Pope Francis’ environment encyclical Laudato si’ with the United Nations Climate Change Conference (Cop21) currently underway in Paris. The Vatican has shown strong support for the conference.  Having the show conclude the opening Year of Mercy celebrations also links the pope’s message about “mercy” to fighting “climate change.”

Robert Royal, president of the Washington-based Faith and Reason Institute and a prominent Catholic commentator, called it “seriously wrong” to have a “radical environmental message” projected onto St. Peter’s.

“This is the kind of thing ideological politicians do, like President Obama’s rainbow projection onto the White House after the Supreme Court approved gay ‘marriage.’ The White House is the people’s house, all the American people’s. St. Peter’s is even far more universal than that.”

“Projecting onto it a radical environmental message — and one that has no chance of actually resulting in an international agreement, given the unreality of the approach — seems to make the Church just one more international NGO, something Pope Francis has explicitly warned it should not be,” he told LifeSiteNews.

Note: Sign the petition to the Vatican expressing your concerns about the 'climate change' light show here.

Voice of the Family co-founder John Smeaton said that contrary to popular perception, the “environmental agenda” is tied to an anti-human agenda.

“The environmental movement commonly regards population growth as a threat. Developing nations are being flooded with contraceptives and subjected to pressure to legalise abortion. Given that contraception and environmentalism so often go hand-in-hand, it is deeply troubling that current Vatican authorities have so strongly endorsed the environmental agenda without taking an equally strong stance on the abortion and contraception agenda which lies behind it.”

“If the Vatican issued similarly strong and high-profile calls to world governments to end abortion, many lives could be saved. The St. Peter’s light show is a clear demonstration of the tragic truth that this papacy has the wrong priorities,” he told LifeSiteNews.

The event, billed as “contemporary public art,” was sponsored by organizations named after Greek and Roman pagan gods that push the climate change agenda and by an organization that directly funds abortions in developing countries.

The main financial backer behind the event is the US-led World Bank Group via its Connect4Climate initiative. The World Bank, created in 1945 to rebuild a war-torn Europe, has a long history (here, here, or here) of relentlessly funding abortion and contraception programs in developing nations under the banner of “ending extreme poverty” and “boosting shared prosperity.” Pro-life leaders have denounced the programs time and again as thinly veiled population control programs aimed at reducing populations considered by Western elites to be undesirable.

Other partners include Vulcan Inc., a private company based out of Seattle, Washington, that “strives to create a new kind of future” by “upend[ing] conventional thinking.” The company was deliberately named after the Roman god Vulcan, the deity of destructive fire, whose earliest known shrine existed in Rome at the foot of the Capitoline Hill, close by the Vatican.

STORY: Vatican’s ‘climate change’ light show skipped the most endangered species of all – the unborn child

Another partner is Okeanos, an environmentalist foundation with the purpose of raising awareness “concerning the various threats our oceans are facing.” The foundation rails against what it calls the “sins against climate.” The foundation is named after the Greek and Roman Titan god “Okeanos” who was held to be the divine personification of the sea whose fish in one hand and serpent in the other signify bounty and prophecy.

Obscura Digital, the San Francisco-based organization putting on the actual show, has its name derived from the Latin root meaning “dark.” The company specializes in creating “immersive experiences that will change the way you think about the world around you” using holographic projections, 3D animation, and dynamic visualization.

The organization has in the past (here and here) worked on climate change projects with the UN to show the “effect of human enterprise on the environment” and to issue a “call for global solutions.”

The shows director Travis Threlkel, founder and creative director of Obscura, said in an August interview when discussing the New York version of the show that was projected onto the Empire State Building, that pagan deities were specifically incorporated into the presentation. He said the show included the greek pagan goddess Gaia, a Greek Mother Earth who has been appropriated by worshipers of nature, along with Aya, a Babylonian mother goddess associated with the rising sun and with sexual love.

It was at the New York show’s end that startling images of the faces of various pagan goddesses were projected onto the building. Predominantly displayed was an image of Kali, the Hindu goddess of death and destruction. Kali, who was depicted with a long blood red tongue and whose name means “the black one,” promised wealth to those who satiated her lust for blood by human sacrifice. Daily human sacrifices of young children were offered on her altars in India until 200 years ago. She has since been culturally appropriated by New Age spirituality as a kind of Mother Earth goddess.

“Android” Andrew Jones, the artist behind the image, said at that time that he wanted to depict Mother Earth in her “fiercest form” to draw attention to what might happen if people ignored the implications of climate change.

The Vatican show included artwork and computer-generated designs by Jones, but it is unknown at this time what artwork was featured.

Jones, one of the world’s foremost digital painters and projection artists, specializes in portraying terrifying images of Greek, Roman and Eastern pagan deities. He said in an interview last month that he turns to these gods and goddesses by means of “psychedelic substances” (mind altering drugs) so that he can portray them accurately. He said the “deities” are “actively involved” in guiding his hand as he makes the work.

“These [drugs] are tools that grant portals and access into different realms that I still haven’t fully been able to grasp or say that I have uncovered all of their meanings. … They have evolved my ability to … discover new and interesting combinations of energy and matter. Some have … shown me greater nightmares than I could ever depict or wish to imagine ever again.”

“These spirits and the deities that [the images] represent [in India, Greece, etc.] are actively involved, enrolled, and contributing to humans reinventing the visual vernacular of these beings as time and technology evolves,” he said.

Jones said that good art connects the viewer to something “mystical.” He said in a 2010 video  interview that a good reaction to his art happens when people “throw up, or urinate themselves, or [release] any sort of bodily excrement.”

While it remains unclear at this point if any of Jones’ pagan images whole or in part made their way onto St. Peter’s, various symbols belonging to deities mentioned by the show’s director Threlkel did. For instance, Aya’s symbol of the rising sun appeared at least on three occasions throughout the show, most prominently at the beginning when a giant sun was depicted rising upon St. Peter’s.

Catholic commentator Fr. John Zuhlsdorf wrote on his blog that the event was “irreverent” and even a form of “sacrilege.”

“St. Peter’s is, without question, a sacred place and object (a very large one, too!).  It is, without question, dedicated by the Church to sacred purposes.  The use of this sacred building and place (where St. Peter was martyred and buried, a pilgrimage place, etc. etc. etc.) as a projection screen for mere secular purposes is irreverent treatment,” he wrote.

Fr. Zuhlsdorf quoted the Catholic Dictionary which defines sacrilege as the “irreverent treatment of sacred things, persons or places, i.e., those dedicated by God or the Church to sacred purposes.  It is a sin against the virtue of religion, of its nature grave, but admitting smallness of matter.”

“This has gone beyond ridiculous,” he said.

The priest said the image of the lion projected on to St. Peter's made him think of a passage from St. Peter's first letter: “Be sober and watch: because your adversary the devil, as a roaring lion, goeth about seeking whom he may devour. Whom resist ye, strong in faith: knowing that the same affliction befalls, your brethren who are in the world” (1 Peter 5:8).