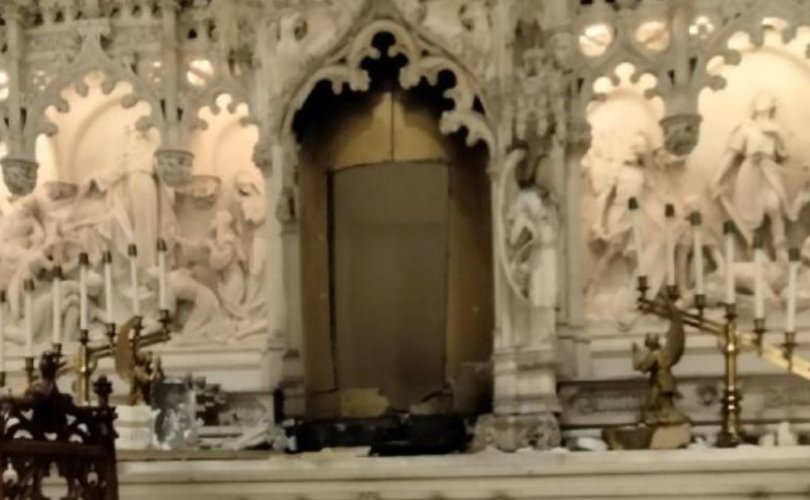 BROOKLYN, New York (LifeSiteNews) — A tabernacle was ripped from the altar of a Catholic church in New York City and stolen after the consecrated hosts it contained were scattered over the altar.

The outrage took place in the parish church of St. Augustine in Park Slope, Brooklyn.

Father Frank Tumino, the pastor of St. Augustine and St. Francis Xavier Parish, said he had gone into the church at around 3.50 p.m. on Saturday afternoon to hear confessions when he discovered the altar damaged altar and the tabernacle missing.

“This is devastating, as the Tabernacle is the central focus of our Church outside of worship, holding the Body of Christ, the Eucharist, which is delivered to the sick and homebound,” said Tumino.

The perpetrators used tools to cut through a steel cabinet which contained the “pure 18-karat gold tabernacle with jewels.” The precious object is believed to be worth $2 million.

The priest described the removal of the tabernacle as “very, very violent.”

“To know that a burglar entered the most sacred space of our beautiful church and took great pains to cut into a security system is a heinous act of disrespect,” he said.

The Holy Eucharist contained within the tabernacle was “thrown all over the altar” and the floor, Tumino added.

According to Tumino, the burglars either “did not understand” that they were desecrating the Eucharist, or “they just didn’t care.”

— Article continues below Petition —
STAND with Abp. Cordileone as he bars Nancy Pelosi from Holy Communion until she repents
Show Petition Text
15380 have signed the petition.
Let's get to 17500!
Thank you for signing this petition!
Add your signature:
Show Petition Text

In addition to the theft of the tabernacle, the diocese also indicated that statues of angels on either side of the tabernacle “were decapitated and destroyed” and that an empty safe located in the sacristy was also cut open.

Although the church was fitted with security cameras “the burglars apparently made off with some components of the video recording system,” according to the Tablet, Brooklyn’s diocesan newspaper.

The church had been locked since 7 p.m. on the previous Thursday, and the burglary is believed to have taken place sometime between Thursday night and Saturday afternoon.

Tumino addressed the perpetrators on Sunday as he took questions from the press.

“As a human being, I’d want to say you’ve taken away something that is so beautiful, that has given people beauty in the midst of the ugliness of their lives and times,” he said.

The diocesan bishop, Bishop Robert Brennan, said he was “truly saddened by the news of sacrilege of the Most Blessed Sacrament which took place in one of our churches in the Diocese of Brooklyn.”

The diocese described the stolen tabernacle as “irreplaceable due to its historical and artistic value.”

The tabernacle was designed by architect Albert Parfitt in 1895. It was made of gold and silver and was decorated with jewels that had been donated by parishioners.

Police sources said no arrests have been made in the case so far, and the incident is not being officially investigated as a hate crime.