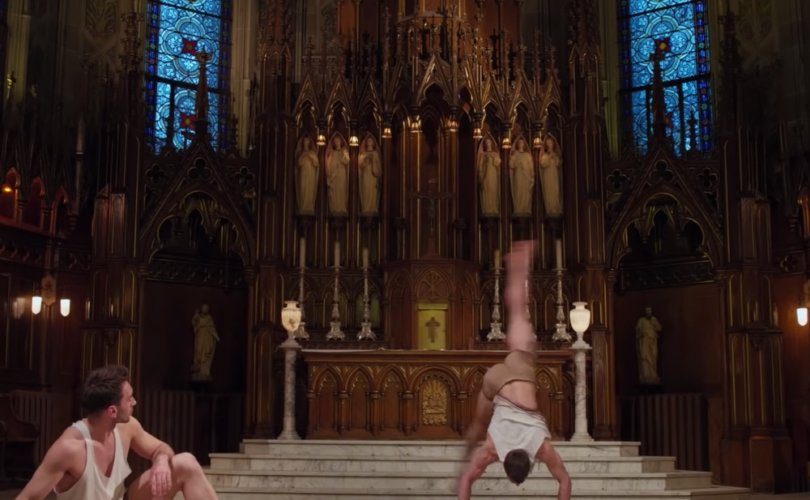 WARNING: This article contains videos or links to videos that show a sacrilegious, homoerotic event inside a Catholic church and a graphic homosexual dance.

MONTREAL, August 7, 2019 (LifeSiteNews) – An historic Catholic church in Montreal is at the center of a major controversy regarding the use of its sacred space for a profane and sinful act performed in the sanctuary.

LGBT artist and activist Matthew Richardson released his most recent production titled, “Hallelujah” on May 1 of this year. The video was set in the sanctuary of St. Peter the Apostle Catholic Church and was produced in order to promote a message of “tolerance” by juxtaposing messages of “hate,” religious images, and homoerotic choreography. And while Richardson claims to have hoped “not to say something bad about religion,” the fact remains that the production of his performance within the church may have constituted acts of sacrilege and desecration.

“Hallelujah” opens with a semi-nude man standing in the sanctuary of the church, facing the tabernacle and high altar. After images of violence and protests are contrasted with religious art, another semi-nude man walks up the aisle to the sanctuary, where both men embrace and dance in a manner suggestive of homosexual intercourse. All of this takes place to an adaptation of Leonard Cohen’s song, “Hallelujah.” At the end of the video, the two men caress and smear each other with colored chalk dust and gyrate together as they produce a banner with a rainbow-colored heart and the words, “Choose Love,” and the banner is raised in the sanctuary where they had been dancing.

According to the Code of Canon Law, this performance could very well have constituted acts of both desecration and sacrilege. Canon 1210 says that “anything out of harmony with the holiness of the place is forbidden,” and Canon 1211 says that if the acts done are “gravely injurious and give scandal to the faithful,” and “are so serious and so contrary to the sacred character of the place,” the local bishop may judge that the space has been desecrated and cannot be used for worship until “the harm is repaired by means of the penitential rite.”

Can. 1210 In a sacred place only those things are to be permitted which serve to exercise or promote worship, piety and religion. Anything out of harmony with the holiness of the place is forbidden. The Ordinary may however, for individual cases, permit other uses, provided they are not contrary to the sacred character of the place.

Can. 1211 Sacred places are desecrated by acts done in them which are gravely injurious and give scandal to the faithful when, in the judgement of the local Ordinary, these acts are so serious and so contrary to the sacred character of the place that worship may not be held there until the harm is repaired by means of the penitential rite which is prescribed in the liturgical books.

If the performance does not constitute an act of desecration in the eyes of the bishop, at the very least, it constitutes an act of sacrilege. The Catechism of the Catholic Church defines sacrilege as follows:

2120 Sacrilege consists in profaning or treating unworthily the sacraments and other liturgical actions, as well as persons, things, or places consecrated to God. Sacrilege is a grave sin especially when committed against the Eucharist, for in this sacrament the true Body of Christ is made substantially present for us.

Many Catholics have been left to wonder how such a thing could happen in a Catholic church. In an interview with the San Diego Gay & Lesbian News, Richardson explained how he had received formal permission from the parish for his performance. “I honestly just went into the church, asked who I could speak to about the idea, and then proposed what I had in mind,” Richardson said. “They welcomed me, my message, and our creation with open arms.”

In a Facebook live session just prior to the video’s release, Richardson gave additional details about his interaction with an unnamed representative of the parish, from whom he received the permission. At the 8:30 mark, Richardson explains that he read online about how St. Peter the Apostle does a lot of “LGBT support and outreach,” prompting him to reach out to the church with a presentation and proposal on his project. Richardson said:

“The guy I was talking to had seen my first video, so he had seen ‘Arrow,’ and as soon as he saw that it was the same guy who made that, he was like, ‘that’s fine, let’s just … you can, we’ll do it, let’s talk about it.’ So, it was amazing to me that I didn’t have to do that much work to book the cathedral, it just happened. It was very easy.”

At 11:12 in the Facebook live video, Richardson took a question from someone who asked, “How did the church feel about being at the forefront of a gay relationship?” Richardson responded:

“They really support it. The guy who I worked with had already seen my first video, so he knew the message I was wanting to share anyway, and so he really supported what I was doing. I showed him the whole presentation with my message, what it would look like, what it would be, but I wanted them to make sure that I wasn’t saying something bad about religion, I’m just saying, no matter what your faith, you can still be kind.”

Just last month, St. Peter the Apostle celebrated the funeral Mass for same-sex “marriage” advocate Laurent Mccutcheon. Mccutcheon committed himself to the advancement of public acceptance of homosexuality after the 1969 Stonewall riot, and was a major proponent behind Quebec’s 2005 recognition of same-sex “marriage.” In celebration of Mccutcheon’s promotion of homosexuality, St. Peter the Apostle was decorated with rainbow-colored streamers.

The determination as to whether the parish has indeed been desecrated by the homoerotic performance is entirely up to the local ordinary, Archbishop Christian Lépine.

Catholics wishing to contact the archbishop to ask him to investigate this sacrilegious event and make a determination on whether the performance constituted an act of desecration may do so with the information provided below: