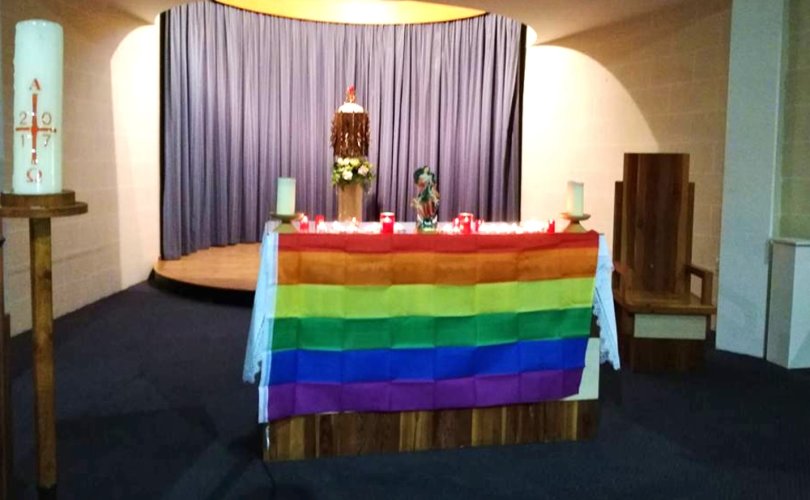 MALTA, June 5, 2017 (LifeSiteNews) — A homosexual group that campaigns for the Catholic Church to accept homosexual “marriage,” sodomy, and adoption of children by same-sex couples has been given a free pass to operate unofficially in the Catholic Archdiocese of Malta run by Archbishop Charles Scicluna.

Drachma LGBTI, which labels itself “Catholic,” has been allowed to meet in Maltese Catholic parishes, retreat centers, and in the Catholic chapel of the country’s only university.

While the group has no official status within the archdiocese, this has not stopped Archbishop Scicluna from going out of his way to lend support to the group and its activities.

In 2014, the Archbishop presided at a Eucharistic celebration put on by the group aimed at ending “homophobia.”

Stated the group about the event at that time: “The Drachma Community hopes that this celebration can serve as a clear message against all forms of homophobia and transphobia in our society. This celebration also demonstrates that it is possible for LGBTI persons to fully integrate their sexuality with their spirituality.”

Last year, the Archdiocese hosted on its own website a report with photos of Drachma LGBTI presenting Scicluna with the group’s newly published pro-homosexual book titled “Our Children.” The Archbishop called the book a “tool to help parents of LGBTI children.”

Last month, the group posted a photo on its Facebook page of a prayer event in a Catholic chapel to end “homophobia.” The photo showed a Catholic altar bedecked with vigil candles and a statue of the Virgin Mary. The front of the altar was draped in a rainbow “gay pride” flag.

“I have my nature as a homosexual man, I must love in that way, and I can only, to put it like that, live love in a complete way when I live my love, my bisexual, homosexual love, in that way,” he added.

Asked how homosexual Catholics belonging to the group can remain loyal to the moral teachings of the Church, Vella responded that active homosexuals have a “responsibility” to “dialogue” with the Church to help her “slowly slowly” find “balance” in her moral teachings.

“If you consider sexuality as a gift of God, therefore you cannot consider sexuality to be an obstacle to being a person of faith. The solution is that you find, in an adequate way, in a good way, how you integrate these two realities together. After all, if we are God’s children, and sexuality is a gift, let's live it in a beautiful way,” he added.

LifeSiteNews asked Scicluna if his Archdiocese has a support group for Catholics with same-sex attraction that faithfully adheres to Catholic teaching, but did not receive a response.

The Catholic Church teaches that homosexual acts, as well as same-sex orientation, can never be accepted as if it were part of God’s plan for human sexuality.

The Church stated in a 1986 letter to bishops regarding pastoral care for homosexuals that the same-sex inclination is a “more or less strong tendency ordered toward an intrinsic moral evil; and thus the inclination itself must be seen as an objective disorder.”

“[S]pecial concern and pastoral attention should be directed toward those who have this condition, lest they be led to believe that the living out of this orientation in homosexual activity is a morally acceptable option. It is not,” the letter stated.

In 2003, the Congregation for the Doctrine of the Faith reaffirmed the homosexual inclination as “objectively disordered” and called homosexual practices “sins gravely contrary to chastity.”

“The Church teaches that respect for homosexual persons cannot lead in any way to approval of homosexual behavior or to legal recognition of homosexual unions,” the document stated.

The Catholic Church in Malta under Scicluna’s leadership has strayed from authentic Catholic teaching in other areas besides sexual morality. Earlier this year, the bishops allowed civilly-divorced-and-remarried Catholics living in adultery to receive Holy Communion and has forced seminarians to comply with the Communion guidelines.

Last month, Scicluna along with Bishop Mario Grech of Gozo attacked a group of faithful Catholics in Malta after it published a full page ad in a widely read paper defending real marriage against “unnatural” homosexual “marriage” in the lead-up to the country’s June 3 general election. The bishops criticized the ad as “propaganda” and stated that they had “nothing to do” with the group.