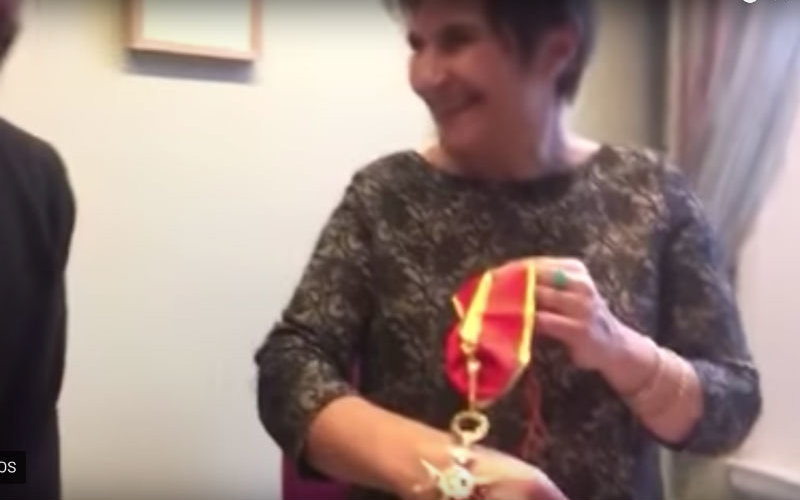 Lilianne Ploumen with the Pontifical Equestrian Order of St. Gregory the Great award

January 12, 2018 (Lepanto Institute) – On January 12, reports began surfacing on Twitter that Lilianne Ploumen, former minister for Foreign Trade and Development Cooperation in the Netherlands, was honored by Pope Francis with the title of Commander in the Pontifical Equestrian Order of St. Gregory the Great.

The Lepanto Institute was able to confirm from a December 22, 2017, Dutch radio broadcast that Ploumen indeed received the honor. In a brief video clip promoting the broadcast, Ploumen displays the medal while saying that she received it from the Pope.

Here is a crude translation of the exchange:

BNR: And this is the umpteenth prize that Lilianne Ploumen observes, won in 2017 and from whom they came.

Ploumen: Yes, it is a high distinction from the Vatican; from the pope.

BNR: From the pope.

Ploumen: It is Commander in the order of St. Gregory.

BNR: And that despite that you are pro-abortion.

Ploumen: Yes, you can check.

To say that Lilianne Ploumen is “pro-abortion” is an extreme understatement and doesn’t even come close to the scandalous reality of her activism.

Referring to the Mexico City Policy as a “Global Gag Rule,” Ploumen stated that the intention of She Decides was to continue support for existing programs being run by organizations such as the United Nations Population Fund (UNPFA), the International Planned Parenthood Federation and Marie Stopes International. She said, “These are successful and effective programs: direct support, distributing condoms, making sure women are accompanied at the birth, and making sure abortion is safe if they have no other choice.”

In October 2017, Ploumen wrote an article for the Financial Times, in which she emphatically stated, “America’s regressive policies on abortion are a calamity for girls’ and women’s rights that the rest of the world must counter.”

Ironically, just a few days ago, Ploumen was awarded the Machiavelli Prize “for her campaign for the safe abortion fund SheDecides.” The article on the award indicates that “The Machiavelli prize is awarded to a person or organization which the jury considers has excelled in public communication. In particular, the jury praised the speed at which SheDecides was set up and went global.”

It is worth noting that from 2004 to 2007 Ploumen was the director of programs and on the board of directors for CORDAID, the Dutch Catholic aid relief agency that was caught funding Planned Parenthood and dispensing contraception.

But Ploumen’s anti-Catholic activity isn’t restricted to abortion. In September 2017, Ploumen participated in the United Nations LGBTI Core Group.  As the first speaker at the event, Ploumen noted that “LGBTI rights are human rights.”  In her opening remarks, she said, “We cannot be complacent. (Today) in more than 70 countries homosexuality is still criminalized … stigma against LGBT people continue all over the world.”

In 2014, Ploumen ended foreign aid to the country of Uganda for passing a bill banning sodomy and same-sex “marriage.”

In February 2010, Ploumen called on LGBT activists to descend upon and disrupt Mass at St. John the Baptist Cathedral, wearing pink triangles with the words “Jesus excludes no one.” The reason?  She and other pro-LGBT activists were protesting the Church’s moral teaching regarding homosexuality.

The Pontifical Equestrian Order of St. Gregory the Great was established in September 1831 by Pope Gregory XVI. The honor of membership in the Order is conferred on individuals for their “personal service to the Holy See and to the Roman Catholic Church, through their unusual labors, their support of the Holy See, and their excellent examples set forth in their communities and their countries.”

It remains to be seen what service Lilianne Ploumen has provided for the Catholic Church or the Holy See, given her staunch support for homosexuality, abortion and contraception. Given that the one thing that Lilianne Ploumen is known for in the past year is the establishment of a fund that provides hundreds of millions of dollars to organizations that commit abortion and dispense contraception, it is difficult, if not impossible, to separate her recent Pontifical honor from this grievous and scandalous act.