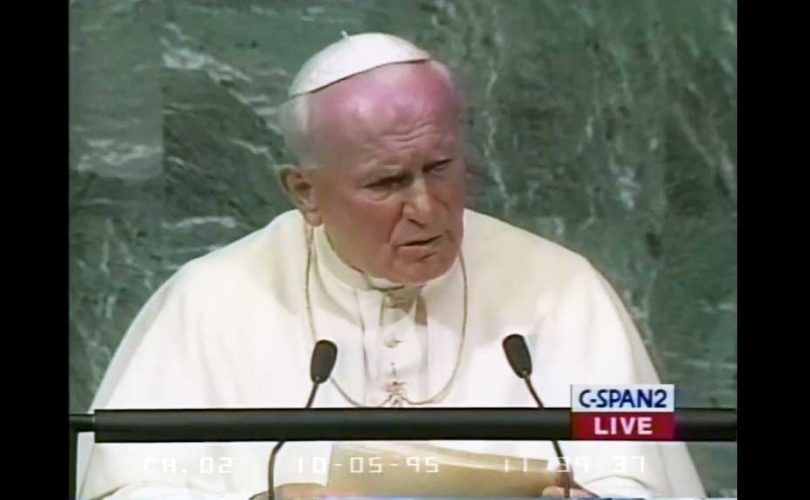 ROME, May 23, 2018 (LifeSiteNews) – A “crisis of truth” in the Church today has put divine law and human freedom in opposition to each other, allowing a “creative” conscience to decide what is good and what is evil, a Catholic philosophy professor warned at the Rome Life Forum last week.

Professor Isobel Camp of the Pontifical University of St. Thomas Aquinas (the Angelicum) demonstrated in her talk how the teaching of St. John Paul II in Veritatis Splendor opposes the notion of the autonomous conscience and its “justifying power” to determine what is good and what is evil. In reality, she argued, the conscience relies not on itself but on the truths of divine law.

Camp explained that in Veritatis Splendor, St. John Paul II affirmed doctrine “placing conscience within the harmonious relationship of [divine] law and [human] freedom.” The professor noted how John Paul II underscored that “there can never be an opposition between the law and freedom which allows a creative conscience to decide what is good and what is evil.”

The Polish pontiff cautioned, she said, against theological trends that placed this “creative conscience” above the Church’s tradition and magisterium.

“These differing schools of thought view a seeming tension or opposition between the law and freedom,” Camp said. “The law is seen as authoritarian, juxtaposed against a notion of freedom ‘which is exalted to the point of idolatry’.”

“Such a separation results in theories of a creative conscience which ‘diverge from the Church’s tradition and her Magisterium’,” she continued.

“Then [John Paul] explains that tensions or dualism between law and freedom leads to a creative conscience: ‘[t]hus the individual conscience is handed the status of a supreme tribunal of moral judgment which hands down categorical and infallible statements about good and evil.”

She noted how the pontiff warned that some authors had even allowed conscience a “creativity” that establishes an opposition between divine law and “the concrete action,” leading to a “kind of double status of moral truth.”

A privileging of “the concrete” could be used to permit a person to do “in good conscience” what is judged as “intrinsically evil by the moral law,” she said, quoting the sainted pope.

“A separation, or even an opposition, is thus established in some cases between the teaching of the precept, which is valid in general, and the norm of the individual conscience, which would in fact make the final decision about what is good and what is evil.”

Camp did not mention Pope Francis’ 2016 exhortation Amoris Laetitia by name, but indicated that John Paul II seemed to anticipate the controversial document when he said this final decision-making power of the conscience was being used as an excuse to make “so-called ‘pastoral’ solutions” contrary to Church doctrine:

“On this basis, an attempt is made to legitimize so-called ‘pastoral’ solutions contrary to the teaching of the Magisterium, and to justify a ‘creative’ hermeneutic according to which the moral conscience is in no way obliged, in every case, by a negative precept,” Camp said, quoting John Paul II. The Sixth Commandment prohibiting adultery is an example of a negative precept. According to the Christian faith, there are no exceptions to negative precepts.

The professor explained how in Veritatis Splendor, John Paul II portrayed the alarming moral consequences attached to the notion of an autonomous (self-justifying) conscience.  The end result is that the conscience, no longer dependent upon divine law, “determines what will bring happiness.”

Using the story of the “rich young ruler” from Matthew 19, Camp pointed out that eternal life, or beatitude, begins in obeying God’s commandments (Matt 19:16). In order to achieve beatitude, the person needs, and has been given, orientation from his Creator.  Natural law, which is founded on the natural inclinations of the human heart, is a participation in divine wisdom, Camp explained.

Camp said that we have a primal awareness of truth; we have an inbred practical reason including such principles as “do good and do evil.” This has been given to us by our Creator, who, while giving us the means and freedom to participate in apprehensions of the good, is the final arbiter of the good.

“Man has an initial determination to the good in order that he can choose particular goods presented to the mind,” Camp explained. “Man cannot create truth ex nihilo and thus cannot create his own morality.”

“Even when he tries to create his own morality, it is always on the perversion of human nature,” she continued. “[H]e cannot ultimately free himself from the reality of good and evil; even if he may desire to call good evil and evil good, he is always torn between that which is good or not, that which ought or not to be done.”