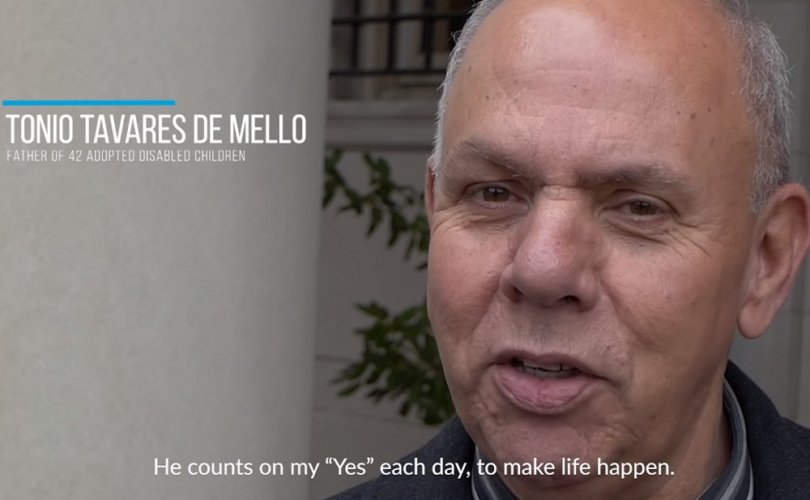 UPDATE December 19, 2020: LifeSiteNews has launched a LifeFunder fundraiser for the Baby Jesus Community. Readers can contribute to the community directly HERE.

PETROPOLIS, Brazil, December 16, 2019 (LifeSiteNews) — The father of 42 adopted children, many of whom were harmed by botched abortions, called on the nations of the world to stop killing disabled innocent babies.

At Brazil’s embassy in Washington, D.C., Tonio Tavares De Mello, the founder of the Jesus Menino Disabled Community, said, “I do this work because it is a special calling from God.” Speaking of his calling, De Mello said in a LifeSite video, “He has a natural gift for life, and He counts on my ‘Yes’ each day to make life happen. I’m giving my life for many lives.”

De Mello founded the Brazilian community in 1990 after being shocked by the living conditions suffered by many disabled orphans. He has adopted 42, some of whom have serious challenges. There are 117 people living in the community.

In reference to abortion, De Mello said in the interview with LifeSiteNews, “To the nations that are trying to implement this procedure, just don’t do it, because your nations will become broken nations. A nation that promotes the death of innocent people or disabled people is not a developing nation, but a dead nation.”

He said finally, “If it wasn’t for this perfect love of God’s trust in me, I couldn’t do it. I can be a full father of 42; it’s because this strength comes from God. It’s not human.”

Reflecting on De Mello’s life and work, Brazilian ambassador-elect Nestor Forster, Jr. said in a LifeSiteNews video, “It’s very deeply touching. As I was saying, he seems to be a saintly man. He’s been doing this for 30 years.” De Mello brought several of the adult disabled members of the community to meet Brazil’s diplomatic representative to the United States.

Forster noted that “most of the kids he has adopted have been victims of abortion, of abortions that went wrong, botched abortions, et cetera.” The diplomat praised the Jesus Menino Disabled Community as an “embassy of heaven on earth.” He added, “It doesn’t get more pro-life than what Tonio does.”

Forster said, “The most fundamental aspect of Christianity is the defense of life because of the sacredness of life, because we believe we are created in the image of God, and because God, Jesus Christ, became man and therefore gave us his own sacredness to all human beings, all humanity. All of them.”

De Mello is among the personalities in a heartwarming new film produced by young Brazilian filmmakers Luiz Henrique Marques and Gustavo Brinholi. HumanLife features interviews and scenes from the lives of De Mello’s adopted children, a tetraplegic artist, and others. In a preview of the movie, De Mello said, “I have 42 adopted children. I embraced a path in my life that I never thought about.”

The film is due to be released during the March for Life in 2020.

On the website of the Diocese of Petropolis, Jesus Menino Disabled Community is described as a Catholic community of consecrated life that seeks to live by the example of the Holy Family, and “through commitments of poverty, obedience and chastity, while welcoming Jesus Christ present in persons with special needs.” The community is located approximately 50 miles north of Rio de Janeiro. “Jesus Menino” means “Baby Jesus” in Portuguese.