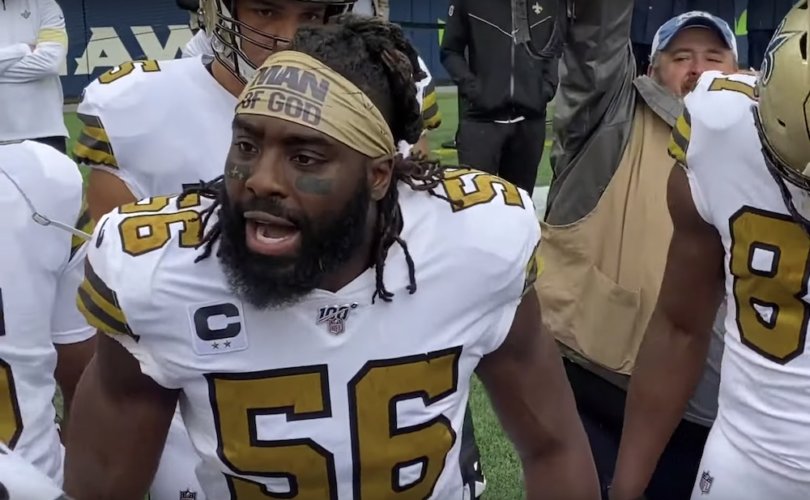 October 9, 2019 (LifeSiteNews) — New Orleans Saints starting linebacker Demario Davis will not be fined after all for wearing a headband sporting the words “Man of God” and announced Tuesday that the controversy has helped raise money for charity.

Last week, Davis announced on Instagram that he had been fined approximately $7,000 for wearing one of the headbands (which are being sold to support the expansion of the emergency department of St. Dominic’s Hospital in Jackson, Mississippi) during the Saints’ game against the Seattle Seahawks as a violation of the National Football League (NFL)’s blanket prohibition against wearing “personal messages” with their uniforms.

NOLA.com reports that other messages to be fined over the years include unapproved product logos and seemingly benign slogans such as “Find the Cure.” The minimum penalty for a first offense is $7,017, with a minimum of $14,037 for a second.

“Of course you don’t want to be fined,” Davis said following the news. “Nobody wants to lose money but I think any time that the conversation about God is brought up, especially in these times, I think it’s always a positive or silver lining. If he can get glory from it, I think he can get glory from it whether I personally wear the headband or don’t wear the headband. He's always gonna be in control of the whole situation. We’re still all good.”

On Tuesday, Davis published another Instagram post announcing that he had won his appeal and would not be forced to pay the fine but has decided to donate the original $7,017 sum to St. Dominic’s.

ESPN adds that the NFL often rescinds fines if a player “demonstrates an understanding of the rule and total compliance with the rule moving forward.” Davis did not wear the headband for the Week 4 and 5 games.

Fining players for wearing non-controversial religious messages stands in stark contrast to the NFL’s handling of the 2017 kneeling controversy, during which numerous players refused to stand for the National Anthem in solidarity with the false claim that American law enforcement is full of racist police officers prone to shooting unarmed blacks. Kneeling during the anthem also violates the NFL’s rules, but beyond a May 2018 policy change that was shelved two months later, the league still does not punish players for doing so.