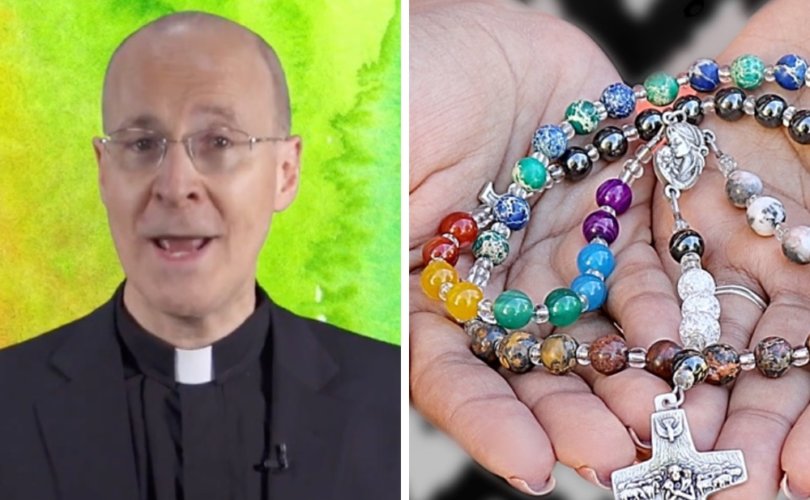 Some of the proceeds from “Rosary of Modern Sorrows” will go to Sister Simone Campbell’s NETWORK, a social justice lobbying group of U.S. Catholic nuns cited as problematic by the Congregation for the Doctrine of the Faith (CDF). Other groups receiving the proceeds include Women for Women International, which promotes contraception and “reproductive health” and has partnered with Planned Parenthood and leftist groups such as Southern Poverty Law Center.

The rosary is the product of social justice group Contemplative Rebellion and has decades comprised of social justice intentions, with the fifth decade consisting of rainbow beads. The suggested prayer for the decade petitions for the “full acceptance” of LGBT couples. Its Charities We Support page lists a numer of problematic partners. The company says it gives 20 percent to 100 percent of its profits to the listed charities.

In 2012 the Vatican’s CDF had censured the Leadership Conference of Women Religious (LCWR), the association of the leaders of congregations of Catholic women religious in the United States representing more than 80 percent of the 57,000 women religious (nuns) in the country, for its positions on pro-life issues, women’s ordination and homosexuality, also naming NETWORK in the process.

NETWORK had worked to undermine the US Bishops’ opposition to Obamacare because of abortion funding.

Campbell pushed for swift passage of Obamacare; despite concerns it meant the largest expansion of abortion since Roe v. Wade, which she dismissed as “insignificant details,”

In addition to supporting NETWORK, the rainbow-rosary making group funds other non-profits that support abortion, including the radical Southern Poverty Law Center (SPLC).

The Pentagon cut its ties with SPLC as a training resource on extremism last year.

The group paid nearly $3.4 to settle a defamation suit earlier this year to an organization it falsely labeled anti-Muslim extremists. Some 60 other organizations were in the process of considering bringing similar legal action against SPLC.