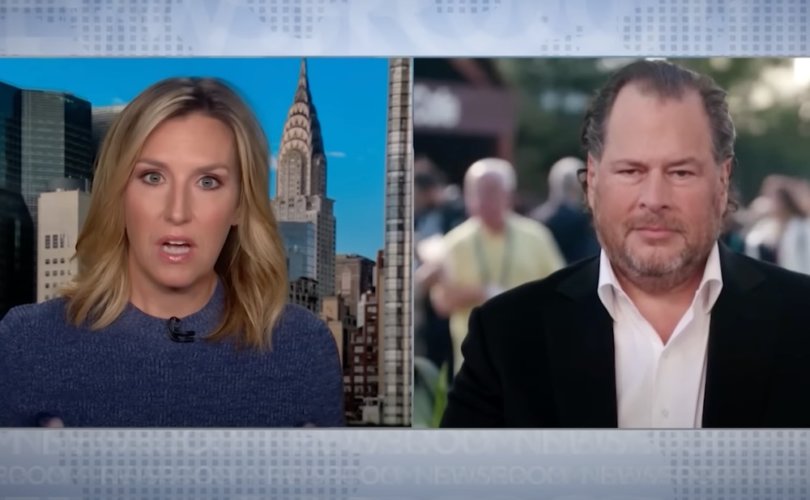 INDIANAPOLIS, Indiana (LifeSiteNews) – The CEO of Salesforce implied conservative politicians are “crazy” and criticized states that protect human life in the womb by prohibiting abortion.

Salesforce CEO Marc Benioff told Poppy Harlow on CNN that he has to deal with “crazy presidents, crazy governors, crazy mayors all over the world, in every country, in every city, in every state,” when she asked about how his company is responding to the reversal of Roe v. Wade.

“Who is crazy?” Harlow asked during the September 22 interview.

“I’m talking about all the situations I’ve had to go through over the last decade, especially where our employees will contact me and say something just is not right,” Benioff responded. His company also allied with homosexual activists and leftist groups in 2015 to water down Indiana’s religious freedom law – at the time he also threatened to leave the state unless he got his way.

Benioff would not say if he plans to pull employees out of Indiana, which recently passed a law that will prohibit 95 percent of abortions. During the same interview, Benioff would not answer Harlow’s question if any employees had taken him up on his offer to relocate – in 2021, he offered to help Texas employees move in the wake of the state’s passage of a heartbeat bill.

The company has received over $17 million in subsidies from Indiana taxpayers.

“If you’re not for equality and dignity, this is not something we can work with and we’ll have to exit your city or state as we have in many places,” Benioff said.

The company has locations in blue cities and states, including San Francisco, Boston, Chicago, and New York. However, it also continues to employ people in Dallas, Indianapolis, and Atlanta, all three in states with strong pro-life protections.

LifeSiteNews contacted Salesforce’s media team on Monday morning and asked for clarification if Benioff’s comments on “crazy” leaders mean those who pass laws against abortion or in support of religious liberty, if he had any concerns his comments would alienate center-right employees, and if it would support Indiana candidates who are pro-abortion but advocate fiscal policies that could hurt the company’s profits.

The president of a conservative group that is critical of corporate power and works to staff the halls of Congress and presidential administrations with “nationalist [and] conservative” personnel criticized Salesforce and urged conservative legislators and organizations to take action.

“Red states need to stop giving sweetheart deals to corporations that hate them, their voters, and everything they stand for,” Saurabh Sharma, president of American Moment, told LifeSiteNews on Monday. “They are planting the seeds of their own destruction if they don’t start being more intentional about their public policies.”

“It’s not enough to just attract business to your state by giving out corporate welfare,” he warned. “You need to attract voters who support your agenda and companies that will not try to undermine it on a daily basis.”

“Salesforce itself is a general liability” to conservative groups, Sharma warned. He noted that many groups use it to maintain lists of donors and other “critical data.”

“Every moment that an organization is still on Salesforce is a moment that their data is unsafe and at risk of being exploited by one of the wokest companies around,” Sharma said.

Another conservative leader who is critical of woke corporate power told LifeSiteNews that CEO Marc Benioff should stop using the company’s money to push his own political agenda.

“Benioff talks about the need for equality. If he cared about equality, he’d offer equal terms to all of his employees: the right to move to states whose policies best fit their values, all on the company dime. He doesn’t care about equality, though,” Scott Shepard, director of the Free Enterprise Project at the National Center for Public Policy Research, said in an email to LifeSiteNews on Monday.

“He cares only about pushing his hard-left personal policy preferences using shareholder money rather than his own,” he said. “That’s already illegal – a violation of his fiduciary duty – and should set him up for personal liability.”

“But to the extent that this is not clear under state law, such law must be reformed so that Benioff and his woke corporate cadre are made to pay when they steal the influence arising from their investors’ capital to push their narrow, and usually execrable, policy preferences,” Shepard said.

A Troy University professor who runs a program to help college students learn about how to fight wokeness in corporations shared similar sentiments.

“Whenever consumers feel that a corporation has taken a political stance at odds with their own, they should refrain from buying that corporation’s products or services,” Professor Allen Mendenhall told LifeSiteNews. “Christians and pro-lifers should avoid Salesforce unless Mr. Benioff repudiates his reckless remarks and apologizes. The rise of ESG [environmental, social and governance] has emboldened irresponsible executives like Mr. Benioff to issue unhinged remarks that reveal how much they disdain their own customers.”