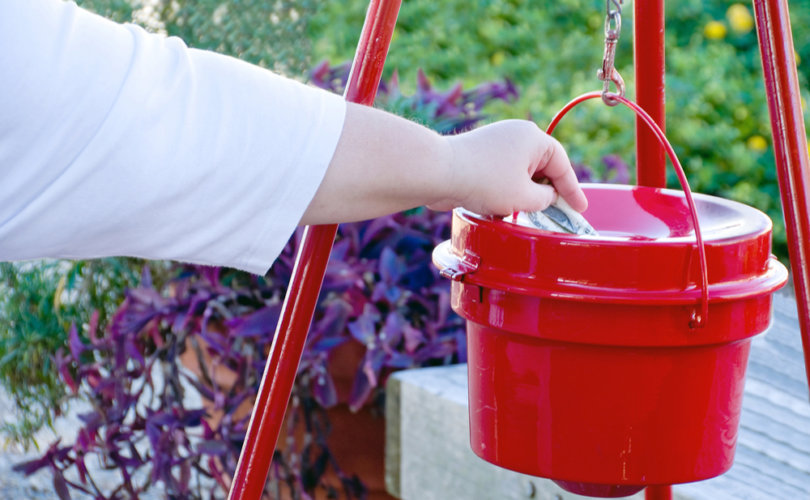 (LifeSiteNews) — Charity-minded Canadians interested in ringing a bell for the Salvation Army this Christmas season won’t be permitted to do so unless they’ve had the full regimen of experimental COVID-19 shots thanks to a government mandate.

The policy went into effect November 15 and forces current and prospective volunteers and staff members to show proof of “full vaccination” in order to participate in traditional holiday fundraising efforts with the Salvation Army, an international charitable organization and Christian denomination founded in 1865.

“As the largest provider of social services in Canada outside of the government, we have been federally mandated to have all staff and volunteers fully vaccinated,” said Tamara Robinson, director of family services and community outreach with the Army.

The move to push volunteers and staff members to get the jab comes in spite of the fact that coronavirus vaccine trials have never produced evidence that the injections stop infection or transmission of the virus.

Experts do not even claim the injections reduce hospitalization, instead measuring the drugs’ success in terms of whether or not they prevent severe symptoms of COVID-19. Moreover, there is strong evidence that the “vaccinated” are just as likely to carry and transmit the virus as the unvaccinated.

The Salvation Army Canada — a church, and one of the largest social service organizations in the country — internally released their policy that requires all of their officers, employees, contractors and volunteers to be fully vaccinated for COVID-19. https://t.co/pm4Z9FLHsu

The spokesman, Salvation Army lieutenant colonel John Murray, added that the charity “continues to follow all provincial and federal public health policies and guidelines as it relates to COVID-19 because our number one priority remains the health, safety and well-being of our clients, employees, officers, volunteers, guests, donors and communities.”

In a disclaimer beneath its volunteer application webpage, the Canadian arm of the Salvation Army stated that prospective volunteers “will be required to be fully vaccinated against COVID-19 and provide proof of full vaccination” in accordance with the organization’s “support of our commitment to a healthy and safe workplace and community.”

Some exceptions to the mandate will be made for those who have a reason “protected by the Human Rights Code” to refrain from getting the shot, The Salvation Army stated, adding that “written proof satisfactory to [the Salvation Army] will be required.”

The mandate has had a devastating effect on some of the charity’s operations and drawn pushback from many of its members.

Last month, a Salvation Army location In Williams Lake, British Columbia, reported a loss of roughly 80% of its volunteers along with some staff members as a result of the injection requirement.

Salvation Army member and 25-year Red Kettle campaign volunteer Connie Fournier told True North she is “beyond hurt that my own church is engaging in medical segregation.”

Fournier argued that the policy “goes against everything” 19th century English preacher and Salvation Army founder William Booth represented, noting that the organization “was formed to minister to the most downtrodden and socially rejected members of society.”

“Today, they themselves are doing the rejection,” Fournier said.

In a press release, the Salvation Army said it “was never our intention” to cause “some to believe we think they should apologize for the color of their skin, or that The Salvation Army may have abandoned its Biblical beliefs for another philosophy or ideology.”

The sensationalist claims that The Salvation Army has entered a political war are simply not true. Please see our response here: https://t.co/xnrARVTRnn