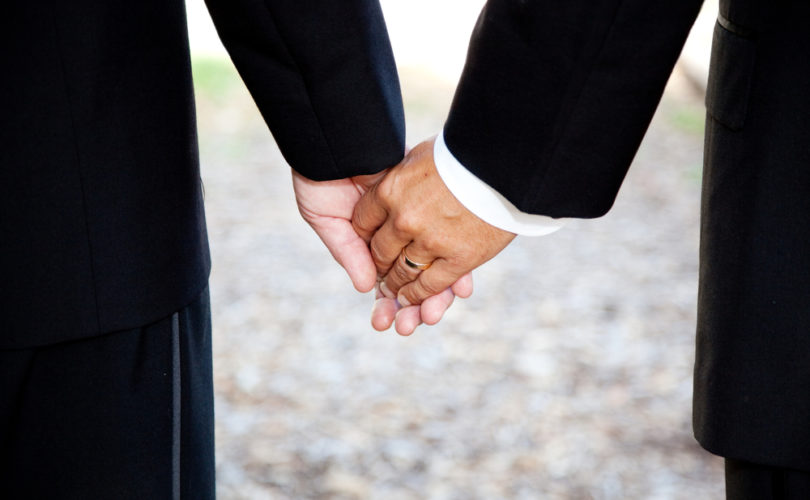 Same-sex “marriages” have begun in five states after the Supreme Court allowed lower court rulings to stand, although the residents of those states oppose same-sex “marriage” in some cases by a two-to-one margin.

“The will of the people has now been overridden by unelected federal justices, accountable to no one,” said Oklahoma Gov. Mary Fallin, a Republican. “That is both undemocratic and a violation of states' rights,” which have been “trampled by an arrogant, out-of-control federal government that wants to substitute Oklahoma values with Washington, D.C., values.” Her attorney general, Scott Pruitt, said, “As recently as 2013, the Supreme Court in the Windsor case recognized that marriage is a state institution and that states in fact do have primacy in determining what constitutes the definition of marriage. That makes the decision today by the Supreme Court not to take up these cases for review even more troubling.”

Nonetheless, on Monday the state's largest county, Oklahoma County, began issuing “marriage” certificates to same-sex couples. County District Attorney David Prater said, “I swore on the constitution to uphold the law and the courts. And I stand by that oath, no matter what they decide.”

An Oklahoma poll in June found two-thirds of Oklahomans oppose same-sex “marriage” – with 58.1 percent saying they strongly oppose it.

In heavily religious Utah, Gov. Gary Herbert said at a press conference today, “While I continue to believe states should have the right to define marriage and create laws regarding marriage, ultimately we are a nation of laws, and we here in Utah will continue to uphold the law.” Hebert instructed his cabinet officers that “each agency should conduct business today and going forward, recognizing all legally performed same-sex marriages. Please make adjustments to any forms or other processes, as appropriate.”

He implored his fellow “Utahns, regardless of their personal beliefs on this issue, to treat each other with respect and kindness as we transition to this new law.”

His remarks came just after Mormon leaders affirmed their commitment to normative marriage. Dallin H. Oaks of the church's Quorum of the Twelve addressed the issue at the Church of Jesus Christ of Latter-Day Saints' biannual conference – the third such conference to affirm heterosexual marriage. A Zions Bank/UtahPolicy.com poll conducted in August found that 61 percent of Utahns oppose same sex marriage; only 29 percent support it. Fully 88 percent of “very active” Mormons oppose redefining marriage.

Indiana began issuing “marriage” certificates today, as well. “I will always believe in the importance of traditional marriage and I will always abide by the rule of law,” Gov. Mike Pence, a dark horse candidate for the 2016 Republican presidential nomination, said. “People are free to disagree with court decisions but we are not free to disobey them.” Marion County said officials would not conduct ceremonies today, but couples could pick up the forms at once.

A January poll found that 53 percent of Indiana residents support a constitutional ban on same-sex “marriage.” Indiana ACLU Legal Director Ken Falk told the Indianapolis Star, “There is nothing that can be done by way of an Indiana constitutional amendment or Indiana law to alter that fact. To say that we're ecstatic about this is perhaps an understatement.”

Micah Clark, executive director of the American Family Association of Indiana, called the decision “a Pandora's box” for the state's religious majority. “What does this mean for churches, religious charities, business owners, and those tied into the wedding industry? What do they do if their moral conscience conflicts with what the state says marriage is?”

In deep purple Wisconsin, Gov. Scott Walker, a likely 2016 Republican presidential contender, told the Associated Press, “For us, it's over. The federal courts have ruled that this decision by this court of appeals decision is the law of the land and we will be upholding it.” Wisconsin state Attorney General J.B. Van Hollen, a Republican, said, “I encourage everyone to respect the Court’s action and to administer the law fairly and impartially.” Dane County, which includes the liberal hotbed of Madison, began issuing marriage licenses shortly after the announcement.

The one Democratic governor affected by today's decision, Virginia Gov. Terry McAuliffe, greeted the ruling with joy. “This is a historic and long overdue moment for our Commonwealth and our country,” said McAuliffe who, with state Attorney General Mark Herring, refused to defend the state constitution in court. Ted Olson, the solicitor general during the George W. Bush administration, called the decision “a momentous victory,” adding, “Today, I am proud to call myself a Virginian.”

But the author of the state's marriage protection amendment warned of the negative consequences that will flow from this decision. “Once natural marriage is abolished marriage will soon include polygamy,” State Delegate Bob Marshall said, “leaving innocent children to suffer the consequences.”

“The Founders gave Congress vast authority over the cases federal courts are permitted to rule on,” he said, stating that leaders could exempt marriage from judicial oversight.

“Failure of Members of Congress or candidates for Congress of either political party to rein in such abuses of power by federal judges by abolishing their ability to hear such cases as is expressly provided for in the Constitution should be disqualified from holding office,” Marshall said.