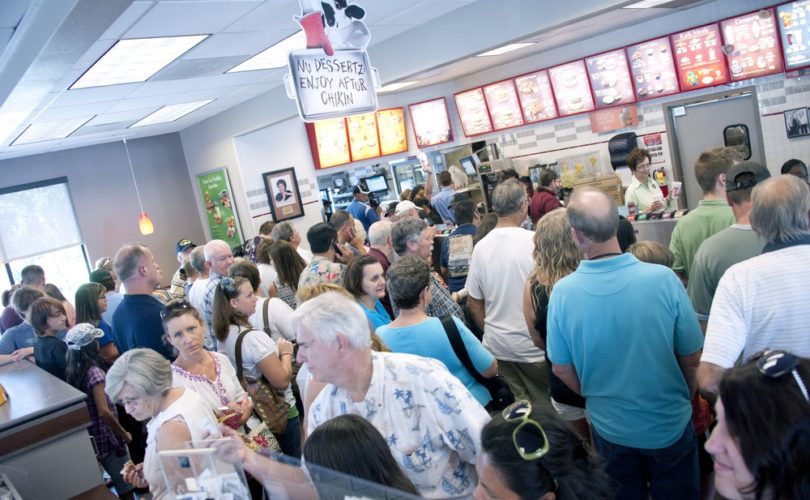 Chick-fil-A was one of several vendors the company Paradies Lagardère proposed adding to the airport’s Terminal A, but its inclusion was voted down 6-4 Thursday, with Councilwoman Rebecca Viagran abstaining, Out in SA reports. The dissenting councilmen — Art Hall, Greg Brockhouse, John Courage, and Clayton Perry — argued that more time was needed to review the contract.

“With this decision, the City Council reaffirmed the work our city has done to become a champion of equality and inclusion,” declared Councilman Roberto Treviño, who introduced the motion to replace Chick-fil-A. “San Antonio is a city full of compassion, and we don’t have room in our public facilities for a business with a legacy of anti-LGBTQ behavior[.] … [E]veryone should feel welcome when they walk through our airport.”

Chick-fil-A is famously operated on the Christian principles of its national leadership, including closing on Sundays, listing “to glorify God” as part of its corporate purpose, and its active charitable arm. For years, liberals have advocated boycotting the chain due to CEO Dan Cathy’s stated opposition to same-sex “marriage” and the company’s past donations to social conservative groups such as Family Research Council and Focus on the Family.

Out in SA also cited a report from the left-wing ThinkProgress complaining that despite prior reports indicating that Chick-fil-A might be scaling back such donations, recently released tax filings show the company donated more than $1.8 million in 2017 to the Fellowship of Christian Athletes, Paul Anderson Youth Home, and Salvation Army, all of which have been attacked as “anti-LGBT” for taking traditional biblical stances on homosexuality.

“We have a fundamental code of conduct at Chick-fil-A: Do unto others as you would have them do unto you,” a Chick-fil-A representative responded in a statement to Fox News. “The 140,000 people who serve customers in our restaurants on a daily basis represent and embrace all people, regardless of race, gender, ethnicity, sexual orientation or gender identity. Our intent is to have a positive influence on all who come in contact with Chick-fil-A.

“We would still welcome the opportunity to have a thoughtful dialogue with the city council and plan to reach out to them,” the statement continued. “It’s unfortunate that mischaracterizations of our brand have led to decisions like this. The sole focus of the Chick-fil-A Foundation is to support causes focused on youth and education. We are proud of the positive impact we are making in communities across America and have been transparent about our giving on our web site.”

Despite pro-LGBT activists’ common insinuations that the company’s Christian conservatism translates to “excluding” or otherwise mistreating anyone, many homosexual employees and customers have attested to positive, welcoming experiences with Chick-fil-A.

Republican Sen. Ted Cruz of Texas, an outspoken social conservative, was less diplomatic, tweeting that the City Council’s decision was “ridiculous” and inconsistent with the Lone Star State’s values:

The details of this story are even worse. San Antonio City Council voted to ban ⁦@ChickfilA⁩ from the airport bc the company gave to…the Fellowship of Christian Athletes & the Salvation Army?!? That’s ridiculous. And not Texas. #LeftistIntolerance https://t.co/ApTnlpS2E0

Other institutions that have attempted to exclude Chick-fil-A include Johns Hopkins University, Duquesne University, the University of Nebraska Kearney, Rider University, and the DICK’S Sporting Goods Pittsburgh Marathon. New York Mayor Bill de Blasio and Twitter CEO Jack Dorsey are among the prominent figures who have condemned the company as beyond the pale.