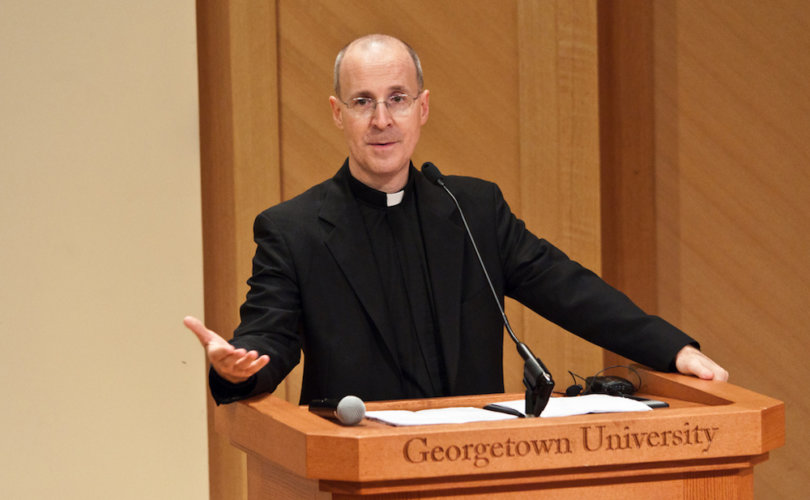 McElroy was among those who labeled reports and commentary on Father Martin’s LGBT stances as homophobia, censorship, “verbal violence,” and being a “cancer of vilification” in the Church. The bishop said Father Martin’s critics were overemphasizing chastity and they resent Pope Francis’ call for Catholics to move away from judging others.

“There has arisen both in Catholic journals and on social media a campaign to vilify Father Martin,” Bishop McElroy wrote in America Magazine, “to distort his work, to label him heterodox, to assassinate his personal character and to annihilate both the ideas and the dialogue that he has initiated.”

“This campaign of distortion must be challenged and exposed for what it is,” McElroy continued, “not primarily for Father Martin’s sake but because this cancer of vilification is seeping into the institutional life of the church.”

“The concerted attack on Father Martin’s work has been driven by three impulses,” Bishop McElroy stated further, “homophobia, a distortion of fundamental Catholic moral theology and a veiled attack on Pope Francis and his campaign against judgmentalism in the church.”

The Theological College rescinded the invitation late last week to Father Martin to present a symposium on “Encountering Jesus” at its Alumni Days on October 3-4.

Father Martin predictably persisted in the claim that those taking issue with his representation of Catholic LGBT ministry are guilty of hate and homophobia.

The reaction from academia had a number of elements. Some likened the withdrawal of the invitation as quashing free speech on campus. Others tried to dissociate themselves from the cancellation or avoid exhibiting support for Father Martin.

Still other Father Martin supporters maintained the flawed notion that the pushback stems primarily from his contention that the Church is not welcoming enough to LGBT Catholics. They discount the fact that he is putting souls at risk via public encouragement of homosexuality. They claim as well that organizations and individuals reporting and commenting on Father Martin’s troubling comments have as much influence as the priest.

LifeSiteNews sought comment from the College on Father Martin’s appearance after receiving an inquiry from a concerned local Catholic about the priest’s numerous provocative statements and stances that conflict with Church teaching on sexual morality.

The Theological College did not respond to the LifeSite inquiry before issuing the cancellation.

LifeSite and ChurchMilitant.com reported on the Equestrian Order of the Holy Sepulchre withdrawing a speaking invitation for Father Martin late last month. The Order said the invitation was “extended last year before the most recent controversies,” as well as ongoing coverage of the high profile Jesuit’s problematic comments.

Father Martin, the editor at large for Jesuit-run America Magazine and consultant to the Vatican on its communications operations, has remained the subject of social and other media coverage with his efforts to promote his book, his vast social media presence, and his controversial statements about LGBT issues.

Two of those instances took place at recent appearances Father Martin made at Catholic universities.

While visiting Villanova University on August 29, Father Martin responded to a male gay-identifying Catholic journalist who expressed unease over showing physical affection to his same-sex partner during the sign of peace at Mass. “In 10 years, you will be able to kiss your partner or soon to be your husband. Why not? What’s the terrible thing?”

On September 5 at Fordham University, Father Martin called for gay relationships to be “reverenced.” He also gave instances of same-sex partnerships as examples of love as well as a model of fidelity from which the Church could learn.

Father Martin’s comments challenging the Church’s sexual morality have been extensive. He has told Catholics with same-sex attraction that God made them that way and their inclination is part of their identity. He has misinformed people that Church teaching on homosexuality could change, stating that the Church should redo its catechism language on homosexuality to be more welcoming and claiming that some saints in heaven were probably gay.

He repeated again for America Magazine after cancellation of his Theological College appearance that he avoided topics of sexuality in his book because it is not about the sexual behavior of LGBT people. “It’s on dialogue and prayer,” he said.

And just as critics say he affirms homosexual inclinations and activity while neglecting to include the Church’s teaching that everyone is called to be chaste, he said, “It’s amazing that for some Catholics the only lens that they can see LGBT through is sex.”

LifeSiteNews’ coverage of Father Martin’s LGBT activism has continually cited the catechism and other Church principles in contrast to the high profile Jesuit’s statements.

Aside from magisterial Church teaching, this has also included the 2004 USCCB statement Catholics in Political Life that states in part, “The Catholic community and Catholic institutions should not honor those who act in defiance of our fundamental moral principles. They should not be given awards, honors or platforms which would suggest support for their actions.”

Faggioli wrote, “It was linked to a campaign of hatred and personal attacks against the priest.”

“This sort of vitriol is profoundly changing the communion of the Catholic Church,” he said. “And not just in its ethos, but also in the way it functions. It signals a new kind of censorship that uses verbal violence to intimidate individual Catholics, as well as institutions within the Church – institutions that exist (also) to protect the rights of Catholics.”

Faggioli also lumped blogger Father John Zuhlsdorf in with “cyber militants” who are part of the “age of anger” resulting from “more than 30 years of episcopal appointments under John Paul II and Benedict XVI, which recast the U.S. episcopate in the image of the ‘cultural warrior.’”

He called those behind the cancellation “small groups” and “fringe groups” who are “active mostly in cyberspace,” but said as well that the cancellation of this and other talks “confirms that these groups have power in the Church and can influence important institutional decisions.”

Faggioli also sought to draw a synoptic parallel between “the neo-Nazi and white supremacist rally in Charlottesville, Virginia, and this latest campaign against Fr. James Martin.”

America editor in chief and President Jesuit Father Matthew Malone said in a statement that event sponsors felt compelled to withdraw the invitations “in light of the public controversy surrounding Father Martin’s recent book, 'Building a Bridge: How the Catholic Church and the L.G.B.T. Community Can Enter into a Relationship of Respect, Compassion, and Sensitivity.'”

He said most readers and commentators have welcomed the book, and others have raised questions about “its thesis,” the criticism usually intelligent and charitable.

“Some elements in the American church, however, have taken it upon themselves to organize a campaign, not only against the contents of the book but against Father Martin himself,” Father Malone wrote. “In recent weeks, Father Martin has been subjected to repeated, calumnious attacks in social media and in print, involving invective that is as appalling as it is toxic.”

“It is one thing to engage in spirited debate,” he continued. “It is another thing to seek to stymie such debate through fear, misinformation, or blunt censorship. The campaign against Father Martin, waged by a small but influential faction in the U.S. Church, is unwarranted, uncharitable, and un-Christian.”

Father Martin told America regarding the negative reaction to his message, “The level of hate, personal attacks and homophobia is breathtaking.”

Continuing this narrative, the Jesuit said further that the institutional Church is facing a bigger challenge, and employed the internet slang term “troll” for those to whom he and his supporters attribute a campaign of hate.