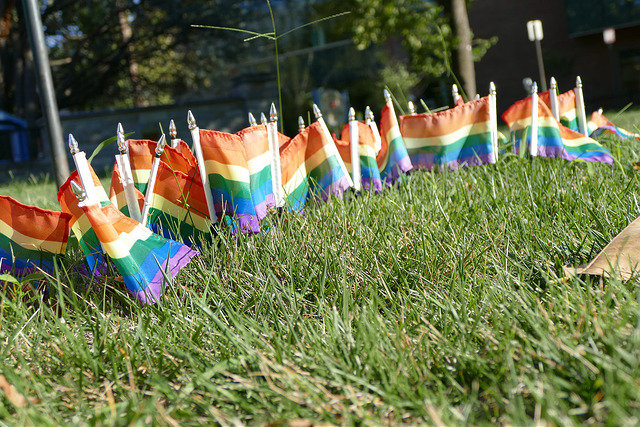 SAN DIEGO, California, December 6, 2016 (LifeSiteNews) – The director of the young adult ministry at a parish San Diego Bishop Robert McElroy recently praised for its “welcoming” attitude toward “LGBT worshippers” is an openly gay man who works for an organization that supports same-sex “marriage” and women's ordination.

The San Diego Union Tribune  reported that McElroy cited St. John the Evangelist in Hillcrest as an example of a parish where “LGBT worshippers 'feel particularly welcome.'”

“That’s a very good thing,” he said. McElroy was commenting on the Diocese of San Diego's recent synod on the family, after which he encouraged priests to give Holy Communion to the divorced and “remarried” and embrace “LGBT families.”

St. John the Evangelist advertises on its Twitter page: “In worship and in sacrament, our Catholic parish is called to extend God's kingdom to young and old, gay and straight, single, married or divorced.” Its rainbow Twitter profile photo reads, “All Are Welcome.”

On November 18, the parish Facebook page advertised a “Modern Mass…where all people find a place at the table!” Its advertisement for the Mass featured a cross imposed on the rainbow flag, a universal symbol of homosexual activism.

Bianco's LinkedIn page lists him as a “Pastoral Associate” with Call to Action, a dissenting anti-Catholic group that opposes the Church's teaching on homosexuality, marriage, and the nature of the priesthood. In 2006, members of Call to Action were excommunicated over their dissenting advocacy.

Call to Action's website features a “prayer for all loving marriages” that reads, in part:

We thank You for all the different types of marriages in our world:
young couples beginning a life together,
as well as couples celebrating decades of love,
re-married couples and those who found each other later in life,
couples whose marriages are recognized by our state and our Church,
and same-sex couples who are denied that recognition
but who continue to bravely model love and commitment in the face of discrimination…

Help us support marriage and family in all of its diversity
and guide us as we speak out against oppression in our Church.
Lead us toward the day when all loving unions will be seen as sacred
and all couples will have the support and recognition of their faith communities.

“The call to the priesthood should be celebrated regardless of gender,” Call to Action's website says on its “Women and Girls Equality” page. “We work in many different ways to restore the full participation of women in the liturgy, pastoral life and leadership of their communities…We support the ordination of women with local actions, national media advocacy and with our partners in the movement. Many of our members attend liturgies led by womenpriests.”

According to Call to Action, Bianco began as a Program Outreach Associate in 2015. In one blog post for the organization, he describes attending a Dignity USA conference on behalf of Call to Action. Dignity USA is a pro-gay group that rejects the Catholic Church's teaching on human sexuality.

It appears that McElroy is well aware of Bianco's gay advocacy. In 2015, the Wall Street Journal wrote that after he became bishop, McElroy told Bianco that he could continue running cathedral parish education programs even though he is openly gay:

Shortly after his installation as the sixth bishop of San Diego this spring, Robert McElroy was approached by a church employee in the city’s downtown cathedral.

Aaron Bianco, a 41-year-old openly gay man who had helped run Catholic education programs for seven years, said that before the bishop’s appointment, a parishioner who knew of Mr. Bianco’s sexual orientation had complained to the diocese, a traditionally conservative one that once denied the owner of a gay nightclub a Catholic funeral.

Fearful of losing his job, Mr. Bianco removed his name from the weekly parish newsletter and brought someone in to help him teach.

But the new bishop assured Mr. Bianco that he wouldn’t lose his job because he is gay. Bishop McElroy “let me know that [being gay] should not hinder me from participating fully in the life of the church,” said Mr. Bianco, who has since taken another position outside the church.

The Wall Street Journal article also noted that in 2010, McElroy became an auxiliary bishop in San Francisco, where he celebrated Mass at “a largely gay parish in the city’s Castro district.”

The Diocese of San Diego did not immediately respond to LifeSiteNews's inquiries on whether the “welcoming” nature of St. John's is in line with Catholic teaching on homosexual feelings and actions (not people) being intrinsically disordered, or whether the diocese finds it appropriate for St. John's to advertise the rainbow flag on its social media pages.