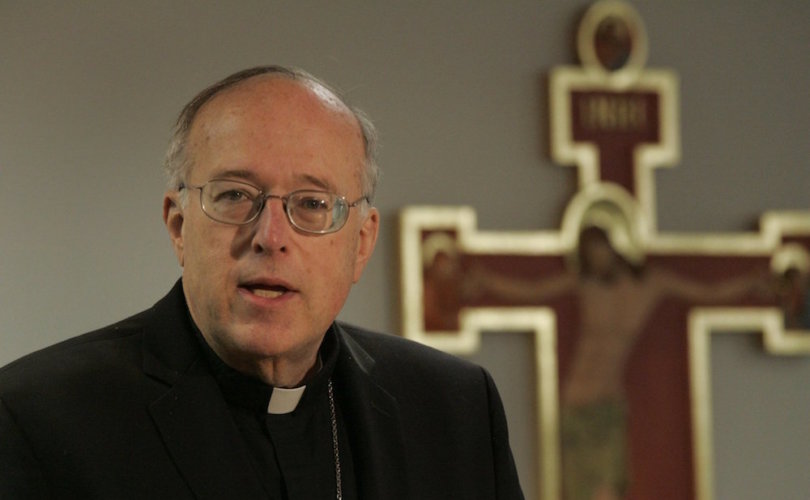 February 7, 2018 (LifeSiteNews) — San Diego Bishop Robert McElroy said recently that there is “repugnant” and “corrosive” bigotry toward individuals identifying as LGBT on the part of “a group of people across all religious views.”

This “particularly antagonistic” regard for LGBT individuals by people in this group generates from the depths of the souls, Bishop McElroy said. It is a reality that must be faced and one that is “incompatible with what we hope to be as a church.”

The bishop was cited and quoted by New York Times columnist Frank Bruni for a recent “The Scariest Catholic in America” op-ed that focused on another Catholic venue rescinding a speaking engagement from controversial Jesuit Father James Martin.

Martin’s talk at the Diocese of Metuchen’s Our Lady of Lourdes parish in Whitehouse Station, New Jersey, scheduled for February 15, was cancelled after concern was expressed over the priest’s appearance. A petition from The American Society for the Defense of Tradition, Family and Property (TFP), a lay Catholic organization, asked the parish to host a “Catholic speaker who respects Catholic moral teaching and honors God's law.”

The Martin event was moved to a secular venue.

It was at least the fourth cancellation of a Martin appearance by a Catholic organization in recent months related to his problematic presentation of LGBT issues.

The Catholic University of America’s Theological College and the Equestrian Order of the Holy Sepulchre rescinded speaking invitations to Martin last fall, and another cancellation reportedly occurred for a London appearance by Martin for CAFOD, the official overseas aid agency of the Catholic Church in England and Wales.

Martin continues to be welcomed as a speaker at other Catholic institutions.

Martin and others sympathetic to his take on LGBT issues have issued scathing replies to the cancellations.

These have often conflated media outlets reporting on the controversy with individual social media response, and tried to equate honest critiques of Martin’s actions and statements with attacks on his character.

They have also cast criticism of Martin as “homophobia” and “censorship” from the “far right,” the so-called “Catholic alt-right” and “Catholic cyber militias,” with a number of such pronouncements directed at LifeSiteNews.

Another strategy that Martin apologists use is to bypass his problematic affirmation with homosexuality and say his scheduled topic at a given Catholic venue was to focus on something other than LGBT issues — ignoring the scandal of his overall efforts to normalize homosexuality.

Martin called TFP “a far-right online group” in a tweet on his latest pulled appearance, saying “I lament this caving into bullies.”

He went on in a subsequent tweet, “It's time for bishops, priests and lay leaders finally to stand up to the hate-mongering of online groups with no standing whatsoever in the church, who seek to substitute their spurious authority for legitimate church authority, and who seek to run the church by fear and hatred.”

Bruni’s NYT op-ed last weekend followed a number of others that framed Martin in an exceedingly laudatory light, beginning by calling him “a Roman Catholic rock star.”

It also minimized Martin’s troubling presentation of the LGBT issue, contending that all he has done is call for Catholics to be more respectful and compassionate to LGBT-identifying individuals.

The op-ed continued in the vein of aggrandizing Catholic pushback for Martin’s actions, using such terms as “far-right Catholic groups,” “the far right” and “ultra-conservatives.”

“The vitriol to which he has been subjected is breathtaking,” Bruni wrote of the provocative Jesuit, “a reminder not just of how much homophobia is still out there.”

He said in his piece that he talked to McElroy about the issue.

“McElroy said that while there are calm-voiced critics of Father Martin with earnest concerns about what they see as the church’s drift from traditional sexual morality,” Bruni wrote, “there are also out-and-out bigots whose methods are ‘incompatible with what we hope to be as a church.’”

“We have to face the fact that there is a group of people across all religious views that are particularly antagonistic to LGBT people,” McElroy told him. “That comes from deep within the human soul, and it’s really corrosive and repugnant.”

“Campaign of distortion,” “cancer of vilification”

McElroy was among those critical of the Martin cancellations early on. He wrote last fall that opposition to Martin’s speaking engagements was a “campaign of distortion” that “must be challenged and exposed, calling it a “cancer of vilification is seeping into the institutional life of the church.”

McElroy said as well that it was a “concerted attack” on Martin’s work, driven by homophobia, a “distortion of fundamental Catholic moral theology” and “a veiled attack on Pope Francis and his campaign against judgmentalism in the church.”

Martin is the American Jesuit priest, writer and editor-at-large of the Jesuit America magazine. Pope Francis named him as a consultant to the Vatican’s Secretariat for Communications in April 2017.

Father Martin has made numerous troubling public assertions regarding homosexuality that are at odds with Church teaching. They include, among others, suggesting that God created homosexuals as they are and that chastity is not required of homosexuals. He has stated that Catholics should reverence gay marriage, and gave his support to transgenderism in children and the idea of gays kissing at the sign of peace during Mass.

Martin’s critics say his affirmation of homosexual activity to same-sex-attracted individuals and puts their souls at risk — as Church teaching holds that sexual activity is reserved for marriage and only between a man and a woman.

Martin regularly charges critics of his message with hate, homophobia and as having latent homosexual tendencies, and allows vitriol in response to his critics from his large social media following.

Where does the bridge lead?

Martin’s book from last June, Building a Bridge, which has the endorsement of four U.S. bishops, a fifth from New Zealand and several other high-ranking prelates, is promoted as a call for the Catholic Church to be more welcoming to Catholics who identify as LGBT.

The Jesuit told The New York Times last June around the time of the book’s release that “pretty much everyone’s lifestyle is sinful.”

In the book, Martin calls for the Church to stop firing employees who publicly violate Catholic teaching on sexual morality – despite this being a long-established expectation of Catholic Church staff, and he also calls for language on homosexuality in the Church’s catechism to be changed to be less hurtful to those who identify as homosexual.

The book is based upon Martin’s acceptance speech for winning the Bridge Building Award from New Ways Ministry – a pro-gay group condemned by the Congregation for the Doctrine of the Faith and the U.S. Catholic bishops.

Catholic critics have said the book undermines the Church’s teaching on human sexuality, with some theologians saying Martin’s book is “slick dissent, “scandalous” and “full of ambiguity” and proposes an “alternate catechism.”

Philadelphia Archbishop Charles Chaput wrote of Martin’s message last July that Jesus “didn’t come to affirm us in our sins and destructive behaviors – whatever they might be — but to redeem us.”

“The Church is not simply about unity – as valuable as that is,” Chaput said, “but about unity in God’s love rooted in truth.”

Cardinal Robert Sarah, Prefect of the Congregation for Divine Worship and the Discipline of the Sacraments, described Martin in a Wall Street Journal op-ed last August as “one of the most outspoken critics of the church’s message with regard to sexuality.”

The cardinal echoed other critics of Martin’s book in saying authentic Catholic outreach to homosexuals only occurs in light of the Church’s moral teaching.

“People who identify as members of the LGBT community are owed this truth in charity,” Cardinal Sarah wrote, “especially from clergy who speak on behalf of the church about this complex and difficult topic.”

McElroy formally endorsed Martin’s book. The bishop has commended one of his LGBT-affirming parishes for its “particularly welcoming” approach, and he has said the Catechism of the Catholic Church language defining homosexual acts as “intrinsically disordered” is “very destructive language that I think we should not use pastorally.”