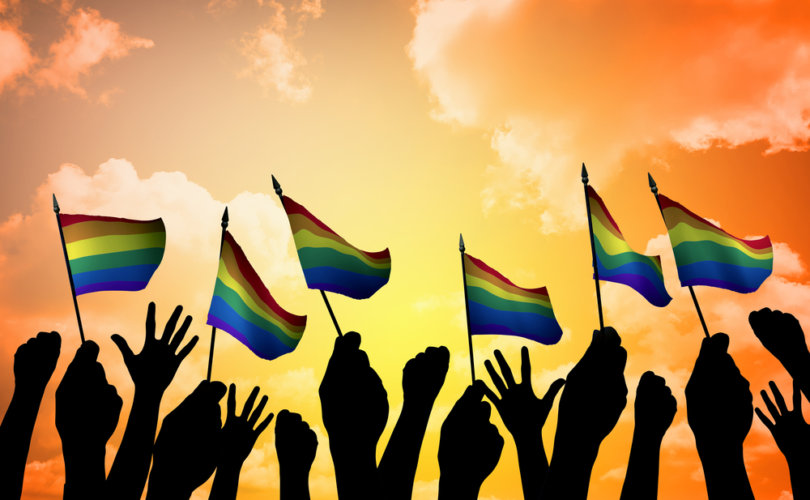 Following a much-hyped diocesan synod on the family last month, Bishop McElroy encouraged priests to publish a diocesan notice in their bulletins saying the Church will “assist those who are divorced and remarried and cannot receive an annulment to utilize the internal forum of conscience in order to discern if God is calling them to return to the Eucharist.”

“The Synod proposed a spirituality of family life which is deeply inclusive,” and embraces “LBGT families,” the statement went on to say. “During the coming months Bishop McElroy will be working with a committee of synod delegates who will focus on the implementation of these goals.”

The statement, which multiple sources confirmed the bishop sent to priests of the diocese, has appeared in at least three San Diego parish bulletins and is one of the most liberal interpretations by a U.S. bishop of the pope's controversial exhortation Amoris Laetitia.

The “internal forum” is the process by which a “remarried” couple living in a state the Church considers adultery may “discern,” usually with the help of a priest, whether they may receive Holy Communion. This is at odds with the Church’s perennial teaching on sexual morality and the Sacraments, which stipulates that only the divorced and remarried who live abstinently as “brother and sister” may be admitted to the Sacraments.

The notion that couples who are in sexual relationships with individuals other than their valid spouse–adultery–may decide they are eligible to receive the Sacraments anyway has long been condemned by the Church, including by Pope St. John Paul II in his apostolic exhortation Familiaris Consortio. In the wake of Amoris Laetitia, it has again been condemned by numerous Church experts, including a renowned philosopher and close friend of Pope St. John Paul II as “completely inappropriate” and a potential “pastoral catastrophe.” Cardinals, bishops, theologians, and other prelates have raised questions about how Amoris Laetitia should be interpreted, reiterating that the “internal forum” could lead to sacrilege and scandal. The Catholic Church teaches that the Eucharist is the literal body, blood, soul, and divinity of Jesus Christ and therefore in principle only allows Catholics who have repented of and confessed serious sins (Catholics in a “state of grace”) to receive Holy Communion.

The Diocese of San Diego's full statement is below:

On the weekend of October 30-31, the diocese of San Diego held the first diocesan synod in the nation of the theme of marriage and family life outlined in Pope Francis' encyclical on The Joy of Love. A synod brings together representatives of the entire Catholic community in a diocese for dialogue, deliberation, prayer and decision making.

For our synod here in San Diego, every parish had a delegate, as well as the university communities, theological faculties and members of the diocesan pastoral staff. These delegates included priests, religious sisters, mothers, fathers, deacons, and young adults of every culture and language.

The deliberations at the synod pointed to the need for renewed dedication of married couples toward embracing the depth, permanence, sanctity and sacrifice which lie at the heart of the Catholic conception of marriage. The discussions emphasized the need to make a spirituality of marriage and family life more available to our parishioners, especially to young couples who often find it less automatic to bring prayer and the Gospel into their marriage and role as parents.

The Synod pointed to the need to invite young couples lovingly, non-judgmentally and energetically into Catholic marriage and to provide mentors for them. The delegates spoke movingly to the need for the Church to reach out to divorced men and women at every moment of their journey, to support them spiritually and pastorally, to help them move through the annulment process, and to assist those who are divorced and remarried and cannot receive an annulment to utilize the internal forum of conscience in order to discern if God is calling them to return to the Eucharist.

Finally, the Synod proposed a spirituality of family life which is deeply inclusive: embracing mothers and fathers beautifully bonded in their married love and the love of their children, as well as single parents, those who are widowed, our many military families where deployment brings great stress, LBGT families, families which deportation has split and families with members who have special needs. During the coming months Bishop McElroy will be working with a committee of synod delegates who will focus on the implementation of these goals. It is our hope that through this initiative the grace of married and family life will be profoundly deepened.

The synod recommended that in providing “authentic pastoral support for those who are divorced,” the diocese “provide formation in the areas of conscience formation and the Internal Forum, not only to implement the pathway to sacramental participation outlined in the Joy of Love but even more fundamentally to illuminate a core element of Christian discipleship itself.”

Of Holy Communion for the divorced and civilly remarried, Pope St. John Paul II wrote in his exhortation Familiaris Consortio:

Reconciliation in the sacrament of Penance which would open the way to the Eucharist, can only be granted to those who, repenting of having broken the sign of the Covenant and of fidelity to Christ, are sincerely ready to undertake a way of life that is no longer in contradiction to the indissolubility of marriage. This means, in practice, that when, for serious reasons, such as for example the children's upbringing, a man and a woman cannot satisfy the obligation to separate, they “take on themselves the duty to live in complete continence, that is, by abstinence from the acts proper to married couples.”

Footnote 351 of Amoris Laetitia has caused confusion about whether the pope is intending to allow divorced and “remarried” Catholics to receive Holy Communion. Different prelates, theologians, and philosophers have interpreted the exhortation in different ways. Four cardinals asked Pope Francis to clarify whether Amoris Laetitia is at odds with Catholic moral teaching, but he has yet to respond.

The use of the term “LGBT families” is unusual for a Catholic bishop, as the Catechism of the Catholic Church teaches, “A man and a woman united in marriage, together with their children, form a family” (CCC 2202) and family “is the natural society in which husband and wife are called to give themselves in love and in the gift of life” (CCC 2207).

The Catechism of the Catholic Church also teaches that sexual acts between members of the same sex are “intrinsically disordered,” “contrary to the natural law,” and “under no circumstances can they be approved” (CCC 2357).

The synod also recommended the creation of a diocesan office that will specialize in outreach to the “LGBT” population, that he hire a senior level marriage and family staffer whose sole job will be to focus “on all stages of separation and divorce,” and that the diocese provide “formation” on the “internal forum” that is referenced in Amoris Laetitia.

In interviews with local media, McElroy stressed, “Our notion of family is an inclusive notion” and individual “conscience” is the “real core of Catholic teaching.”

‘Internal forum’ to be incorporated into adult catechesis?

The proposed diocesan office for “family spirituality” would “develop resources for parishes to minister to families (i.e divorced, single-parent, widowed, deployed, deported, special needs, multigenerational households, LGBT),” according to the synod’s recommendations. This reconfiguration of the Marriage and Family Life office would “serve the separated, divorced, and remarried populations.”

In the synod report, there are no mentions of sin or the Church’s teaching that those with same-sex attractions are called to chastity. It make allusions to the Church’s teaching on the indissolubility of marriage in its suggestions that the diocese “provide education, based on canon law, on the annulment process and remarriage” and “provide guidance on the annulment process in collaboration with the Tribunal.”

In a National Catholic Reporter video, synod attendees praised the diocese’s “positive energy…around what it means renew our approach to marriage and family” and said McElroy is a “spiritual” man.