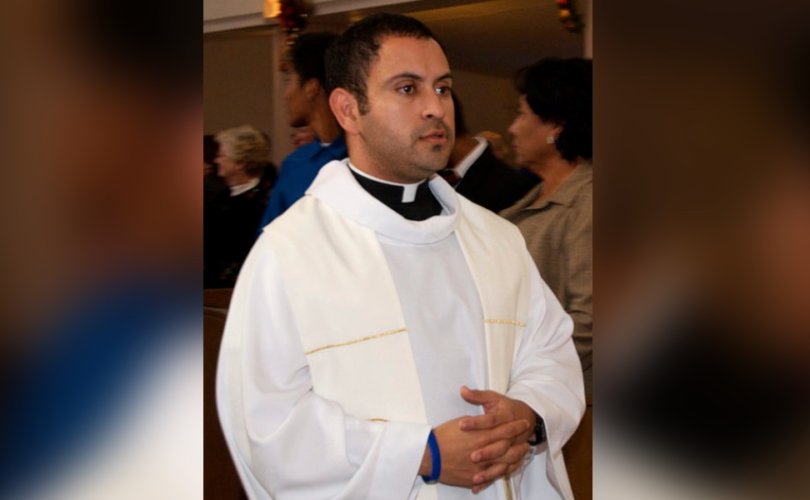 SAN DIEGO, California, September 20, 2018 (LifeSiteNews) — The Diocese of San Diego did not tell a parish their associate pastor was under police investigation for sexual battery when it removed him in February.

But diocesan spokesman Kevin Eckery defended the decision on grounds that the complainant was an adult over age 21 and that the diocese didn’t want to influence the criminal case, which, he says, will ultimately determine whether the incident was consensual.

Fr. Juan Garcia Castillo, 35, was charged May 14 of one count of the misdemeanor charge of sexual battery after he allegedly assaulted a seminarian following a parish event in February, Catholic News Agency’s J.D. Flynn reported Tuesday.

Eckery told LifeSiteNews the incident took place Saturday, February 4, at a restaurant, but would not confirm or deny if the alleged victim is a seminarian.

Sources told Flynn the alleged assault was immediately reported to the police and to the diocese, but that Castillo, a member of the Congregation of Jesus and Mary, also called the Eudist Fathers, was still listed as associate pastor at St. Patrick’s in Carlsbad in late March.

Eckery confirmed the diocese was informed of the incident the very day it occurred, and the next day it told Castillo he “was suspended and his faculties were removed and he was ordered to move out of the rectory.”

Castillo’s jury trial is scheduled for October 22, but he could make a plea bargain before then, said Tanya Sierra, spokesperson for the San Diego attorney general’s office.

The official complaint against Castillo charges that on February 4, the priest “did willfully and unlawfully touch an intimate part of another person, to wit: Another, against the will of the other person, and for the specific purpose of sexual arousal, sexual gratification and sexual abuse.”

Castillo is forbidden by a protective order from contact with the victim, CNA reported.

A California priest has been charged with sexual battery; his victim was a San Diego seminarian. Until @cnalive contacted them, the San Diego diocese did not disclose to parishioners why the priest was removed from ministry.https://t.co/W5z15pxU7q

Eckery told LifeSiteNews it was announced at all Masses at St. Patrick’s the weekend following the incident “that Fr. Castillo was on a leave of absence.”

It was “handled this way to prevent any interference with a police investigation,” he said. “An announcement will be made again this weekend at all Masses at St. Patrick’s.”

He made the distinction between a criminal charge and the canonical matter of a violation of vows, and between allegations regarding an adult as opposed to a minor.

Had the allegations involved a minor, the parish would have been informed immediately, because “there is no issue of, can a minor give consent? The answer is no, so there is no grey,” Eckery told LifeSiteNews.

“Can an adult give consent? Yes, but was there abuse of authority involved? I don’t know. [Were] there improper advances? I don’t know, but the simple fact is that there can be consent, separate from whether or not someone is loyal to their vows,” he said.

“We need to see what happens to the criminal case because the issue of consent is so important and if it’s not clear, we wait for that to get made clear,” Eckery told CNA’s Flynn.

The official complaint against Castillo says the alleged sexual contact was “against the will of the other person.”

The Honduras-born Castillo was ordained to the priesthood in 2011 at St. Patrick’s by Cardinal Oscar Maradiaga of Tegucigalpa, according to Flynn.

Multiple sources told Flynn that Castillo recently looked into the possibility of serving as a priest in at least one other U.S. diocese, he reported.

“If true, this would be something Fr. Castillo initiated on his own, not with the knowledge or assistance of his order or the Diocese of San Diego,” Eckery told LifeSiteNews.

The diocese does not provide legal defense for criminal charges, and Castillo has retained his own lawyer and remains with his Eudist order, he said.

Up to September 17, Castillo was listed on the Eudists’ website as “Local Superior of the San Diego Community of the CJM” and “working with Eudist seminarians on a family-formation program for the Spanish speaking community,” CNA’s Flynn reported.

Eudist superior Fr. John Howard did not return a request for comment from LifeSiteNews.

As well as serving in the Diocese of San Diego and the Archdiocese of Los Angeles, the Eudists are in France, Canada, the Philippines, and a number of South and Latin American countries, according to Flynn.

The bishop of San Diego, Robert McElroy, released an August 27 statement responding to sex abuse scandals in the Church, writing: “We must develop new, lay-governed instruments of oversight and investigation in every element of how we confront sexual abuse by clergy at all levels in the life of the Church.”

Added the bishop: “And we must reject all attempts to subordinate these goals to ideological or personal projects. For if we do not, we will have betrayed the victims of abuse once again.”

McElroy is a known liberal and staunch defender of pro-LGBT activist Fr. James Martin. Viganò alleged in his explosive August testimony that McElroy owes his rise to the influence of now-disgraced serial sex abuser ex-Cardinal Theodore McCarrick, infamous for inviting seminarians into his bed, and that “McElroy was also well aware of McCarrick’s abuses.”

Eckery told CNA the diocese didn’t know yet if it will pursue any disciplinary action against Castillo.

“We’ll be waiting to see the outcome of the criminal case. At that point, we’ll be informed and we’ll know what the next steps are,” he said.

On September 19, a San Diego NBC affiliate reported that the Diocese of San Diego continued writing recommendations for a Father J. Patrick Foley after he was accused of sexually abusing two minors.