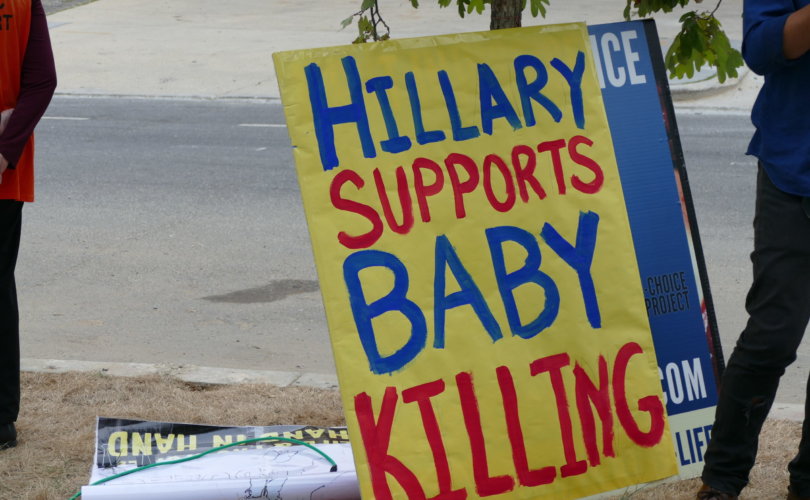 SAN DIEGO, California, November 4, 2016 (LifeSiteNews) – The Diocese of San Diego has publicly distanced itself from a controversial insert that appeared in a Catholic church’s bulletin highlighting Church teaching on voting for politicians who champion intrinsic evils.

According to local media reports, Immaculate Conception Catholic Church’s October 16 bulletin had stuffed inside it a flier in English and Spanish highlighting the Church’s opposition to the five moral issues that under no circumstances may Catholics support: abortion, same-sex “marriage,” euthanasia, human cloning, and embryonic stem cell research.

The fliers pointed out the Democratic Party’s official support for such intrinsic evils and warned Catholics they put their souls at risk by voting for Democrats.

The fliers have generated national media coverage because they state: “It is a mortal sin to vote Democrat.”

Father Frank Pavone, national director of Priests for Life, told LifeSiteNews that the reported phrasing of the newsletter did lack clarity, and pointed out that it's not intrinsically sinful to vote for Democrats. Although increasingly rare there are and have been some pro-life and pro-family Democratic politicians who have defied the party platform. But Pavone added that in the current situation “it would be very hard” to vote Democrat without committing a sin.

The Democratic Party platform supports taxpayer-funded abortion throughout all nine months of pregnancy abroad and in the U.S., same-sex “marriage,” and the abortion giant Planned Parenthood. It is also supportive of transgenderism and condom-based sex education.

Kevin Eckery, a spokesman for the Diocese of San Diego, said, “It’s not a mortal sin to vote for Democrats, number one. And number two, the church doesn’t take positions on this, and we’re not going to.”

“For all I know someone thought that they were doing a service,” by providing this information to parishioners, Eckery continued. “The pastor said it was not something he had reviewed or approved.”

After the bulletin incident, San Diego Bishop Robert McElroy criticized the parish bulletin in a speech. “I speak to you tonight as a bishop who is part of a long tradition in Catholic episcopal leadership in the United States which holds that both the Church and society are best served when bishops refrain from publicly endorsing or favoring, either directly or indirectly, specific candidates in partisan elections,” he said.

McElroy said in another statement, “Let me stress again that while we have a moral role to play in explaining how Catholic teaching relates to certain public policy issues, we must not and will not endorse specific candidates, use parish media or bulletins to favor candidates or parties through veiled language about selectively chosen issues, or engage in partisan political activity of any kind.”

In his interview with LifeSiteNews, Father Pavone defended the parish's intention with the voter's guide.

“First of all, we have to take a few steps back and help people understand that there's a difference between saying if somebody committed a sin and the action that they took was seriously evil,” he said. “Because whether they actually incur a sin depends on how much knowledge and freedom they have aside from the action.”

“What people who create fliers like that are trying to say is hey, the time for neutrality is over,” he explained. “The Democratic party is openly, explicitly embracing evil…and if the Church doesn’t say that, well for goodness sake, what kind of moral teachers have we become?”

“Definitely, it could be done more clearly,” he said of the voter guide, adding that the problem could be avoided the dioceses themselves produced clearer and faithful voter guides. “We have to ask the deeper question: why do these voter guides like this arise in the first place by people who might not have the theological nuances we’re trying to make now? Maybe it’s because they’re filling a vacuum. Are they filling a vacuum? What is coming from the diocese?”

Father Stephen Imbarrato, an associate with Priests for Life, also told LifeSiteNews in an email that voting for a Democrat “in and of itself is not a mortal sin.”

“Indeed the Democrat could break with his party on the many issues of the Democrat party that are in opposition to our Catholic faith. However such a Democrat these days is very rare,” the priest said.

“For the most part, contemporary Church social teaching on voting  is concerned with issues and individual political candidates,” he told LifeSiteNews via email. “Even if it is the case that one party consistently advocates positions that we believe are intrinsically evil and non-negotiable, there is no generalized condemnation of that party that would bind Catholic voters.”

Petri said Catholics should consider “the principle enunciated by then-Cardinal Joseph Ratzinger in his 2004 letter to the American bishops, which was adopted by the bishops in their important document Forming Consciences for Faithful Citizenship.”

“Cardinal Ratzinger’s letter concerned this very issue about voting and the reception of Holy Communion,” said Petri. “At the very end of his letter he noted the following, 'A Catholic would be guilty of formal cooperation in evil, and so unworthy to present himself for Holy Communion, if he were to deliberately vote for a candidate precisely because of the candidate’s permissive stand on abortion and/or euthanasia. When a Catholic does not share a candidate’s stand in favor of abortion and/or euthanasia, but votes for that candidate for other reasons, it is considered remote material cooperation, which can be permitted in the presence of proportionate reasons.' This same principle now appears in paragraph 35 of Forming Consciences for Faithful Citizenship.”

“Voting is a moral choice and we are not permitted to take it lightly,” he wrote. “So a person voting for a Democrat or Republican can not simply vote out of fidelity to that party. Rather, a person must, in good conscience, identify the good reasons he or she is voting for a particular candidate, and even more so when voting for a candidate who supports intrinsically evil policies. Indeed, a voter’s reasons must then be serious, proportionate, and grave.”

Bishop McElroy has not been silent about how he thinks Catholics should vote in the 2016 elections. In his “comprehensive” voting advice, McElroy wrote that environmentalism is on par with abortion and that intrinsic evils are not a sufficient “moral roadmap for prioritizing the elements of the common good for voting.”

McElroy has been campaigning against the death penalty, which California voters are slated to vote on.

Despite the confusing signals coming from the Diocese of San Diego, on October 30, Immaculate Conception published a column in its bulletin affirming the Church’s moral teachings on intrinsic evils.

“The sins to which our American society are enslaved today have come from our elected officials, appointed judges, and Catholics who have voted for them and supported them,” it said. “These officials are unyielding in their imposition of sin upon us.”

Among the slavery imposed upon us is killing the unborn child in the womb, abortion, even with monies from our taxes. Another is the threat of punishment for rejecting homosexuality in all its forms: in its teaching in the schools, in ‘so called same sex marriage’ with fines resulting in loss in business, income, and employment. A third enslavement is using embryos which have a soul as experiments. A fourth is cloning wherein now scientists are experimenting with human and animal DNA to create hybrid creatures. A fifth is euthanasia, the direct killing of human beings either with or without their consent. A sixth is the silencing of the Christian to express his faith in public, wherein our churches are complicit for fear of losing their tax exempt status.

The column went on to decry immigrants who seek to “eradicate every belief except those of their own prophet and god, and to impose this on America,” expansions of government, and the slow removal of the right to self-defense.

The Catholic Church teaches that Catholics may disagree in matters of prudence on social problems like poverty, immigration, and taxes.

The column also noted that Hillary Clinton has said that “religious beliefs” against abortion “have to be changed.” It described how Christians have become desensitized to evil because it is so prevalent in modern society and how those opposed to Christianity silence anyone who disagrees with them.

Another problem is “conversion away from the classic Catholic terminology, theology, truth to an ambiguous language and different practice that permits sin alongside the goodness of Jesus,” the column explained.

We see this conversion in our clergy who, instead of building up the faith of the Christians, despise us, call us names, or to jam us, or create things that don’t exist such as islamophobia and islamophobes, homophobia and homophobes. We are called by some bishops rosary counters, hiding behind Christian doctrine, pickled pepper-faced Christians, little monsters, fundamentalists, anesthetized Christians, among many other insults. We are called by politicians such as Hillary Clinton, deplorables.

In every election, a Catholic must choose an elector who promotes that Catholic’s beliefs, and rejecting one who is opposed to Jesus and his religious teachings. In 2004 Cardinal Ratzinger as prefect for the Congregation for the Doctrine of the Faith wrote to Cardinal McCarrick,

[N.B. A Catholic would be guilty of formal cooperation in evil, and so unworthy to present himself for Holy Communion, if he were to deliberately vote for a candidate precisely because of the candidate’s permissive stand on abortion and/or euthanasia. When a Catholic does not share a candidate’s stand in favor of abortion and/or euthanasia, but votes for that candidate for other reasons, it is considered remote material cooperation, which can be permitted in the presence of proportionate reasons.]

Jesus Christ is the only answer along with faith in Him. When you vote, regardless of your affinity or dislike for the personality of the candidate, vote Catholic to save your soul and to promote faith in Jesus and eternal life. Protect the most vulnerable: the unborn, the terminally ill, religious freedom. Reject the sin that the governments have imposed on us. Know the candidate’s position on these things and what types of judges they will impose upon us.

Pray for all the candidates. Vote for the one who most closely reflects Catholic truth.