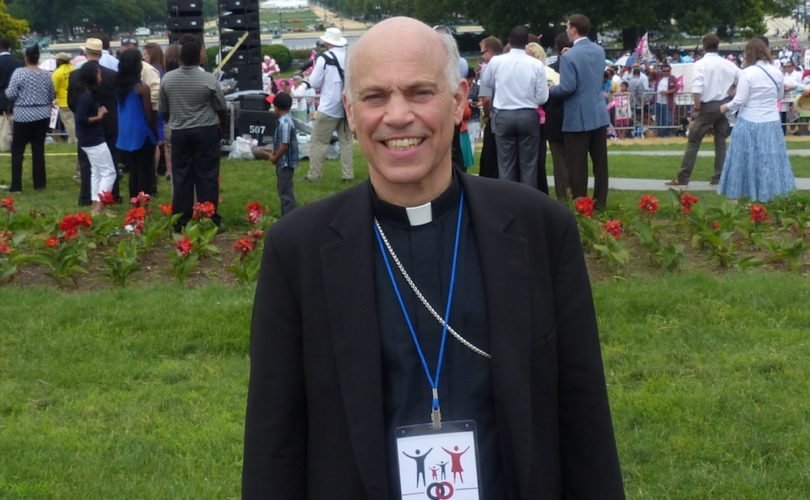 The Catholic Church’s work to promote and defend marriage is necessary, and marriage redefinition presents a tangible threat to religious liberty and freedom of conscience, according to the head of the US Bishops’ committee charged with upholding marriage.

San Francisco Archbishop Salvatore J. Cordileone told the fall General Assembly of the United States Conference of Catholic Bishops (USCCB) that the Church’s defense and promotion of marriage is a necessary part of encouraging families to “take up their mission of proclaiming the Gospel and making the Kingdom of God more manifest in our world.”

The archbishop gave a catechetical outreach update on USCCB efforts to support marriage, along with an up-to-date rundown on the legal climate, with a specific look at the challenges to religious liberty, and he offered thoughts on the future, factoring in the teaching of Pope Francis.

“The challenges to religious liberty with regard to the redefinition of marriage grow daily,” he said.

Starting on a positive note, he noted that the U.S. Sixth Circuit Court of Appeals had upheld marriage laws in Michigan, Ohio, Kentucky and Tennessee just days before, calling it “a significant win for marriage.”

Two other federal court rulings in Louisiana and Puerto Rico which had upheld marriage were on appeal.

A recent significant loss occurred when the U.S. Supreme Court had declined petitions to review cases coming from three U.S. Courts of Appeal. The USCCB had joined with Christian and other organizations to file an amicus brief asking the court to hear a case in Utah.

“This joint failing reflects our religiously diverse efforts to promote and defend marriage,” the archbishop said. “By declining to review the Utah case and the other marriage cases before it, the Supreme Court effectively let stand the decisions by the Courts of Appeal redefining marriage in five states.”

Marriage redefinition is now law in those states, he said, negatively impacting the other states in the jurisdictions of appeals courts.

Archbishop Cordileone said the Supreme Court’s action was unexpected, and in its aftermath the U.S. Ninth Circuit Court came down with a ruling redefining marriage in two states, with that negative impact expected to be felt throughout that Circuit.

“With the Supreme Court’s action coupled with the Ninth Circuit’s decision, the number of states where marriage has effectively been redefined in the law is now 32,” he said.

Archbishop Cordileone said it was important to note however, that the U.S. Supreme Court has not ruled on the question of whether a state may constitutionally define marriage as the union between one man and one woman.

“As two recent high profile incidents demonstrate, the threat to religious liberty and freedom of conscience posed by marriage redefinition and by a government-mandated view of human sexuality is now very real even in the more extreme circumstances,” he said, citing the recent cases of the Christian Idaho ministers who were threatened with fines and jail if they refused to perform homosexual “marriage ceremonies,” and the case of the City of Houston, TX subpoenaing the sermons of pastors who opposed homosexual “marriage.”

“Again, these examples are more extreme,” Archbishop Cordileone said. “But they are instructive because they show the lengths to which some are willing to go, including legal coercion to silence and potential criminal penalties, as these recent examples illustrate.”

Looking forward, Archbishop Cordileone said Pope Francis encouraged the faithful to not shy away from challenges, but to address them with renewed confidence in the Gospel. The pope’s call for a “culture of encounter” is one where no one’s inviolable dignity is ignored or rejected, he said, and where the most vulnerable, especially children and the poor, are welcomed and cared for.

“In promoting and defending marriage,” Archbishop Cordileone told the bishops at the conference, “we need to show the connection between strengthening marriage gap between the poor and the wealthy.”

“As St. John Paul taught in Familiaris Consortio and as our Holy Father Pope Francis has reiterated, it is important for us to advance a culture of accompaniment,” said Archbishop Cordileone. “Pope Francis said recently, ‘There is a crisis in the family because it’s beat(en) up from all sides and left very wounded!’”

“We must help pick it up,” the archbishop continued, “like the Good Samaritan, and care for it.”

Accompaniment of those who experience same-sex attraction is particularly important, he said.

“The call to chastity which is addressed to every person in every state of life is a call to freedom,” said Archbishop Cordileone. “We must encourage and walk with others living out this call, which is a great ‘yes!’”

He said that the recent Extraordinary Synod on the Family and its follow-up next October, and the upcoming World Meeting of Families in Philadelphia, were both pivotal with the issue of marriage.

New San Fran archbishop required Catholic homosexual group to sign oath of fidelity
Abp. Cordileone on gay ‘marriage’: ‘How can we do this to our children?’
New Oakland California Bishop Cordileone Speaks out Strongly on Right to Life in Inaugural Homily