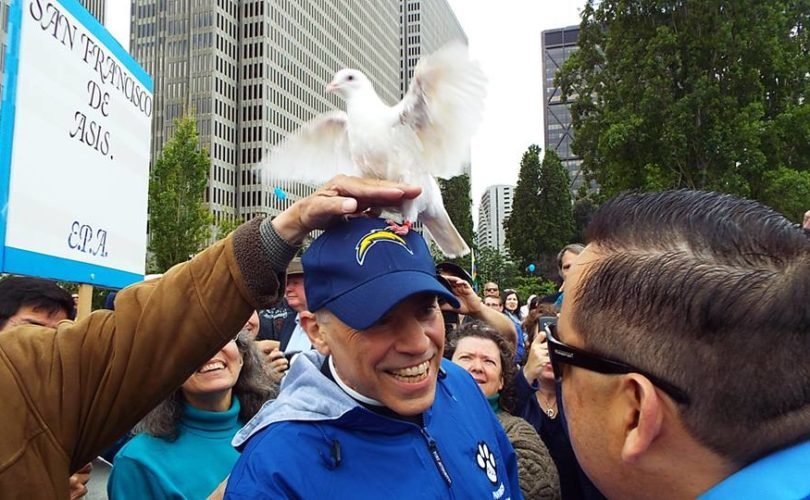 Inviting faculty to be part of the process, and also taking responsibility for previously upsetting some people, the archbishop said he needed another method to achieve the goal of definitively proclaiming Catholic identity for the sake of young people attending archdiocesan high schools, and on June 1 he released a revised version of proposed handbook language.

“This rewrite has been well received by a large number of faculty teaching in the Archdiocesan high schools,” Archdiocese of San Francisco Vicar for Administration Father John Piderit told LifeSiteNews.

The proposed language has been one part of the controversy in San Francisco over the last several months stemming from some residents upset over the archbishop’s effort to reinforce Catholic identity and principles in archdiocesan high schools.

“The archbishop decided to change the addendum language because he acknowledged that the original language was written in a short-hand form, intended for those familiar with the teachings expressed in the Catechism of the Catholic Church,” Father Piderit told LifeSiteNews. “For people not familiar with Catholic dogma or theology or the structure of the Catechism, the language appeared insensitive.”

Father Piderit maintained that while taking a more pastoral tone, the new documents do not compromise on Catholic teaching. “None of the doctrines were watered down in the new version of the Addendum,” he told LifeSiteNews. “It is still the teaching of the Catholic Church.”

The original proposed additions to the handbook, along with suggested new teacher contract clauses with the same goal, were announced February 3, sparking backlash from some local Catholics and others.

Various groups called the changes divisive and discriminatory, and out of step with Pope Francis’ pontificate, and launched an ongoing PR offensive against the archbishop.

While a new draft document for the handbook language has been released, teacher contract negotiations are still in progress, Father Piderit said, and are nearing an end. Some found the terms “minister” and “ministry” that had originally been part of the proposed new contract clauses upsetting, and they are now not part of the suggested contract language.

“Clearly, the Archbishop feels that one can express well the central core of a Catholic school without having to use these words,” said Father Piderit.

According to what others have communicated to him, Archbishop Cordileone explained in a letter to teachers on the new revised handbook language, the problem critics had was not with Catholic teaching itself nor his job as archbishop to impart that teaching. Rather, it’s been with his methods.

“Over the course of these last few weeks I have been in conversations with different groups and individuals to seek a solution that will move us forward,” Archbishop Cordileone said. “In all of the discussions I have had, I have been told consistently that the issue is not Church teaching nor my role and responsibility in teaching the faith in our local church, but rather the way I went about doing this. This tells me that we need to find another approach to reach the same goal.”

The goal the archbishop referred to was countering the pressures put upon San Francisco Catholic high school students by today’s culture, requiring a strengthened Catholic identity at the schools.

“This project is all the more pressing in the culture in which we are now living which, as we know, is marked by rapid changes in all areas of human life,” said Archbishop Cordileone. “Our young people are particularly vulnerable to the challenges and stresses these changes have created. It was for this reason that I proposed adding language to the faculty handbook to proclaim clearly areas of Catholic identity in light of the culture in which we now live.”

He offered an apology for the resulting unintentional conflict with the June 1 release of the handbook language redraft.

“Despite these worthy goals, several unintended consequences have resulted that have created the tensions we have been experiencing,” the archbishop said. “I honestly did not foresee the reaction that ensued, and I apologize for this lack of foresight on my part.”

The handbook language rewrite was the work of a committee formed by the archbishop consisting of theology teachers from the four high schools overseen by the archdiocese, and it uses a more pastoral tone, the archbishop’s letter said.

Archbishop Cordileone was very satisfied with the work of the committee, Father Piderit said.

“He is now convinced that the language and tone are good,” he told LifeSiteNews. “Therefore, earlier complaints about improper tone, style, or language have been rendered moot.”

In addition to a more pastoral tone, the new language also gives a more comprehensive view of Church teaching than the initial focus on sexual morality. Another goal with the document, the archbishop said, will be to give teachers a more profound understanding of Church doctrine.

“I have also begun discussions on finding ways to offer you, our teachers, opportunities to understand more deeply the truths the Church teaches, to help you better understand the ‘what’ and, especially, the ‘why’ of the full range of Church teaching,” Archbishop Cordileone said. “The document which is eventually finalized could possibly serve as a basis for how this will be done.”

Originally set to go into effect with the coming school year, work on the new proposed handbook language will instead extend into the school year, with an emphasis made on taking ample time and giving teachers the opportunity to study it and give feedback.

“Before moving forward in implementing it, we will take some time (into the next school year) to allow you to reflect upon it, discuss it, and give some reaction to it,” the archbishop told teachers. “I have initiated a discussion with your presidents and principals on how best to go about this, and will continue to work with them on it. Once we have had sufficient time to ponder, study and refine the document, it will then be implemented.”

“Faculty will have time to review the text in the coming months,” Father Piderit confirmed for LifeSiteNews. “Small changes in the language are possible, but the substance, which is in accordance with the Catechism of the Catholic Church, will remain the same.”