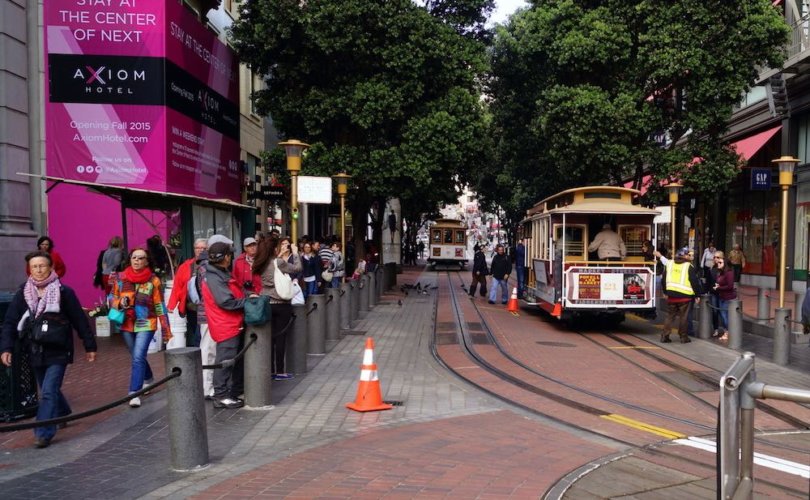 SAN FRANCISCO, December 13, 2018 (LifeSiteNews) – The far-left California city of San Francisco is making history by establishing a cultural district specifically for gender-confused residents, which is said to be the first of its kind in the world.

Compton's Transgender Cultural District spans six blocks from the southeastern Tenderloin, past Market Street, to two blocks of 6th street, according to the district’s Facebook page.

Named after a 1966 riot at Gene’s Compton Cafeteria, the district is billed as a “safe, welcoming and empowering neighborhood lead by trans people for trans people,” a “hub of services and economic opportunities for trans and gender-nonconforming communities,” and a “place to honor the community’s history.”

“The lower Tenderloin is the most important neighborhood in America for transgender history, culture, and civil rights,” San Francisco Supervisor Jane Kim said. “By creating the Compton’s TLGB District we are honoring this vibrant community built by transgender people, and are sending a message to the world that trans people are welcome here.”

Kim first introduced legislation authorizing the district in 2017, The Daily Beast reports. A developer agreed to pay $300,000 to establish the district, including a community center housed at the site of a former homosexual bathhouse. The board unanimously approved funding for San Francisco’s cultural districts in May, including $215,000 for Compton’s. Aria Sa’id, LGBT policy adviser for the San Francisco Human Rights Commission, was involved in the project as well.

Organizers say the area is fitting as a cultural district for its history both as a refuge of sorts and as a site of LGBT-related conflict.

“Many of our traditions are passed down through queer bars because those are the places where our elders interact with younger generations,” said Honey Mahogany, Compton’s district manager and a drag queen who has competed on RuPaul’s Drag Race. “Drag is often seen as a way of storytelling and passing on stories of previous generations.”

Area trans activist Donna Personna told the Beast that the district also serves as an “act of resistance and of fighting back” against President Donald Trump, “something tangible against the Trump administration.”

“Now we have Trump and his intention to further marginalize trans people and Muslims and anyone who’s not a straight white man. But progress is not linear,” Sa’id agreed. “Just saying the word ‘transgender,’ he’s empowering us. We’re seeing solidarity from people who didn’t know what trans was five or 10 years ago. He’s encouraging people to come together and do the opposite of what he wants.”

In fact, Trump has a mixed record on LGBT issues. He has taken several steps to protect religious liberty and privacy rights, wants to bar people with gender confusion from military service, and provoked left-wing ire this fall with a leaked memo indicating a return to a strictly-biological definition of sex for federal rules. But he has also declared same-sex “marriage” a “settled” issue, and appointed a number of homosexual activists to federal vacancies.

The pro-LGBT media’s fawning coverage of the new district has overlooked some unseemly details, the Daily Caller reports. The Tenderloin is considered one of San Francisco’s most dangerous districts and most notorious drug districts.

“Drug dealers who sell hundreds of $10 bindles of cocaine, Fentanyl and heroin on Tenderloin and South of Market street corners while rolling in and out of jail” have become “as much a part of the city’s streetscape as the homeless,” the San Francisco Chronicle reported Monday.

For years, San Francisco has even struggled to crack down on unusually high amounts of public defecation, with Vice calling the Tenderloin the “hardest hit area” in June.