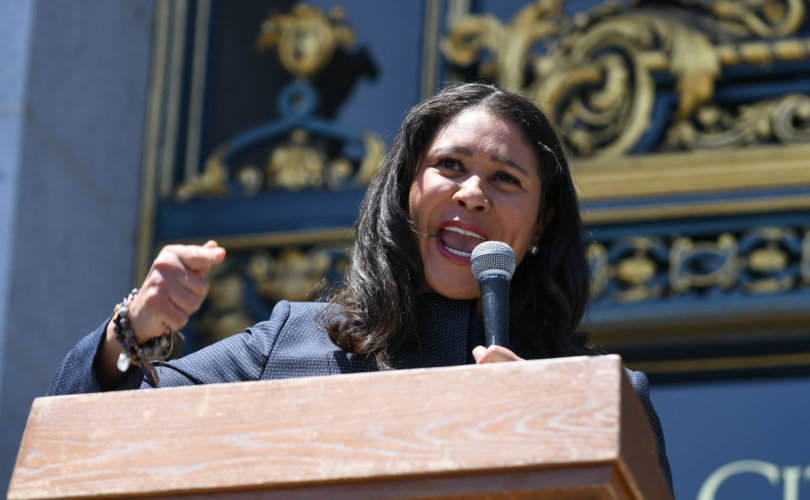 SAN FRANCISCO, California, September 30, 2020 (LifeSiteNews) – Mayor London N. Breed is allowing Christians in San Francisco to go to church again and attend indoor worship services after imposing some of the most restrictive coronavirus lockdowns in March.

Starting today, according to a press release from the mayor’s office, “places of worship can open indoors at 25 percent capacity, up to 100 people. Outdoor worship services will continue, now with up to 200 people, as long as there is sufficient space to allow for social distancing.”

Nevertheless, neither singing nor chanting is allowed indoors “since choirs and singing indoors is a known source of COVID-19 spread. The place of worship must conduct a health check of patrons before they enter the facility.” The mayor’s office didn’t specify what a health check entails.

“Face coverings are required at all times except for brief removal to consume food or drink if it is essential to a ritual or ceremony,” the press release continued.

Prior to the new guidelines, outdoor religious gatherings were limited to 50 people. Inside of church buildings, only a single faithful was allowed to represent the congregation.

A government website dedicated to reopening churches and linked to by the mayor’s office’s press release appears to be only partially updated. It still mentions a limit of 50 people outdoors and doesn’t appear to allow for Holy Communion or any ceremony involving food and drink.

Archbishop Salvatore Cordileone, the highest-ranking Catholic in San Francisco, had launched a petition earlier this year to ask the mayor to remove the severe restrictions placed on Christians.

“I am grateful that the Mayor and other government leaders in San Francisco acknowledge the importance of mental and spiritual health to the overall well-being of our people, in addition to physical and economic health,” the archbishop began, before making his demands.

“I am therefore calling on the Mayor and her public health officials to, at a minimum, remove the excessive limits on outdoor public worship.”

“Particularly for us as Catholics, attending the Mass and receiving the Body and Blood of Christ in person is the source and the summit of our faith, and we have shown we can celebrate the Mass safely,” he emphasized.

Cordileone referred to the judgment of several “major infectious disease specialists” who “pointed out, ‘over one million public (M)asses have been celebrated following guidelines to prevent the spread of the virus … for Catholic churches following these guidelines, no outbreaks of COVID-19 have been linked to church attendance.’”

The archbishop accused the mayor of treating the Catholic faith, and any other faith, “as less important than a trip to the hardware store, or a nice dinner out on the patio. This denial of access to safe outdoor public worship is a serious deprivation of our rights as Americans under the First Amendment and our spiritual needs as people of faith.”

The petition was eventually signed by more than 35,000 people.

Yesterday, Archbishop Cordileone posted a short video welcoming the news of easier access to religious gatherings for those living in his archdiocese.

It gives me great pleasure to take this opportunity to thank all of you who signed the petition to free the Mass, to make your voices heard as one about the importance of faith,” he said. “That faith is essential. God is essential, and so is (being) there for the worship of God.”

Cordileone expressed his happiness that the petition “has now born fruit in that in San Francisco we can now return to indoor worship in accordance with the guidelines by the state of California.” He added that he and his archdiocese “will continue to work to make sure that our right to worship is respected in equality with other similar secular activities.”

In a separate statement, the archbishop added, “The state of California’s limit of no more than 100 people inside of a house of worship regardless of the size of the building is still unjust. We want and we intend to worship God safely: with masks, social distancing, sanitation, ventilation, and other such safety protocols. But we will not accept believers being treated more severely than other, comparable secular activities.”

Just last Friday, the U.S. Department of Justice sent a letter to Breed, explaining that “the limitation of indoor worship to one congregant without regard to the size of the place of worship is draconian, out of step with the treatment afforded other similar indoor activities in San Francisco, wholly at odds with this nation’s traditional understanding of religious liberty, and may violate the First Amendment to the Constitution.”

In contrast to places like gyms, where the number of people able to be present “is generally expressed as a percentage of a facility’s capacity, places of worship are limited to one person regardless of the size of the facility and even though there is typically less contact between the clergy and the congregant than at the other more-favored establishments and plenty of room for six feet or greater separation.”

As an example, the letter signed by Assistant Attorney General for the Civil Rights Division Eric S. Dreiband and U.S. Attorney for the Northern District of California mentioned that “some of the city’s most spacious buildings for religious services including Temple Sherith Israel, with the capacity for 1,400 people, and the Cathedral of Saint Mary of the Assumption, with the capacity for 2,400 people, are limited to a vanishing fraction of their capacity.”

At the end of June, the city and county of San Francisco had threatened the local archdiocese with a temporary restraining order over its alleged noncompliance with coronavirus-related orders by Health Officer Tomás J. Aragón.

Fr. Joseph Illo, a priest in San Francisco, at the time commented on his blog, “Clearly some people in the city government and the news media find religion intolerable. They hate religion.”