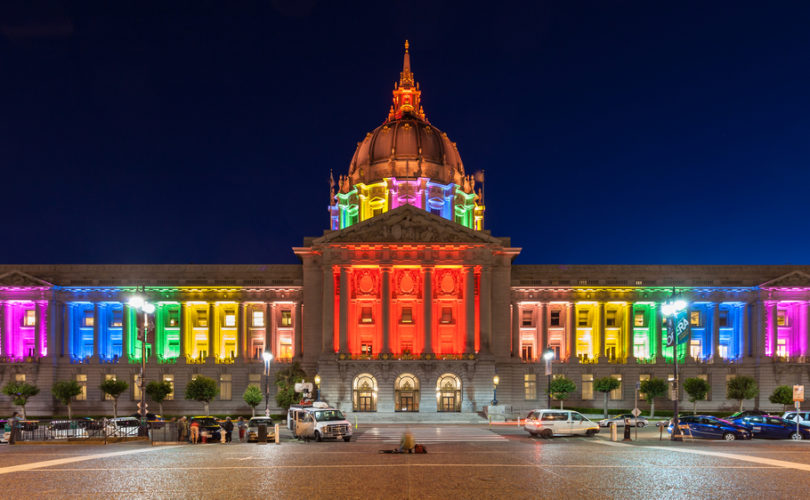 SAN FRANCISCO, CA — The 2014 Pride Parade in San Francisco has sparked some controversy after deciding to block the National Guard from having an exhibit.

Parade organizers announced last week that the National Guard is not welcome at the 2014 Pride Parade in San Francisco because the military does not allow openly transgendered people to serve.

“The decision to bar the National Guard … illustrates the futility of trying to appease the radicals of the left.”

After Don't Ask, Don't Tell was lifted, the National Guard had an exhibit at the 2013 Pride Parade. This year, organizers of the 44th Annual San Francisco Lesbian, Gay, Bisexual Transgender Pride Parade and Celebration say that the National Guard’s lack of transgender “inclusion” was a major factor in deciding to not allow their exhibit.

Other reasons included what organizers considered inadequate responses to sexual assaults in the military, as well as a lack of recruitment in minority neighborhoods.

The Family Research Council's Peter Sprigg told LifeSiteNews that “the decision to bar the National Guard from the San Francisco LGBT Pride Celebration illustrates the futility of trying to appease the radicals of the left—which is what the Obama administration and Congress attempted when they repealed the 1993 law against homosexuality in the military.”

San Francisco has in the past invoked a pro-homosexual position to oppose the military. The city's Board voted in 2005 to not allow a World War II battleship to serve as a museum, partially based upon the Don't Ask, Don't Tell policy, which was still in effect at the time.

According to Lieutenant Colonel Darrin Bender, who is with the California Military Department (CMD), the CMD “chooses to attend Pride events” for multiple reasons. The CMD consists of the National Guard and the State Military Reserve (SMR).

The first reason, he said, is “to reach out and inform members of the LGBT community about the California National Guard and the California State Military Reserve (SMR) to benefit our recruiting efforts.”

Bender told LifeSiteNews that “these venues are more effective for engagement and providing information about the Guard and SMR to a large number of people.”

Bender said that the effort to be at Pride events is also meant “to demonstrate to the Soldiers and Airmen within the California Military Department that the leadership of the Department supports the integration of members of the LGBT community into the ranks.”

In addressing the Pride Parade's Board of Directors' decision to ban military exhibits, Bender said that the ban was “primarily due to the Department of Defense policy prohibiting transgender men and women from serving openly.” However, he noted that the CMD “is not affiliated with the Department of Defense or subject to federal law and policy,” and yet was also banned from appearing.

“The [California State Military Reserve] allows openly transgender men and women to serve in uniform,” said Bender. “Therefore, I believe that the decision by the SF Pride Board to ban the SMR is hypocritical and demonstrates an anti-military bias.”

Sprigg said that while the repeal of Don’t Ask, Don’t Tell he “was supposed to affect no one but homosexuals who wanted to serve their country, it has already been used for 'Pride Celebrations' on military bases around the country, promoting a political and social agenda that is offensive to most servicemembers.”

“Activists in San Francisco are trying to enlist the military in yet more social engineering” by forcing military acceptance of transgendered people, said Sprigg. “Perhaps we should not be surprised that creating an effective national defense is not a high priority for this group. After all, it is the same group that wants to honor the most famous transgender soldier—Bradley Manning, who betrayed his country by leaking massive amounts of classified material.”

Organizers of the Pride Parade did not return a request for comment.