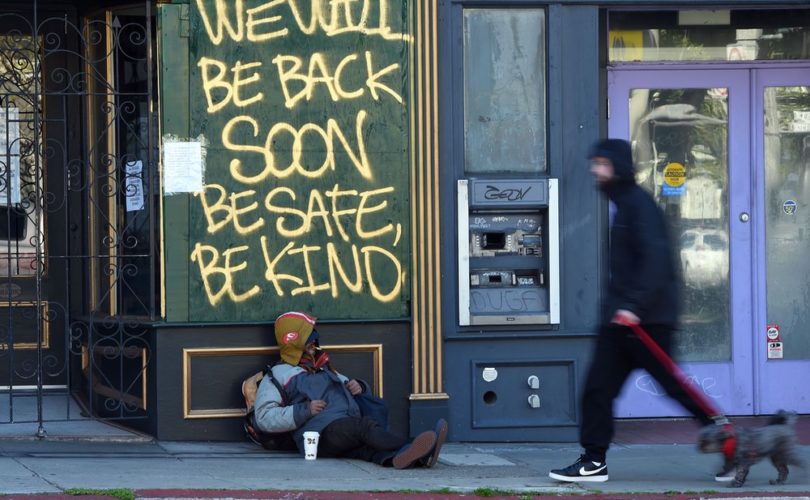 A man walks his dog past a homeless man sleeping under a message painted on a boarded up shop in San Francisco, California on April, 1, 2020, during the coronavirus outbreak.JOSH EDELSON / AFP via Getty Images

SAN FRANCISCO (LifeSiteNews) – Amid long-unaddressed troubles with crime, drugs, and homelessness, San Francisco city leaders are doubling down on their true passions with a guaranteed-income program for low-income transgender residents.

KTUV reports that Democrat Mayor London Breed announced that the Guaranteed Income for Trans People (GIFT) Program, one of several such programs doling out money to various identity groups, will give 55 gender-confused individuals who apply before December 15 up to $1,200 per month for 18 months, as well as “gender-affirming” medical treatment and therapy, case management, specialty care services, and financial coaching.

“Our Guaranteed Income Programs allow us to help our residents when they need it most as part of our City’s economic recovery and our commitment to creating a more just city for all,” Breed said. “We know that our trans communities experience much higher rates of poverty and discrimination, so this program will target support to lift individuals in this community up.”

The program’s application form offers 97 gender options, and more than a dozen sets of pronouns:

These are all the pronoun options for this new government program. pic.twitter.com/HIpw01O1Jp

The news was met with widespread mockery online, with respondents suggesting the program could incentivize troubled people to “transition,” that it could be exploited by people falsely claiming to be trans for free money, and that it was a sign of city officials being more interested in left-wing identity politics than solving San Francisco’s myriad woes.

I would sign up for that even though I’m not

That's what it's for. Government knows that you get more of what you pay for. It's what guides their every destructive move.

Trans Can Now Also Walk Through Poop On The Sidewalk Bravo https://t.co/BPPVXG5Hvq

With the thousands of problems in SF, @LondonBreed tackles this. Meanwhile, it’s open season on photographers at POFA and other scenic locations, and war against tourists with luggage.

I… don't even know what to say on this one lmao it's beyond parody. If you asked me to think of a stereotypical "how tf do we get our spending so wrong" SF project I couldn't think of one wilder than this https://t.co/IN5VHIxkoO

One of the most far-left cities in America’s most far-left state, San Francisco has long been plagued by one of the highest crime rates in the United States, a narcotics epidemic, a homelessness crisis that has left streets in disarray, and lax immigration enforcement. Due to these interconnected problems, “more people are leaving San Francisco than any other metro” area, according to data from real estate website Redfin.

But rather than address them, the city’s Democrat leadership has largely remained focused on satisfying the interests of left-wing activists, from LGBT issues to abortion to COVID-19 mandates.