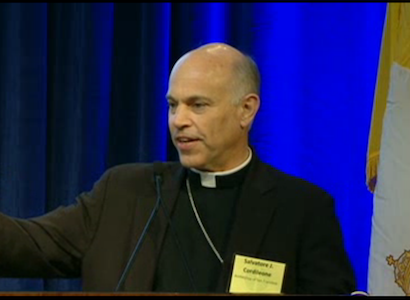 SAN FRANCISCO, CA, February 24, 2015 (LifeSiteNews.com) — The Catholic archbishop of San Francisco was prompt, pastoral and judicious in his response to eight California lawmakers trying to pressure him into backing off of his defense of Catholic teaching in San Francisco high schools.

“Would you hire a campaign manager who advocates policies contrary to those that you stand for, and who shows disrespect toward you and the Democratic Party in general?” Archbishop Salvatore Cordileone asked the state legislators in a February 19 letter.

The Democrat lawmakers wrote to the archbishop February 17 urging him to retract proposed contract language and statements on Catholic teaching for faculty and staff handbooks clarifying the long-established expectation that Catholic school teachers uphold Church teaching.

The politicians told Archbishop Cordileone his efforts to protect Catholic identity in archdiocesan schools “conflict with settled areas of law,” “foment a discriminatory environment,” “send an alarming message of intolerance to youth,” and “strike a divisive tone,” as well as infringe upon personal employees’ freedoms and violate their civil rights.

Catholic teaching on marriage, abortion, and contraception have been at the heart of resistance to the archbishop’s measures.

Archbishop Cordileone said more clarity on the Catholic faith was needed when the archdiocese announced the new contract clauses and policy statements on sexual morality and religious practice for faculty and staff handbooks in early February. The material for the statements came directly from the Catechism of the Catholic Church.

While the archbishop was clear in that the morality passages were not an effort to target anyone, it has not satisfied those upset by them.

In this latest incident with the lawmakers, the archbishop encouraged them to check out the information on the issue on the archdiocese’s website to clear up any misinformation that was spreading, giving as example, “the falsehood that the morality clauses apply to the teachers’ private life.”

Archbishop Cordileone then illustrated the point of how he does not expect to hire just Catholics to staff archdiocesan schools.

“On the other hand, if you knew a brilliant campaign manager who, although a Republican, was willing to work for you and not speak or act in public contrary to you or your party – would you hire such a person?” the archbishop asked. “If your answer to the first question is ‘no,’ and to the second question is ‘yes,’ then we are actually in agreement on the principal point in debate here.”

He then proceeded in the letter with the crux of the issue.

“Now let’s say that this campaign manager you hired, despite promises to the contrary, starts speaking critically of your party and favorably of your running opponent, and so you decide to fire the person,” Archbishop Cordileone posed. “Would you have done this because you hate all Republicans outright, or because this individual, who happens to be a Republican, violated the trust given to you and acted contrary to your mission?”

“If the latter, then we are again in agreement on this principle,” he wrote.

“The archbishop’s letter confirms that he wants to use religion to justify employment discrimination,” Ting said February 20, according to the San Francisco Chronicle. “Discrimination in the name of the church or education is still discrimination. It would be illegal for any other employer to do the same thing.”

Archbishop Cordileone, chair of the US Bishops’ Subcommittee for the Promotion and Defense of Marriage, has been known for standing up for Church teaching, including responding to pressure from San Francisco government leaders and federal lawmakers for him to withdraw from participation in the March for Marriage, by saying it was his job as a bishop to proclaim the truth.