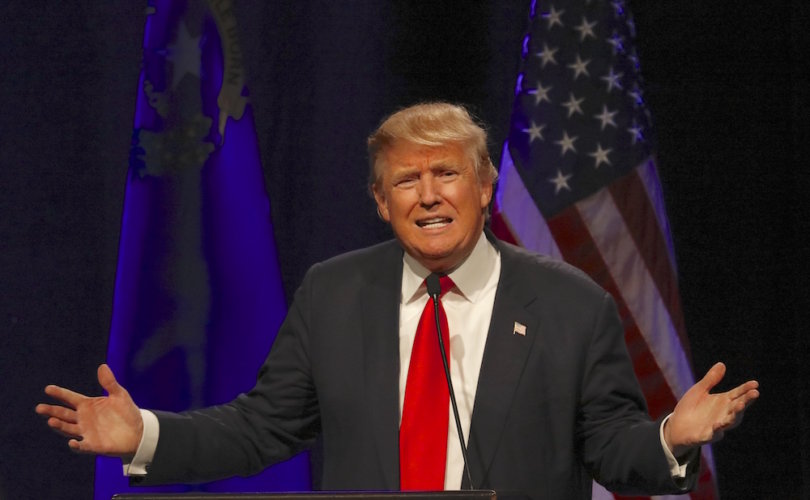 SAN JOSE, California, October 28, 2016 (LifeSiteNews) – In a statement implicitly directed at Donald Trump, the Catholic bishop of San Jose said that the suggestion the U.S. election is rigged “borders on the seditious.” Yet this same bishop appears so far to have failed to comment on Hillary Clinton’s abortion extremism, a viewpoint condemned by St. John Paul II as preparing the way for totalitarianism.

“This year’s contentious and unsettling presidential race threatens our ability to come together as one people,” Bishop Patrick J. McGrath said. “The claims by some of our fellow citizens that they will not accept the final outcome of the election borders on the seditious, portending a future that would be neither civil, nor true to our common roots as Americans. We cannot do this. It is not who we are, not who we are called to be.”

“I ask Catholics and all people of good will to come together on November 8th and 9th and on all of the days that follow to continue to forge one nation, subject to the rule of law and to unite as one American people, committed to the common good of these United States, with its government ‘of the people, by the people and for the people,’” McGrath concluded.

On September 9, McGrath released a statement on voting that equated the moral weight of abortion, environmentalism, and immigration.

“There are key moral and social issues that need to be considered in casting one’s vote,” he said. “The teaching of Pope Francis is clear that there are a number of concerns that must be included in moral decision-making. Among these are abortion, poverty, capital punishment, care for the environment, assisted suicide, and immigration.”

The Catechism of the Catholic Church teaches that abortion is intrinsically evil and homosexual acts are “intrinsically disordered” (CCC 2270-2274, CCC 2357).

“Under no circumstances can [homosexual acts] be approved,” the Catechism instructs (CCC 2357). The Catholic Church classifies poverty, execution, care for the environment, and immigration as social ills – societal issues that Catholics may disagree on about how to best solve – rather than intrinsic evils.

For the first time in history, the Democratic Party platform supports taxpayer-funding of abortions through all nine months of pregnancy and the expansion of U.S.-funded abortion abroad. The Democratic Party platform also supports the “right” to abortion, same-sex “marriage,” transgender bathrooms, and revoking the tax-exempt status of religious universities that refuse to open men access to women’s bathrooms and vice versa.

Clinton famously said that “religious beliefs” against abortion “have to be changed.” She also backs the Obama administration’s HHS mandate, which forces churches to fund contraception and abortion-inducing drugs.

“Every Catholic citizen has the responsibility to form their conscience by considering the complexity of the issues, the teaching of the Church, and their own relationship with the Lord,” said McGrath. “We are bound to vote according to our conscience.”

The diocese's website boasts a “Catholic LGBT Ministry” that “offers a monthly, 'All Are Welcome' Mass for LGBT Catholics, their families, friends, and all our brothers and sisters in Christ.”

A man in a local news video highlighting the diocescan “LGBT Ministry” says that demand for the Masses dwindled to only six regular attendees.

“It won't be easy to change hundreds of years of Church doctrine, but this could be a first step,” the video's narrator said.

The Diocese of San Jose did not respond to multiple requests for comment.