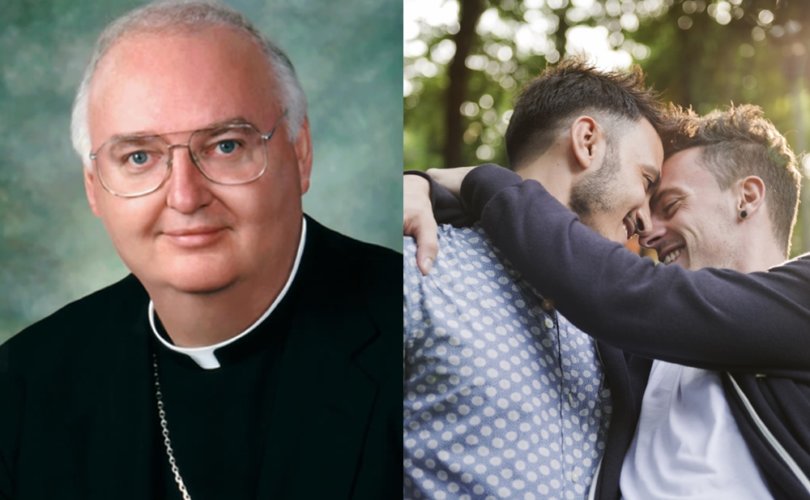 SAN JOSE, California, July 4, 2017 (LifeSiteNews) — San Jose Bishop Patrick McGrath told practicing homosexuals that they will not be refused Holy Communion or a Christian burial in his diocese, as long as they request them in “good faith.”

Bishop McGrath issued the directive last week in response to Illinois Bishop Thomas Paprocki who, following Catholic teaching, said that those in same-sex “marriages” shouldn't present themselves to or be admitted to Holy Communion, nor should they receive a Catholic funeral if they died without showing signs of repentance.

“Recent news reports of policies and practices related to members of the LGBT community in other dioceses can be confusing,” he wrote in his June 29th directive.

“I take this opportunity to assure you that the pastoral response in the Diocese of San Jose remains just that: compassionate and pastoral. We will not refuse sacraments or Christian Burial to anyone who requests them in good faith,” he added.

“Finally, let us remember and be guided by the words of Pope Francis: ‘The Eucharist is not a prize for the perfect, but a powerful medicine and nourishment for the weak.’ he said.

A parish in the San Jose diocese posted the directives to Instagram and called Bishop McGrath “the best” for “providing these services to ALL people, regardless of their sexual orientation.”

“Our bishop is the best. Some Catholic churches in our country have been denying funeral services or communion to members of the LGBT community. However, our bishop just put out a letter saying that our diocese (a collection of 52 churches in Santa Clara County) will continue providing these services to ALL people, regardless of their sexual orientation. Go, Bishop McGrath!!” the post stated.

McGrath has championed Pope Francis’ vision for an ‘inclusive’ and ‘diverse’ Church where a new understanding of “mercy” has been used to encourage pastoral practices that are sometimes at odds with clear Catholic doctrine.

The diocese's website boasts a “Catholic LGBT Ministry” that “offers a monthly 'All Are Welcome' Mass for LGBT Catholics, their families, friends, and all our brothers and sisters in Christ.” Earlier this year the diocese’s Catholic paper ran a piece claiming Jesus would have marched in the pro-abortion Women’s March because the “values of the March aligned particularly well with Catholic Social Teaching.” Last year McGrath released a statement on voting in the U.S. federal election that equated the moral weight of abortion, environmentalism, and immigration.

McGrath’s guidelines, which completely contradict those of his brother bishop, come as no surprise under the Francis’ pontificate. The Pope’s ambiguous remarks have emboldened those seeking to undermine the Church’s perennial teaching on marriage, sexuality, and conscience. The result is that priests, bishops, and cardinals within the Church are now contradicting one another on what the Catholic Church teaches.

Citing Canon 915 and 916, Paprocki wrote, “Given the objectively immoral nature of the relationship created by same-sex marriages, persons in such unions should not present themselves for Holy Communion, nor should they be admitted to Holy Communion.”

Canon 915 says that those “obstinately persevering in manifest grave sin are not to be admitted to Holy Communion.” Canon 916 instructs Catholics conscious of grave sin not to “receive the body of the Lord without previous sacramental confession.”

But it was Paprocki’s guidelines regarding funerals for active homosexuals who die unrepentant that especially angered left-leaning media and homosexual activists.

“Unless they have given some signs of repentance before their death, deceased persons who had lived openly in a same-sex marriage giving public scandal to the faithful are to be deprived of ecclesiastical funeral rites,” the guidelines state.

The guidelines follow Canon Law which state that “manifest sinners…cannot be granted ecclesiastical funerals” if it gives “public scandal” to the faithful, that is, if it leads another to “do evil.”

Paprocki wrote that he has a “responsibility as diocesan bishop to guide the people of God entrusted to me with charity but without compromising the truth.”

“The Church has not only the authority, but the serious obligation, to affirm its authentic teaching on marriage and to preserve and foster the sacred value of the married state,” he said.

A petition thanking Bishop Paprocki for issuing pastoral guidelines based on Catholic teaching has been signed by 2,400 people.