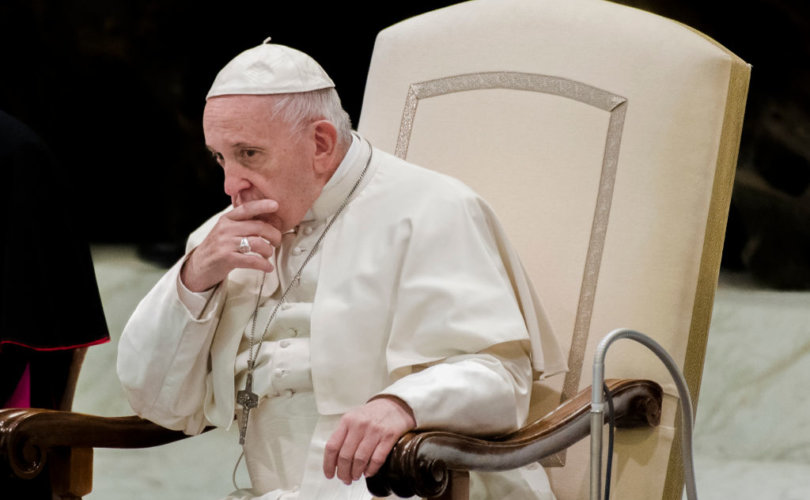 ROME, April 2, 2019 (LifeSiteNews) — Pope Francis aroused more controversy this week, making even more explicit his apparent belief that the death penalty is always and everywhere wrong, while frankly acknowledging that the Church has not taught this in the past.

He sought to justify this change by invoking the ancient theologian, St. Vincent of Lérins, and his doctrine of development in the Church.

During the inflight press conference on his return from Morocco on Sunday, March 31, a journalist asked the Pope if he were concerned that Muslims who convert to Christianity thereby “risk” imprisonment or even death in some Muslim countries.

In Morocco, as in many Muslim countries (such as the United Arab Emirates which the Pope also recently visited), conversion to Christianity is banned.

The Pope expounded on the point, invoking the ancient saint whose thought played a pivotal role in Blessed John Henry Cardinal Newman’s classic work, On the Development of Christian Doctrine. He told journalists aboard the papal plane:

A fifth-century French monk, Vincent of Lérins, coined a beautiful expression to explain how one can grow in faith, explain things better, and also grow in moral [understanding] but always being faithful to the roots. He said three words but they indicate the road: he said that growth in the explaining [esplicitazione] and awareness of faith and morals must be ut annis consolidetur, dilatetur tempore, sublimetur aetate, that is, growth must be strengthened through the years, expanded over time, but it is the same faith that is exalted over the years.

“This is how we understand, for example, that today we have removed the death penalty from the Catechism of the Catholic Church,” he said.

“Three hundred years ago, heretics were burned alive. Because the Church has grown in moral understanding, and in respect for the person,” he added.

This is not the first time Pope Francis has invoked St. Vincent of Lérins.

In an interview with the Jesuit-run La Civiltà Cattolica six months into his pontificate (September 2013), the Pope argued on the basis of the aforementioned statement from the fifth–century monk that “the thinking of the Church must … understand how human beings understand themselves today, in order to develop and deepen the Church’s teaching.”

In November 2016, he cited the same passage as he questioned why young Catholics would be drawn to the traditional liturgy.

And in his ‘God of surprises’ homily, on May 8, 2017, he again had recourse to St. Vincent’s words, inviting Catholics to pray for the “grace of discernment” so as not to “fall into immobility, rigidity and a closed heart.”

Inflight press conferences have no magisterial weight. Nonetheless, LifeSite asked one of leading experts on the Catholic Church’s teaching on the death penalty to weigh in on the Pope’s latest remarks and invocation of St. Vincent of Lérins.

An expert weighs in

Renowned Catholic philosopher Edward Feser, Associate Professor of Philosophy at Pasadena City College in Pasadena, California, is one of the foremost contemporary writers in the Thomistic tradition, and a leading expert on the Church’s teaching on the death penalty.

He is the author of numerous works, including By Man Shall His Blood Be Shed (with Joseph Bessette) and the forthcoming Aristotle’s Revenge.

By Man Shall His Blood Be Shed is a study and defense of the perennial Catholic teaching on the death penalty as legitimate in principle and often advisable in practice even in contemporary social conditions.

In comments to LifeSite, Feser said:

It is odd for the pope to cite St. Vincent of Lérins in defense of the recent change to the Catechism, because St. Vincent was the opposite of sympathetic to innovative and ambiguous theological formulations of the kind represented by the new language. Indeed, his major theme was precisely to condemn, in harsh and unmistakable terms, all ‘novelties’ in doctrine, by which he meant teachings that were not true developments but reversals of what the Church has taught in the past.

He said: “Suppose, to take an artificial example, that the Church had taught that ‘All men are mortal’ and ‘Socrates is a man.’ If she later explicitly taught that ‘Socrates is mortal,’ then this would not be a novelty in the sense condemned by St. Vincent, because this follows logically from what she had earlier taught.”

“Even if she had not taught it explicitly, she did teach it implicitly. Simply making this explicit would be a true development of doctrine,” he added.

The noted philosopher continued: “Suppose instead, however, that the Church later taught that ‘Socrates is not mortal,’ This would be a novelty, a corruption of doctrine and not a true development at all, because it would contradict what was implicitly taught earlier.”

Feser insisted that not only does St. Vincent of Lérins not support logical rupture but he is preoccupied with preventing such novelties. He said:

Now, St. Vincent absolutely hammers on the theme that Catholics must avoid novelties or even reinterpretations of past doctrine, and that when some new teaching or reinterpretation seems to conflict with antiquity, we must cling to antiquity. Quite rigidly, you might say. He is very, very insistent on this and very harsh even on people who would try to use ambiguous formulations to smuggle in novelties, let alone those who brazenly propose them.

The author of By Man Shall His Blood Be Shed told LifeSite:

“So, for the Church now to teach that capital punishment is always and intrinsically immoral would be a crystal-clear example of a novelty in St. Vincent’s sense,” Feser argued.

“This is why it is the Pope’s duty clearly and explicitly to reaffirm the traditional teaching that capital punishment is not always and intrinsically wrong, even if he also wants to recommend against its actual use in modern circumstances,” he explained. “This is exactly what his predecessor St. John Paul II was careful to do, and there can be no doubt that it would be exactly what St. Vincent would urge.”

Sanctuary of truth vs. brothel of error

A Dominican theologian who spoke with LifeSite on condition of anonymity said regarding Pope Francis’s recent comments on the death penalty: “On capital punishment Pope Francis unfortunately continues to talk as if he can justify putting himself in contradiction with the teaching of the Church by speaking of development.”

“As Bishop Athanasius Schneider has recently said, Pope Francis is contradicting a bi-millennial doctrine,” he added, referring to Schneider’s essay on what the Church should do about a heretical pope.

“With regard to religious freedom,” the theologian continued, “the Church has a God-given power of using sanctions against her delinquent members, including punishing crimes such as heresy. As modern canon law still teaches, these sanctions can be either spiritual, like excommunication, or bodily, like confinement to a monastery.”

“In a Catholic country which officially recognizes the Church’s authority, the Church can call on the civil power to help enforce these sanctions,” he said. “No pope or council can strip this right from the Church, though they may decide not to use it,” he said.

“Unfortunately,” the Dominican sighed, “as often with this pope, his words savor strongly of the heresy of modernism, which denies that the dogmas of the Church keep the same meaning from one generation to the next.”

He noted that St Vincent’s great concern is “that we should believe only what has always been believed — as he puts it, that we must ‘in no way depart from those interpretations which it is manifest were notoriously held by our holy ancestors and fathers’ (Commonitorium Primum, chapter 2).”

“He insists that development must be ‘in the same doctrine, in the same sense, and in the same meaning,’” he explained. “Otherwise, he says it is like a change from a man to a monster.”

Citing the same work from the ancient saint of Lérins, the theologian concluded:

St. Vincent warns against false development, writing: ‘If what is new begins to be mingled with what is old, foreign with domestic, profane with sacred, the custom will of necessity creep on universally, till at last the Church will have nothing left untampered with, nothing unadulterated, nothing sound, nothing pure; but where formerly there was a sanctuary of chaste and undefiled truth, thenceforward there will be a brothel of impious and base errors.’ This is the danger today” (ch. 58).

Summing up St. Vincent of Lérins

The authentic doctrine of St. Vincent of Lérins might best be summed up in the words taken from him with which the First Vatican Council concludes its dogmatic constitution on the Catholic Faith, Dei Filius. The passage reads:

That meaning of the sacred dogmas is ever to be maintained which has once been declared by Holy Mother Church, and there must never be any abandonment of this sense under the pretext or in the name of a more profound understanding. May understanding, knowledge and wisdom increase as ages and centuries roll along, and greatly and vigorously flourish, in each and all, in the individual and the whole Church: but this only in its own proper kind, that is to say, in the same doctrine, the same sense, and the same understanding [Vincent of Lérins, Commonitorium primum 23].

Sawing off the branch on which he sits: Experts question Francis attack on popes over death penalty