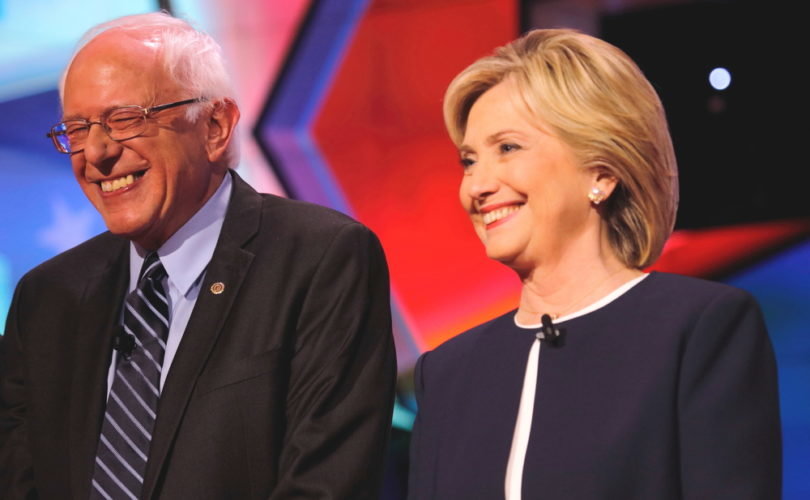 WASHINGTON, D.C., February 12, 2016 (LifeSiteNews) – Both candidates for the Democratic presidential nomination have endorsed a key pillar of the population control agenda, for the first time pledging to “fix” a U.S. law prohibiting foreign aid from funding abortion overseas.

An unidentified activist for the group asks if the former Secretary of State will “help fix the Helms Amendment” – a 1973 law that blocks federal dollars from paying for abortion “as a method of family planning” overseas.

“Oh yeah, yeah, yeah. I'm on record on that,” Clinton replies on the video, which was publicized by The Huffington Post.

She continues, “One of the reasons why I -” before abruptly interrupting herself and giving the activist a thumbs-up as the video ends.

Despite her comment, Clinton had not publicly said she would change the way the law is implemented in any way. In an Iowa town hall meeting last November, she said she would “we have to take a look at this for conflict zones” where rape is used as a weapon, but held out the possibility that a future government “maintains our prohibition.”

“Sen. Sanders is opposed to the Helms amendment,” Arianna Jones, Sanders' deputy communications director, told The Huffington Post. “As president, he will sign an executive order to allow for U.S. foreign aid to pay for abortions in cases of rape, incest, or when the life of the woman is at risk. He will also work with Congress to permanently repeal both the Hyde and Helms amendments.” The Hyde Amendment prohibits federal funding of abortions for American women except in the cases of rape, incest, or to save the life of the mother.

The question is the latest in an ongoing attempt to siphon money from the U.S. Treasury into the hands of abortionists, at home and abroad.

While the late Sen. Jesse Helms, who was staunchly pro-life, intended to prevent taxpayers from underwriting abortion, population control advocates and others who promote abortion say the law he authored never did that – but three Democratic presidents somehow missed that fact.

“The restriction has been wrongly implemented by all eight presidential administrations since its inception, as a total ban on abortion care,” according to the Center for Reproductive Rights.

Feminist activists and non-governmental organizations like the Global Justice Center have lobbied President Obama to reinterpret the rule and fund abortion for African women raped by Boko Haram and other terrorist organizations in the region.

Although President Obama shown little restraint in recasting the law – for instance, claiming that civil rights laws banning sexual discrimination apply to transgender people – he has declined to do so in this case.