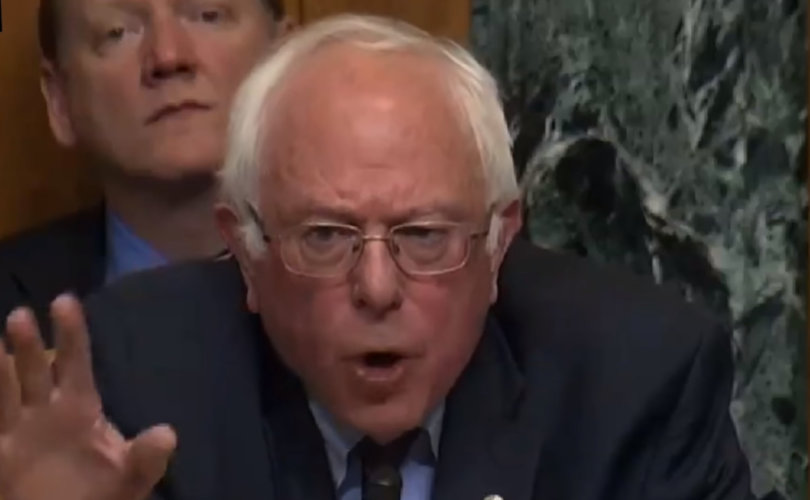 “Human population growth has more than doubled in the past 50 years. The planet cannot sustain this growth,” an audience member claimed. “I realize this is a poisonous topic for politicians, but it’s crucial to face. Empowering women and educating everyone on the need to curb population growth seems a reasonable campaign to enact. Would you be courageous enough to discuss this issue and make it a key feature of a plan to address climate catastrophe?”

“The answer is yes, and the answer has everything to do with the fact that women, in the United States of America, by the way, have a right to control their own bodies and make reproductive decisions,” the Vermont lawmaker answered. “And the Mexico City agreement, which denies American aid to those organizations around the world that allow women to have abortions or even get involved in birth control, to me is totally absurd.

“So I think especially in poor countries around the world, where women do not necessarily want to have large numbers of babies and where they can have the opportunity through birth control to the number of kids they have, something I very, very strongly support,” he declared.

An absolutist pro-abortion stance is nothing new for Sanders, whose uncompromising abortion platform includes judges that would not only uphold but expand Roe v. Wade, directing the U.S. Department of Justice to “go after those states” that restrict abortion “in every way that I legally can,” support for federal abortion funding, voting against medical care for newborns who survive abortions, and refusing to answer whether abortion is ever wrong.

Restoring foreign aid to organizations that commit and promote abortion is also a standard Democrat position, but major candidates and officeholders tend to avoid acknowledging any connection between their abortion advocacy and population control or climate change.

“Bernie Sanders’ repugnant ‘solution’ to climate change – eliminating the children of poorer nations through abortion, paid for by American tax dollars – should be condemned across the political spectrum,” Susan B. Anthony List president Marjorie Dannenfelser responded. “This takes Democratic abortion extremism to a new low. Every Democratic candidate for president should immediately be asked where they stand on eugenic population control, especially frontrunner Joe Biden in light of his past comments condoning the Chinese government’s oppressive One-Child policy.”

While the CNN town hall was predicated on the idea that anthropogenic global warming (AGW) — the view that human activity rather than natural phenomena is primarily responsible for Earth’s changing climate — is an established phenomenon and the only question is how to respond, conservatives have long disputed both the underlying scientific claims as well as the idea that population control would be an effective response (let alone an ethical one).

AGW proponents suffered a blow in 2010 with the discovery that their leading researchers had engaged in widespread data manipulation, flawed climate models, misrepresentation of sources, and suppression of dissenting findings. Activists claim there is a “97 percent scientific consensus” in favor of AGW, but that number distorts an overview of 11,944 papers from peer-reviewed journals, 66.4 percent of which expressed no opinion on the question; in fact, many of the authors identified with the AGW “consensus” later spoke out to say their positions had been misrepresented.

In March, Greenpeace co-founder Patrick Moore called AGW alarmism a “complete hoax and scam,” a “kind of toxic combination of religion and political ideology” that is “as bad a thing that has happened to science in the history of science.”

As for population control, overpopulation skeptics point out that multiple predictions throughout history that population growth would cause mass starvation have failed to come true. Even the Chinese government, which for decades practiced forced abortion and sterilization, now fears its current birth rates are too low to sustain its economy and support its retirees.

Finally, critics have questioned the sincerity of Sanders’ rhetoric about climate change, noting that he doesn’t appear to lead by example in his own life. He owns three homes, and last year his campaign spent almost $300,000 for a single month of private air travel (the campaign said it compensated by buying almost $5,000 in carbon offsets, essentially pledges that others will supposedly reduce emissions by an equivalent amount).