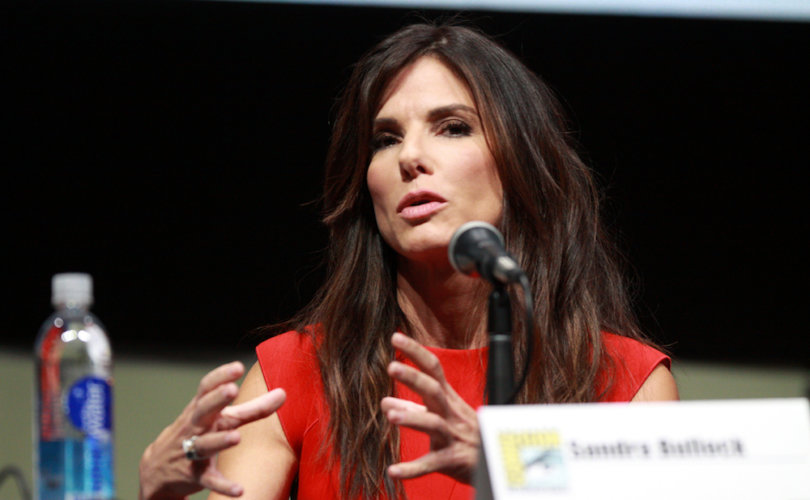 Davis is the former Texas state senator most famous for an 11th-hour abortion filibuster in Texas.

In 2013, she filibustered Senate Bill 5, a sweeping pro-life bill that sought to protect pain-capable 20-week-old preborns, ensure that abortionists had hospital contracts for emergencies, require abortion businesses to have the same safety standards as legitimate surgical facilities, and provide better care to women taking the dangerous abortion drug RU-486.

The blonde state senator famously donned pink sneakers, had a catheter put in her bladder, and wore a back brace for her filibuster. Her stunt didn’t stop the pro-life legislation, but it gained her fame with abortion supporters and earned her the nickname “Abortion Barbie.” The U.S. Supreme Court later overturned parts of Senate Bill 5.

Mario Correa wrote a screenplay, “Let Her Speak,” based on Davis’ self-penned biography.

Correa, who is openly gay, is most famous as the playwright of “Tail! Spin!” a “sexually charged” play ridiculing politicians’ sex scandals. He was a political aide to Congresswoman Connie Morella in the 1990s who stood out among Republicans as pro-abortion and pro-homosexuality. Morella voted for tax-paid contraceptives and medical marijuana, and voted against making English the country’s official language and legislation to stem illegal immigration.

Shortly after the abortion filibuster, Davis came out in support of a pain-capable 20-week abortion cutoff. After gaining fame as the quintessential obstructionist, she later condemned Republicans delaying Obama judicial nominee confirmations as wrong and harmful to the nation.

Buoyed by her time in the limelight, Davis ran for governor but lost in a landslide to pro-life Greg Abbott.

Undaunted, Davis has become a popular abortion apologist, even speaking at Notre Dame to Catholic college students about her abortion as “made out of love.” The Notre Dame Gender Studies website advertisement for the event called Davis “a modern-day Texas heroine.”

In 2015, Davis was asked at a Planned Parenthood rally why it was “love” to abort a seven-pound baby. “That never happens. It never happens. It really never happens,” Davis replied. She then about-faced, admitting late-term abortions happen but only “either the mother’s life is in danger or the child’s life is in a very precarious situation.”  Her bottom line is to stand for abortion because “we can’t ever know … what people are dealing with when they make those personal choices.”

Bullock has an adopted 7 1/2 year-old son. When she won an Oscar for “The Blind Side,” she thanked “moms that take care of the babies and the children no matter where they come from.”

She told Vogue magazine, “If all of a sudden someone said, ‘You have five more kids,’ I’d be totally OK with it.”

Bullock is waiting to see who else will join the cast before officially signing on to the Davis biopic.