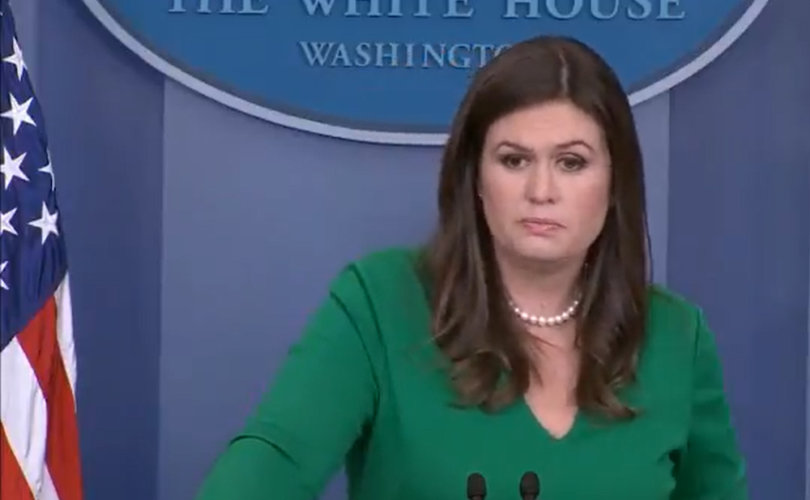 WASHINGTON, D.C., March 14, 2019 (LifeSiteNews) – The Trump administration has no intention of softening its rhetoric about Democrats and their radical views on abortion, judging by White House Press Secretary Sarah Huckabee Sanders’ latest denunciation of the party’s refusal to vote against infanticide.

During the Monday press briefing, Sanders was asked about a report alleging that President Donald Trump told a private meeting of Republican donors that “the Democrats hate Jewish people,” based on the party’s refusal to unequivocally sanction Minnesota Rep. Ilhan Omar for a series of anti-Semitic comments. Sanders refused to confirm or deny the quote, but it led to an exchange on the broader subject of Trump’s rhetoric.

“Do you think that the President has thought at all — going into this 2020 campaign — that the rhetoric just needs to be lowered, whether it’s talking about Democrats, the media, immigrants?” CNN’s Jim Acosta asked. “Or should we just plan on hearing the President use the same kind of language that we heard in 2016 and all through the first couple of years of this administration?”

“Look, I think that the real shame in all of this is that Democrats are perfectly capable of coming together and agreeing on the fact that they’re comfortable ripping babies straight from a mother’s womb or killing a baby after birth, but they have a hard time condemning the type of comments from Congresswoman Omar,” Sanders responded. “I think that is a great shame.”

Late last month, the U.S. Senate voted 53-44 in favor of the Born-Alive Abortion Survivors Protection Act, which would supplement existing law by specifically requiring abortionists to get infants born alive after failed abortions to hospitals. Despite clearing a simple majority, the vote fell short of the 60 votes necessary for the bill to overcome the current filibuster rules and pass.

All but three Democrats opposed the bill, including every senator currently seeking the party’s 2020 presidential nomination. Republicans including President Donald Trump and Vice President Mike Pence have forcefully denounced Democrats for protecting infanticide, which is suspected to have contributed to a sudden ten-point spike in pro-life public opinion.

….This will be remembered as one of the most shocking votes in the history of Congress. If there is one thing we should all agree on, it’s protecting the lives of innocent babies.

Democrats who control the U.S. House of Representatives have repeatedly blocked efforts to bring the anti-infanticide bill up for a vote.

In response, House Minority Whip Steve Scalise and GOP Rep. Ann Wagner plan to file a discharge petition that can force a vote on the bill regardless of leaders’ opposition if it gets at least 218 signatures (a simple majority). When the House considered the same legislation in 2015, only five Democrats backed it, and the number of pro-life House Democrats has decreased since then.

Readers can click here to read, sign, and share LifeSiteNews’ petition urging the House to vote on the Born-Alive Abortion Survivors Protection Act. At the time of this writing, the petition has amassed more than 13,000 signatures.