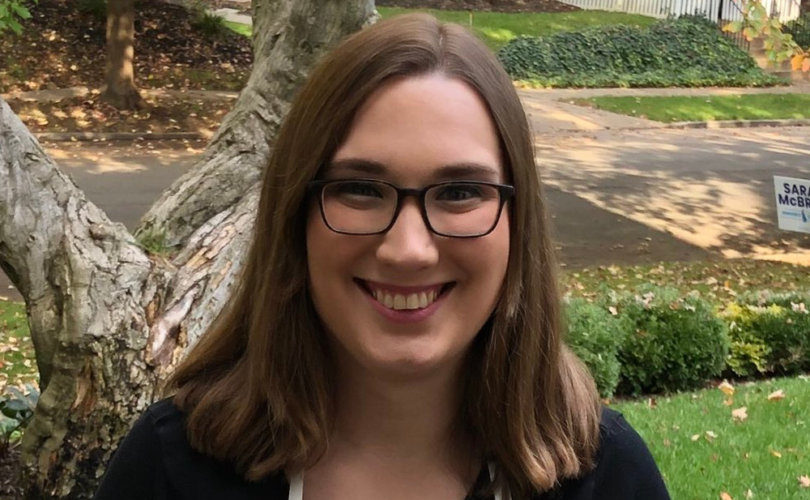 Sarah McBride, state senator in Delaware, is a man claiming to be a womanTwitter

DOVER, Delaware, November 3, 2020 (LifeSiteNews) — Sarah McBride, a man who claims to be a woman, was elected to the State Senate in Delaware today, making him the first transgender state senator in United States history.

McBride is one of a growing number of legislators suffering from gender dysphoria. His election follows that of the first openly transgender lawmaker, Virginia state Rep. Danica Roem, as well as Reps. Gerri Cannon and Lisa Bunker, who were elected simultaneously as New Hampshire’s first transgender state legislators, and Colorado state Rep. Brianna Titone.

All for state representatives are men claiming to be women.

The announcement of McBride’s election received an enthusiastic response on Twitter, eliciting congratulations from the likes of Chelsea Clinton and Planned Parenthood.

So exciting! Congratulations, @SarahEMcBride. Thank you for your historic race and WIN. #ElectionDay https://t.co/uA6qRJqtKh

McBride has previously worked for the campaign of Joe Biden’s late son Beau Biden for election as Delaware’s state attorney general. The Hill reported this work led to “a friendship between the two.”

Beau reportedly called McBride, after he came out publicly as a “transgender,” to offer his support, saying, “Hallie and I are so proud of you. We love you, and you’re still part of the Biden family.”

Joe Biden himself came out strongly in support of gender ideology earlier this year.

“Let’s be clear: Transgender equality is the civil rights issue of our time,” tweeted Biden. “There is no room for compromise when it comes to basic human rights.”

Delaware law firm Richards Layton & Finger reported that “under the Act, discrimination against a person on the basis of gender identity in housing, employment, public works contracting, public accommodations, and insurance” became prohibited. It also allowed for “enhanced penalties under Delaware’s hate crimes law for targeting a person because of his or her gender identity.”