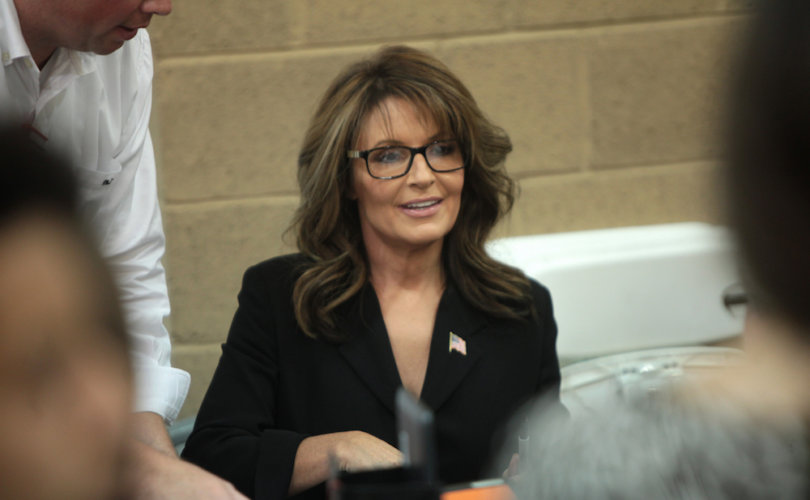 Via a request from a speakers bureau, “my daughter and I were asked to travel across the country where Cohen (I presume) had heavily disguised himself as a disabled U.S. veteran, fake wheelchair and all,” Palin explained on her website. “Out of respect for what I was led to believe would be a thoughtful discussion with someone who had served in uniform, I sat through a long ‘interview’ full of Hollywoodism’s disrespect and sarcasm – but finally had enough and literally, physically removed my mic and walked out, much to Cohen’s chagrin.”

In addition, Palin claimed that “after great costs on our part in time and resources,” Cohen’s production team “purposefully dropped my daughter and me off at the wrong Washington, D.C. airport after the fake interview, knowing we’d miss all flights back home to Alaska.” She added that they “refus(ed) to take our calls to help get us out of the bind they’d put us in for three days.”

Most of Cohen’s work consists of assuming fictitious personas and filming himself interacting with real people (including a range of public figures) who are unaware he’s playing a role, and capturing humorous or unintentionally-humiliating footage of them.

Palin’s accusation comes as Cohen released a trailer for his upcoming series Who Is America? that premieres July 15 on the CBS-owned Showtime. It teases former Vice President Dick Cheney as another unsuspecting interview subject.

Following Palin’s statements, conservative radio host and former Rep. Joe Walsh, R-Illinois, said he “totally believe(d) Palin’s account, revealing that he too had once fallen prey to Cohen’s tactics. “Dressing up as a wounded veteran is absolutely stolen valor. His tactics are disguisting (sic),” Walsh said.

Cohen also has a history of bad blood with President Donald Trump, stemming from the former catching the latter in a prank interview in 2003, long before the real estate mogul’s reinvention as a Republican political figure.

Palin issued a challenge to Cohen, CBS, and Showtime to donate the show’s proceeds to a veterans’ charity.

“Mock politicians and innocent public personalities all you want, if that lets you sleep at night, but HOW DARE YOU mock those who have fought and served our country,” she declared.

“CBS and Showtime did not immediately comment on Palin's criticisms,” NBC News reported. Cohen has not publicly responded either.