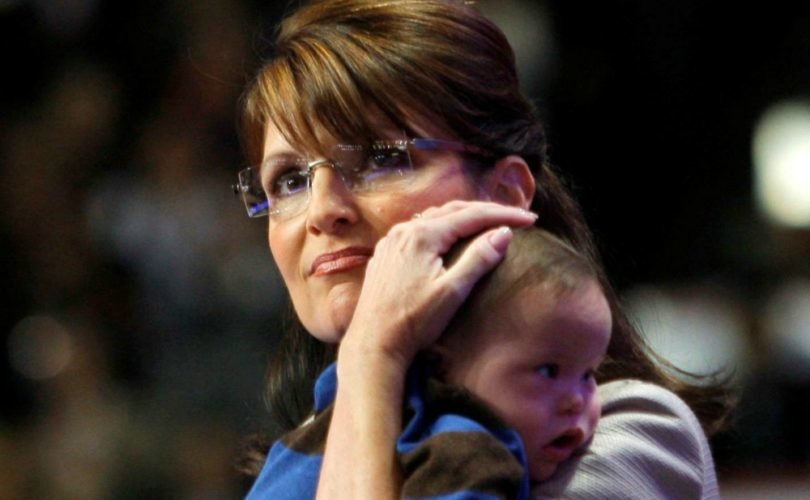 PHOENIX (LifeSiteNews) — Former Alaska governor and 2008 Republican vice presidential nominee Sarah Palin drew a line in the sand on COVID-19 vaccination Sunday, declaring she would take the shot “over my dead body.”

Palin was speaking at conservative student group Turning Point USA’s Americafest event in Phoenix, where she explained to TPUSA founder Charlie Kirk that she has already had and recovered from COVID, making the vaccines moot for her regardless of their safety or effectiveness. “Do you remember he said that if you had Covid, you would be naturally immune?” she asked, the Daily Mail reports.

“So at the time we were led to believe we wouldn’t need to have the shot. Well, then they changed their tune,” Palin continued. “Those of us who have had Covid, they’re telling us that even though we’ve had it — we have natural immunity — now that we still have to get a shot. And it’ll be over my dead body that I get a shot. I will not. I won’t do it and they better not touch my kids either.”

The Mail notes that the governor described her family’s COVID situation to People Magazine in March, during which one of her daughters first came down with the virus, then her son Trig, then Palin herself.

“I strongly encourage everyone to use common sense to avoid spreading this and every other virus out there,” she said at the time. “There are more viruses than there are stars in the sky, meaning we’ll never avoid every source of illness or danger … But please be vigilant, don’t be frightened, and I advise reprioritizing some personal time and resources to ensure as healthy a lifestyle as you can create so when viruses do hit, you have at least some armor to fight it.”

In March Palin endorsed mask-wearing as “better than doing nothing,” despite evidence that masks did little if anything to curb the spread of the virus.

On natural immunity, however, the governor is on firmer ground. The conservative Brownstone Institute has compiled 140 research studies finding that COVID immunity from prior infection “is equal to or more robust and superior to existing vaccine,” yet the federal government is heavily invested in the narrative that natural immunity is unreliable and the vaccines are the only true protection against COVID.

In September, White House COVID czar Dr. Anthony Fauci admitted that “I don’t have a really firm answer to you on” why those who have already had COVID should get vaccinated for it, but it was “something that we’re going to have to discuss.” Many Americans assumed such discussions were already well underway.

Studies have found that vaccine-induced COVID protection wanes around six months (or potentially sooner). In October the U.S. Food & Drug Administration (FDA) announced it was expanding emergency-use authorization for booster shots six months after the Pfizer and Moderna vaccines, and two months after the Johnson & Johnson vaccine. By contrast, a recent Yale study projected that natural immunity would last three times longer at 17 months.

Palin’s stance contrasts sharply with that of former President Donald Trump, who recently revealed he took a COVID booster shot, urged his followers to embrace and claim credit for the vaccines, and accused conservatives who remain hesitant of “playing right into” their political enemies’ hands. Trump recovered from COVID in 2020. President Joe Biden specifically cited Trump’s comments Tuesday as part of his latest appeal for the COVID vaccines and his administration’s vaccine mandates.