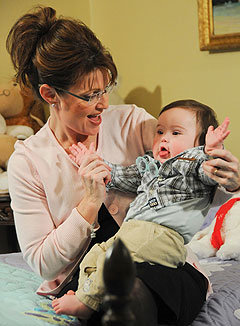 Palin with her son Trig, who has Down syndrome

COLUMBUS, OH, September 9, 2015 (LifeSiteNews) – The Ohio legislature is considering a bill that would ban the killing of pre-born babies on the grounds of a Down syndrome diagnosis. Ohio's Governor John Kasich, however, is trying to broaden his appeal as a presidential candidate and has publicly disavowed single-issue pro-life convictions, saying he and his party should not be “put in a box” by focusing on abortion.

Kasich, though he calls himself a pro-life politician, has not said whether or not he supports the pro-life legislation.

For former Alaska governor Sarah Palin, the Ohio legislation hits close to home. She has a child with Downs, Trig, and she has some advice for Kasich, which she shared on CNN's “State of the Union” Sunday.

Palin says Kasich should champion the pro-life legislation protecting pre-born children who may have Downs. “I don't think because the child has one extra chromosome, they should be able to snuff that life out,” she told interviewer Jake Tapper.

The former governor of Alaska admits that having a child diagnosed with Down syndrome comes as a shock. “There is some fear there of the unknown,” she said. “Certainly, there was fear in my heart about how in the world are we going to be able to handle the challenges up ahead.”

Palin says our society wrongly discourages women from carrying a Downs child to term. “Culture has told these women … you're not capable of being able to handle and nurture and love and raise a child with special needs,” she told Tapper.

But Palin believes that women are both capable and strong, and she shares that any initial fear a woman may feel is quickly outweighed by the beauty of a special child – “the beauty that could come from a child being different, being unique.”

Palin wishes more people, especially abortion advocates, could meet kids like Trig. “They're amazing, wonderful kids,” she said. “They teach us more than we're ever going to be able to teach them.”

Approximately 90% of prenatal Down syndrome diagnoses result in abortion, even though the diagnosis is not always correct.

As Ohio Right to Life president Mike Gonidakis put it, “[e]veryone has a right to live, perfect or not.”

Many parents of Downs children testified for the bill before the state senate. Heather Bellegia-Ernst told the legislators, “With nine out of ten babies with Down syndrome being aborted, extinction is what we are really talking about.”

Rachel Mullen, whose child was one of the many misdiagnosed with Downs in the womb, told the Ohio senate, “As soon as babies are born, they're protected by the Americans With Disabilities Act, but we need this bill so that they can be born and not killed.”

Abortion proponents oppose the legislation, saying that by focusing on the diagnosis of a fetal condition, the bill edges too close to recognizing the child in the womb as a person.

1
Pelosi receives Holy Communion at Mass presided over by Pope Francis
2
Princess Gloria: Global elites think they do good but actually serve the ‘prince of the world’
3
Pope Francis doubles down on restrictions of the Latin Mass in new letter
4
WATCH: John-Henry Westen, Michael Matt react to Pelosi’s Communion at Mass with Pope Francis
5
Arizona becomes first US state to offer comprehensive school choice for all families
Subscribe to Daily Headlines »