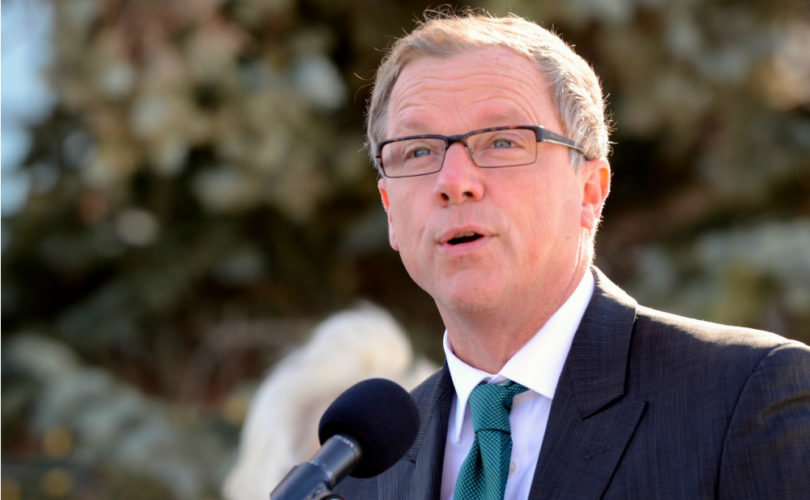 REGINA, Saskatchewan, May 8, 2017 (LifeSiteNews) – Saskatchewan Premier Brad Wall says he will invoke the “notwithstanding clause” of the Constitution to protect the province’s Catholic schools from losing thousands of students.

Wall will use the clause to override a controversial court decision two weeks ago. He ruled as unconstitutional the common practice across Saskatchewan, Alberta and the Northwest Territories of allowing non-Catholics to attend publicly funded Catholic schools, with their per-student funding following them.

One of Canada’s leading constitutional experts, Mary Anne Waldron of the University of Victoria’s law school, called the ruling “peculiar” and “perverse.”

Justice Donald Layh of the Court of Queen’s Bench ruled two weeks ago that only Catholics could attend locally governed, publicly funded Catholic schools established in 1905 by the same federal legislation that set up the province itself.

The law allowed both Catholics and Protestants to establish their own school boards in each community, but did not require it. If the minority did not want their own, they could attend the other one.

But in the case before Layh, the town of Theodore had only one public school. It was closed more than a decade ago. Rather than subject their children to long-distance busing to the nearest community with a public school, the parents persuaded Theodore’s Catholics to demand the right to attend their school. Once they got it, the non-Catholics made it financially viable by filling it with their children.

The public school district sued. Last month, Layh ruled so sweepingly in its favour that he required an estimated 10,000 non-Catholic students across the province to leave their Catholic schools by 2018. Layh required that Catholic baptismal certificates be presented to gain admission to Catholic schools, in an arcane touch reminiscent of the dark days of the 1930s when Saskatchewan had 40,000 Ku Klux Klan members.

(A Conservative government eager for KKK votes ordered religious pictures taken down from the walls of Catholic schools and habits removed from the nuns who taught there.)

Layh cited the Constitution’s protections of religious freedom in reverse to justify his ruling. Those protections were meant only for Catholics. Therefore, only Catholics can attend the schools.

The Catholic School Board Association promised to appeal. Premier Wall vowed to override the ruling.

“We support school choice, including public, separate and faith-based schools,” Wall said in a press release. “We will defend school choice for students and parents. By invoking the notwithstanding clause, we are protecting the rights of parents and students to choose the schools that work best for their families, regardless of their religious faith.”

The notwithstanding clause — clause 33 of the Charter — is an important feature of Canada’s Charter of Rights and Freedoms. It was a concession demanded by western Canadian premiers to win their agreement to the Charter, but it has only rarely been used.

Saskatchewan’s opposition leader, Trent Wotherspoon, responded carefully, supporting the Catholic appeal and declaring the use of the notwithstanding clause at least worthy of “consideration.”

Others with no need to appease Catholic school parents were more critical.

“This strikes me as a troubling overreaction,” University of Saskatchewan law professor Ken Norman told the CBC. “Instead of respecting the judicial process, and doing what everyone else has to do and take its case up to the appeal court … instead of that, we have a premier saying, ‘If need be, we’re going to shift into Defcon mode here.’”

Carpay said the current situation is a perfect example of what the clause was designed to address, which is “a judicial ruling so bad it is important for the legislature to reject it.”

Before the Constitution and the Charter came into force in 1982, judges possessed little authority to overrule laws. But since then judges have thrown out longstanding laws against abortion, same-sex marriage, and euthanasia. Western Canadian premiers who feared that judges would attempt to “legislate” from the bench put in the notwithstanding clause as preventive measure.

“The people of Saskatchewan have seen a court decision so wrongheaded they are using their power reject it,” said Carpay. “It is a deliberate part of Canadian democracy.”

Waldron, who is the author of “Free to Believe: Rethinking Freedom of Conscience and Religion in Canada,” told LifeSiteNews that the judge overlooked that “It is the school that is protected by the Charter — the separate Catholic school — and once that is taken as a given, it seems to me that as long as the school falls within the category of protection, it is entitled to carry on providing education to anyone its doctrines would permit, which includes non-Catholic students.”

Waldron added, “There is no protection for the rights of anyone here, indeed, the effect of the decision is to limit religious choice.”

Paul Bennett, an education professor at St. Mary’s University in Halifax, weighed in on the controversy in the National Post to stress that “robust” alternatives to the public system could only benefit such values as diversity and pluralism. He noted that that Alberta provided public funding for public, Catholic, public Francophone, Catholic Francophone, Protestant, and secular private schools.

Alternative systems provide at least the opportunity for healthy competition in education approaches, he said.

Another key advantage, Bennett argued, was that parents who could not afford private school tuition could use publicly-funded alternatives such as Saskatchewan’s Catholic schools to access “ethical, philosophical, linguistic or disciplinary traditions that accord with their views.”