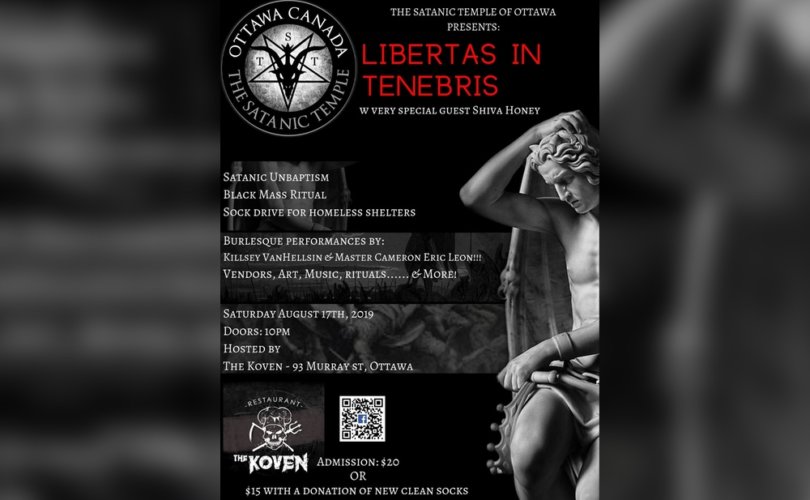 OTTAWA, August 13, 2019 (LifeSiteNews) — The Satanic Temple in Canada is planning to hold a “black mass” at a heavy metal bar in Ottawa this coming Saturday.

The Satanic Temple’s national coordinator Nicholas Marc is selling 50 tickets at $20 each for what he says is a public black mass planned at The Koven on August 17.

“To (the Satanic Temple’s) knowledge this will be the first organized public black mass in Canadian history,” Marc told Global News.

Marc told Global News the Satanic ritual is “an expression of personal liberty and freedom” and that the “freeing expression is found in the blasphemy.”

He said there will be “the use of symbols and Latin text” at the black mass.

“Essentially, it involves using traditional symbols and inverting them to create a ritual that is meant to be the opposite of traditional [M]ass,” he said.

Encyclopedia Britannica describes a black mass as “a blasphemous and usually obscene burlesque of the true mass performed by satanic cults. The naked back of a woman often serves as an altar, and a validly consecrated host is generally used to intensify the mockery. The rite commonly incorporates other elements of satanic magic such as philtres or abortifacients.”

“The black mass is a parody of [the Catholic] Mass, in which one adores and exalts Satan,” former Vatican chief exorcist Father Gabriele Amorth wrote in An Exorcist Explains the Demonic. “During the celebration, the words and external signs of the Eucharistic liturgy are used, but always in a contrary sense, in order to manifest opposition to God.”

Marc told LifeSiteNews that while “blasphemy will be part of” the ritual he will not have a consecrated Host.

His group are “atheistic Satanists” who don’t believe in “supernaturalism” but “look to science as our arbiter,” said Marc, who was raised in a Catholic home where the family attended the Tridentine Mass.

“We’re an atheist organization so as such we don’t recognize the theological value of a consecration,” he said. “We are Satanists who revere the symbolic and literary tradition of the Satanic mythology.”

Marc says he is calling the event a “black mass” because “there’s no stringent blueprint” and “we have done all sorts of black masses that look different and feel different.”

He refused to give further details about the ritual, saying: “We’re not attacking Catholics by doing this. This is a private event and a private venue.”

However, exorcists warn there is significant spiritual peril in attending a blasphemous ritual, even one that does not involve desecration of a sacred Host.

“You cannot attend such an event – even if one does so merely out of curiosity, and not with any firm desire to worship Satan – without being adversely affected,” an anonymous exorcist told Aleteia in 2014 when a black mass was planned in Oklahoma City.

“I suspect that some people will go simply to be entertained. What they may not realize immediately is that simply by going, they will open themselves to the power of the demonic,” the exorcist said.

That was echoed at the time by Monsignor Patrick Brankin, an exorcist in the diocese of Tulsa, Oklahoma.

“I would think that there would be a real strong possibility, especially if they’re in the state of sin, that they would walk out possessed,” Msgr. Brankin told Aleteia.

“They’re going into a situation where people there are calling upon Satan to exercise dominion over everything in the state – dominion over people, places, our very land…If someone went there out of curiosity, especially if there was a possibility that they were not in the state of grace, they could easily come out with a demonic attachment, whether it would be an oppression, obsession or a full possession.”

The 2014 black mass at the Civic Center Music Hall in Oklahoma City was planned by Adam Daniels, a registered sex offender who said he had obtained a consecrated Host, the Catholic League for Religious and Civil Rights reported at the time.

Oklahoma City Archbishop Paul Coakley obtained a restraining order against Daniels on the grounds the Host had been stolen, and the attorney for the Satanic group returned the Host to a Catholic priest, it reported.

“For more than one billion Catholics worldwide and more than 200,000 Catholics in Oklahoma, the Mass is the most sacred of religious rituals,” Archbishop Coakley said.

“The ‘Black Mass’ that is scheduled for the Civic Center in September is a satanic inversion and distortion of the most sacred beliefs not only of Catholics, but of all Christians,” he stated.

Archbishop Edward Slattery of Tulsa, as well as Archbishop Coakley asked Catholics to fast and pray in the lead-up to the black mass reenactment, Aleteia reported.

“It’s really got to be fought by prayer,” Msgr. Brankin said.

In 2014, a Harvard University student group planned to hold a black mass reenactment, which did not involve desecrating a consecrated Host, on campus, but it was cancelled after public outcry.

The archdiocese of Boston issued this statement: “For the good of the Catholic faithful and all people, the church provides clear teaching concerning satanic worship. This activity separates people from God and the human community, it is contrary to charity and goodness, and it places participants dangerously close to destructive works of evil.”

According to Global News, the Satanic Temple has grown rapidly in the last six years into a global movement with more than 100,000 members and 18 official chapters in the U.S., with headquarters in Salem, Massachusetts.

Marc has run the Satanic Temple’s Ottawa group since 2016, and says interest in it has burgeoned during that time.

“We have to put a moratorium on new chapters because we literally have too much growth right now,” he told attendees at The Koven, Global News reported.

Click HERE for a link to prayers for deliverance and healing from Fr. Amorth’s book.