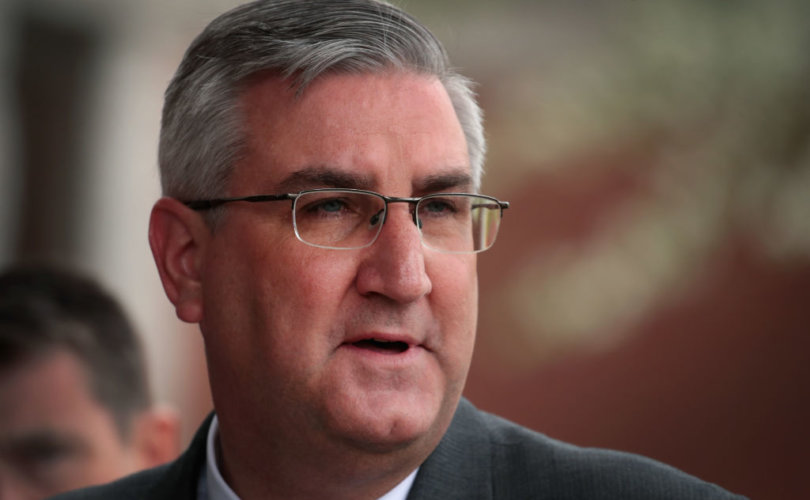 The Satanic Temple claims that it filed the suit on behalf of a female member who got pregnant without her consent. While the provisions of Indiana’s abortion ban allow for exceptions for rape or incest, the woman in question holds that the reason for her involuntary pregnancy is the legal inability for a woman to consent to sex, along with the failure of birth control, FOX59 reported.

The suit further states that two of the tenets of The Satanic Temple are violated by the law, holding that “one’s body is inviolable, subject to one’s own will alone,” and that the baby as fetal tissue is an extension of the mother’s body.

The Satanic Temple stated that members’ “beliefs should conform to one’s best scientific understanding of the world,” disagreeing with language in the law that says an unborn child is a child, holding instead that an unborn baby is fetal tissue and is nothing more than a part of a woman’s body.

The suit claims that the violation of both tenets constitutes a violation of The Satanic Temple’s religious liberty as protected by the Indiana Religious Freedom Restoration Act.

The temple also argues that the abortion ban violates the Fifth and 13th Amendments to the U.S. Constitution.

According to the Fifth Amendment, the government cannot seize private property without just compensation, and then only for public use. The suit alleges that Indiana’s abortion ban violates the property rights of women over her own uterus. It also alleges that the ban violates the 13th Amendment by placing pregnant woman in a state of “involuntary servitude” having to carry babies to term.

Indiana enacted an abortion ban in early August, prohibiting all abortions except those sought due to rape, incest, or “permanent substantial impairment” to the mother’s health. Abortions are permitted if a preborn child “suffers from an irremediable medical condition that is incompatible with sustained life outside the womb, regardless of when the child is born.”

A temporary injunction was placed on the ban Thursday by Judge Kelsey B. Hanlon, after the American Civil Liberties Union (ACLU) and a group of Indiana abortion providers filed a suit to block the ban.

In recent months, The Satanic Temple has issued numerous legal challenges to laws which limit access to abortion.

Last December, The Satanic Temple filed a lawsuit seeking to overturn Texas’ heartbeat law, claiming the law violated its religious liberty. The organization also filed a suit against Texas in March 2021 claiming that the state’s abortion regulations, such as requiring expecting mothers to see monograms of babies in utero, interfered with the group’s abortion ritual.

They also sued the State of Missouri in 2015 and again in 2019 for similar abortion regulations. In these cases, they objected to Missouri’s “informed consent” law, which mandated a 72-hour waiting period as well as the presentation of information about abortion’s medical risks and the humanity of the preborn child.