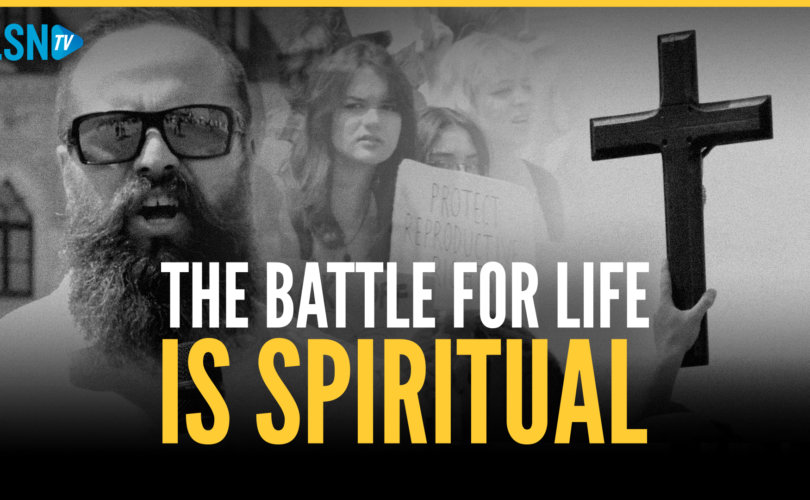 OTTAWA (LifeSiteNews) — LifeSiteNews Canadian correspondent Kennedy Hall and editor-in-chief John-Henry Westen endured a large pro-abortion counter-protester crowd at the 2022 March for Life on Thursday, with one self-described Satanist admitting that being pro-abortion is a tenet of his beliefs.

The video report opens with Hall praying the St. Michael the Archangel prayer in front of a roaring, primarily young and female pro-abortion crowd. The counter-protesters can be seen holding various anti-life signs referencing “choice” while chanting “my body my choice.”

In the next part of the video, one of the pro-abortion counter-protesters can be seen holding up a Satanic flag while wearing a rainbow colored COVID-era face mask.

“Hail Sat*n!” the man stated, when LifeSite’s Hall asked him what his flag represents.

“Well, we’ve got a Satanist here, so that just tells you about the ‘pro-choice’ side,” Hall remarked.

After showing video footage of a Traditional Mass being celebrated at St. Clement’s Church, the video returns to Hall standing around the pro-abortion crowd providing commentary on the nature of the anti-life movement.

“This ‘pro-choice’ movement has become a parody of itself. We’ve got Satanists, we’ve got topless people with beards, we’ve got people saying ‘Abortion Saves Lives,’ you know I’m starting to think a lot of those Scriptures are coming to fruition,” he added.

Continuing, Hall is able to have a conversation with three young ladies who are at the counter-protest in support of a woman’s “right” to “choose” to have an abortion.

When Hall asked if they have considered letting the baby itself have a choice, one of the teenage girls shouts “No” and says that “by definition it [the unborn baby] is a parasite,” and therefore it is not “alive.”

The conversation becomes heated as Hall continues to challenge their beliefs, with the same young lady accusing Hall, and the pro-life movement more broadly, of not caring “what happens to the mother after” she chooses life for her child.

While pro-abortion activists often claim that those who are pro-life are anti-women and not pro-life but merely “pro-birth,” many pro-life organizations and crisis pregnancy centers were founded for the precise purpose of providing support to women who choose life before, during, and after the birth of their child.

Moreover, while pro-lifers acknowledge that the unborn child is the primary victim of abortion, it is also commonly held that women too are negatively impacted by the ghastly procedures.

One study from the prestigious British Journal of Psychiatry (BJP) found that women who have undergone abortion have an 81% increase in the risk of mental health problems, and an even greater risk for substance misuse and suicidal behavior (230% and 155%, respectively). These finding have consistently led pro-lifers to decry abortion from the perspective of both the mother undergoing the procedure and in defense of the life of the unborn child.

Later in the video, a woman who says she is a mother and who is dressed in the Handmaid’s Tale red garb tells John-Henry Westen that her support for abortion comes from a “spiritual point of view,” as she believes pregnant women have an inherent right to “choose” whether they “become a mother.”

Concluding the video, Hall once again can be seen talking to the man holding the Satanic flag. After confirming he is pro-abortion, Hall asks if he holds that view “because he is a Satanist,” to which the man replies “Yes.”

“Can you say that again? So you’re a Satanist and that means you’re ‘pro-choice?'” Hall clarifies.