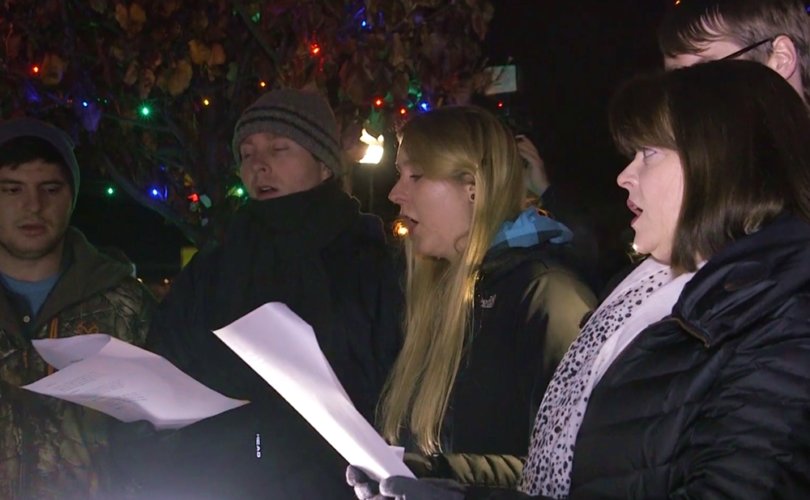 FERNDALE, Michigan, December 23, 2017 (LifeSiteNews) – Satanists along with anti-Christian radicals disrupted a group of Christians singing Christmas carols in front of a nativity display at a city hall in Michigan.

One of the most obscene disrupters was a 19-year-old man who has run for a seat on a Board of Education and has worked on the campaign for a democrat politician.

The organization Church Militant (CM) had received a permit from the City of Ferndale, Michigan, to set up their own Nativity display at City Hall on Wednesday evening and sing carols while offering free hot chocolate and apple cider. The event was called “Noel Night.”

Christine Niles of Church Militant told LifeSiteNews that the organization intended the evening to be one of Christmas cheer.

“We were granted permission to host Noel Night on December 20 from 6 to 7 PM,” she said. “We intended it to be a night of spreading Christmas cheer, inviting locals to join us in Christmas caroling and giving public witness to Our Lord and His birth.”

Two dozen protesters, described by Church Militant as “satanists, atheists and leftist radicals,” turned up with signs sporting pentagrams and pictures of the demon Baphomet.

One sign asked people to worship Satan in exchange for a free donut.

The loudest and most prominent of the protesters was identified by Church Militant as Alex Drysdale of Trenton, MI.

Drysdale was caught on video singing obscene versions of Christmas carols and making crude noises through a bullhorn at the singers.

Drysdale ran unsuccessfully for a place on the Trenton School Board in 2016. He also served as an intern for Steven Rzeppa’s State House campaign from October, 2015 to August, 2016.

A video of the Wednesday event shows Drysdale singing “You’ll get pie in the sky when you die/that’s a lie” and obscene versions of Christmas songs. At times he resorts to crude noises through a bullhorn.

The 19-year-old was implicated in 2016 in an anti-Trump march that he had organized that was to take place at the same time and in the same place as a holiday tree-lighting ceremony in November. The event was to protest so-called “racism, sexism, homophobia” in the Trump administration. At the time, Drysdale told the News Herald that he hadn’t known of the conflict. He said he cancelled his march after both he and his stepmother received threats.

Drysdale did not respond to LifeSiteNews’ request for comment.​

Niles told LifeSiteNews that the studio was “somewhat surprised” to discover on the morning of the event that two groups — local Antifa sympathizers and LGBT activists — had planned to protest, falsely labelling CM as a “hate group” and “alt right.” When CM contacted the police, they discovered the the police already knew and had planned a “fairly heavy presence to ensure the peace.”

“As we gathered, things were tense,” said Niles. “We weren't sure what to expect. Protesters were milling about on the sidewalk in front of City Hall, while our group was right next to the building where we had set up a table for hot cocoa and apple cider.”

She found one type of protester particularly shocking.

“What surprised me were the number of satanists who showed up, wearing pentagrams and signs with the demon Baphomet, handing out satanic Christmas cards,” she said.  “There is a Satanic Temple in Detroit, and we've had run-ins with them before, reporting on their unveiling of the Baphomet statue in downtown Detroit in 2015, so we were already on their radar.”

Niles said the protesters were quiet until the carolers began to sing.

“All throughout our traditional Christmas carols, the protesters tried to drown out our caroling shouting blasphemies and anti-Catholic slurs, [like] ‘Nazi punks,’ ‘Hail Contraception,’ ‘Hail Satan,’ and obscenities,” Niles told LifeSiteNews.

“Atheists also mocked us for our belief in Christ and mocked Christ Himself. They didn't seem to care that there were little children present as they cursed. A ‘transgender’ couple stood in full view of our group, including of the children, and started kissing.”

The protesters also employed whistles and kazoos. “One fellow brought a bullhorn and substituted obscene lyrics while we sang carols like “Noel, Noel” and “Joy to the World,” said Niles.