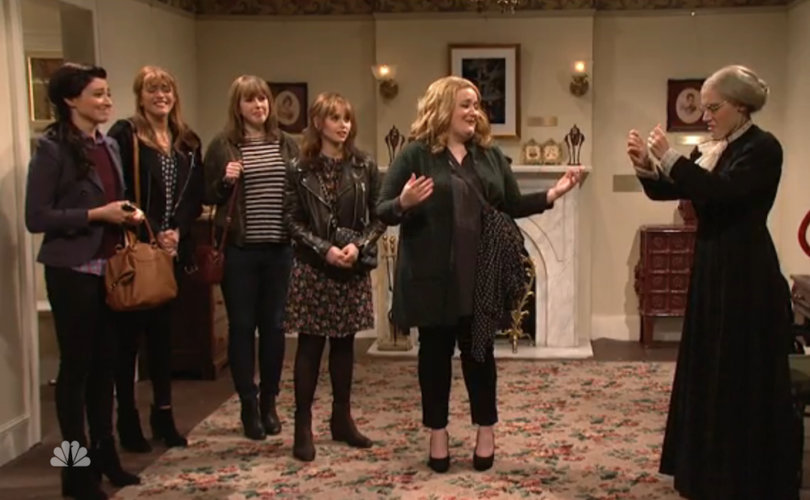 Many don’t know that as a rule the first feminists were pro-life, and according to data from Feminists for Life, most held that abortion is a form of oppression and violence against women and their children.

Many, notably Susan B. Anthony, the namesake to a leading U.S. pro-life education and advocacy organization, worked to address what drove women to abortion decades before it became legal and easily accessible.

Anthony, who never married and was said to be both aggressive and compassionate, told a gentleman who complimented her by saying she ought to have been a wife and a mother:

“I thank you, sir … but sweeter even than to have had the joy of caring for children of my own has it been to me to help bring about a better state of things for mothers generally, so that their unborn little ones could not be willed away from them.”

In the SNL skit, a group of millennial women just completed a tour of the Rochester, N.Y., home of suffragist and abolitionist Anthony, and they are gushing over the experience as they prepare to leave.

“Gosh, I can’t believe we just toured Susan B. Anthony’s real house,” says one, “I mean this was so cool.”

“I know,” chimes in another. “She did so much for women’s rights, I wish we could thank her.”

So at the suggestion of a third, they partake of a “secret” legend pronouncing that a group of women could conjure the feminist pioneer by holding hands and chanting her name three times, jumping and giggling while they do so.

After Anthony appears in a puff of smoke and announces herself, the women are amazed, stating in disbelief, “Oh, my God, it worked!” and “Susan, I can’t believe it’s you!”

Then, interestingly, in a veiled reference to the so-called war on women, one of the women sets up the reminder of the sketch, telling Anthony, “We just want to thank you, it’s kind of a hard time for women right now, but you give us hope.”

Anthony tells them it’s always a hard time for women. She paved the way for them and now, “You must pave the way for women 100 years from now. You are the future, my dears.”

One responds, “Wow, that is so true. Thank you, Susan,” and runs to fling her arms around Anthony in a hug of gratitude and admiration.

“Thank you for everything,” exclaims another, also running for the hug.

As poignant background music plays, they each join in to create one huge hug around the feminist icon, emoting audible affection and appreciation.

The women leave Anthony and move back to their side of the room with her still there, launching into a discussion on the cab ride home, one cab or two for the group, should they pay for two or try to squeeze into one.

One eventually volunteers to pay for the cab if the rest agree to reimburse her via the Venmo mobile payment app. They all join in to shame the one among them who fesses up she doesn’t have the app.

As they continue in this self-interested manner, Anthony begins imparting her feminist wisdom, telling them such things as “A woman can only be in chains if she allows herself to be in chains,” and “An idea’s the most dangerous weapon a woman can have.”

“Yeaaaaahhh … For sure,” they respond, when listening, and, “What was that, Susan?” when not paying attention to her.

As one woman makes the call for the cab, Anthony approaches her repeatedly, with almost childlike curiosity, invading in the woman’s space, interrupting again and again to ask about the phone.

The millennial woman gets annoyed and stops short of snapping at Anthony, but then retreats a bit.

“Thank you so much for giving us the right to vote,” she placates Anthony, but continues, patronizing her.

“Thank you, I’m sorry, but we just need to do this quickly, OK?” The woman dismisses Anthony, then tells the cab operator, “I’m sorry, but Susan B. Anthony is being such a pain in — .”

The women’s concern then turns to whether they’ll be able to get food on the way back to New York and the low quality of food on the train.

Anthony wants to show them her desk where she wrote in her diary about the women’s movement.

“I can’t believe you sat right there,” adds another, prompting them all to offer a forced, “Wowww.”

There’s more back and forth with Anthony trying to share aspects of life in her time and the women feigning interest, and ultimately another snaps at Anthony for being bothersome to them.

The outburst causes them to pause and the one apologize to Anthony.

“That’s all right,” she says. “I fought so that women like you could speak your minds. I am proud of you.”

After they tell her they have to go and that it was such an honor to meet her, she follows after their chorus of “Byyyee” with more feminist wisdom.

“Just remember, a woman’s just as good as a man,” she calls after them.

“Oh, yes,” the women tell her, nodding, trying to get out the door. “Thank you.”

Then it’s Anthony’s final maxim that stops them in their tracks.

“Also, abortion is murder!” she exclaims.

Snapped from self-absorption, the women halt and turn back in shock, one of them emitting a horrified, “WHAT?!!” and the sketch ends, having spoken volumes.