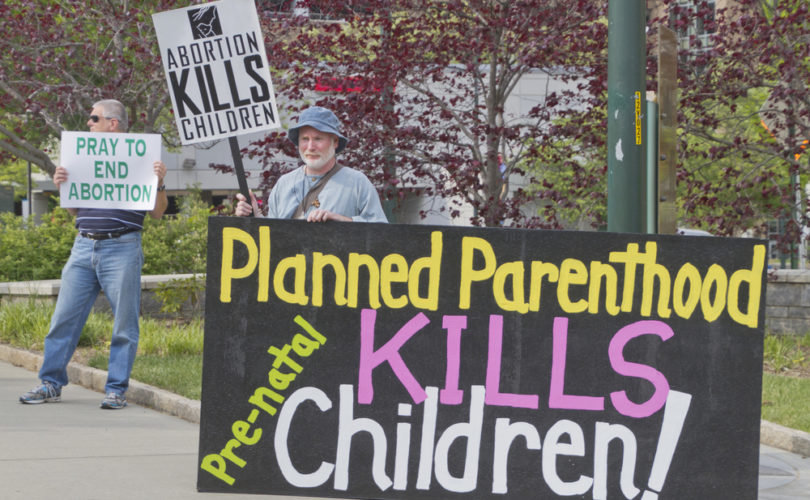 April 27, 2018 (LifeSiteNews) — America’s largest abortion provider is fighting as hard as ever to expand its lethal product in the U.S. while the nation’s taxpayers continue to underwrite Planned Parenthood’s business with half-a-billion dollars.

Three years after undercover videos exposed aborted baby body parts trafficking and as defunding efforts remain stalled in Congress, organizers of the third annual National Day of Prayer and Protest Against Planned Parenthood are calling for pro-life supporters to attend one of the more than 140 rallies nationwide on Saturday to stand against Planned Parenthood’s aggressive new agenda.

“Planned Parenthood is on the warpath,” Eric Scheidler said in a statement on the #ProtestPP event.

“We still have a great deal of work to do educating our fellow Americans about Planned Parenthood,” the executive director of the Pro-Life Action League and one of three national #ProtestPP co-directors told LifeSiteNews.

“Most people are shocked when the learn, for example, that Planned Parenthood has cornered 35 percent of the abortion market — compared to only 1 percent of pap tests and only 2 percent of breast exams,” Scheidler continued. “These rallies, taking place all over the nation, give us an ideal opportunity to share the truth about Planned Parenthood — and the more people turn out, the more impact the rallies will have. Nobody should sit this one out if they care about ending abortion.”

As of press time Friday, 146 #ProtestPP demonstrations had been scheduled in 37 states. The event is a collaborative effort of three national groups — Pro-Life Action League, Citizens for a Pro-Life Society and Created Equal — and dozens of others.

The focus of the third #ProtestPP is the abortion business’s recent announcement of a “Sweeping Initiative to Expand Reproductive Health & Rights State by State.”

In February, Planned Parenthood executive vice president Dawn Laguens stated that the abortion provider is “going on the offense,” pushing abortion expansion plans in “all 50 states.”

This month, #ProtestPP organizers also noted, Planned Parenthood announced its participation in the “Win Justice” project, a $30 million campaign to advance its agenda in this year’s elections in November. The “progressive” pro-abortion coalition is targeting female, young and minority voters in midterm races in Florida, Michigan, and Nevada.

“Planned Parenthood claims American women rely on them for healthcare,” said Monica Migliorino Miller, “but in reality, four out of five women will never set foot in one of their centers.”

As pro-life advocates remain frustrated at the lack of action in Congress to stop the taxpayer funding of the nation’s largest abortion provider, the April 28 #ProtestPP events will also reissue the call for federal authorities to stop Planned Parenthood’s taxpayer funding. #ProtestPP organizers point to an effort underway to revise Title X family planning rules to block the abortion giant as a recipient and deprive the abortion chain of millions of dollars annually.

Each of the annual #ProtestPP events has been different in focus for the pro-life movement, Scheidler told LifeSiteNews, from when the memory of the “baby parts” videos was still fresh in people's minds, to the President Trump's electoral victory encouraging hope for defunding efforts, and now with defunding stalled in Congress.

“We're calling on President Trump to end Planned Parenthood's Title X family planning funding,” said Scheidler, “which he can do immediately by instructing HHS Secretary Azar to rewrite the Title X rules to exclude abortion providers. That would take away $60 million-80 million from Planned Parenthood.”

The #ProtestPP co-directors also emphasize that each dollar taken from Planned Parenthood would be redirected to healthcare providers not involved in abortion.

“The effort to defund Planned Parenthood has nothing to do with taking healthcare away from poor women and families,” Created Equal executive director Mark Harrington said. “It’s about taking tax dollars away from the nation’s largest abortion chain.”

“We are approaching the third anniversary of the release the Center for Medical Progress videos showing Planned Parenthood selling aborted baby parts,” Harrington told LifeSiteNews. “We will not let up on the pressure being applied to the abortion giant, especially now that Planned Parenthood is being investigated by the Department of Justice.”

The Pro-Life Action League also recently discovered through the Freedom of Information Act that Planned Parenthood was trying to prevent the pro-life group from protesting its fundraiser in Chicago next month, Scheidler said.

“We've got text messages about how we can be blocked from exercising our First Amendment rights,” he continued. “This goes to show how much Planned Parenthood hates it when pro-lifers come out on the street and confront the public with the truth about their real agenda. That ought to inspire pro-lifers to get active protesting Planned Parenthood at every opportunity.”

The abortion behemoth’s nefarious history and plans for the future make it imperative for pro-lifers to be part of Saturday’s demonstration, Migliorino Miller said, and there are options to attend across the country.

“Planned Parenthood has launched a campaign to broaden access to abortion,” she said, adding, “Planned Parenthood still receives close to half-a-billion dollars in taxpayer funding. Over 300,000 abortions every year are done at one of their death centers.”

“So the protests against Planned Parenthood are not an option,” Migliorino Miller told LifeSiteNews. “Everyone needs to get out on the street tomorrow and stand up for the helpless unborn. There are protests all over the United States in this nationwide effort to stop Planned Parenthood.”

Harrington added, “Our prayerful presence on the sidewalks in front of Planned Parenthood facilities during this annual protest spotlights our continued commitment to never give up in our effort end the tax-funded mass murder of preborn humans by Planned Parenthood and abolishing abortion altogether.”