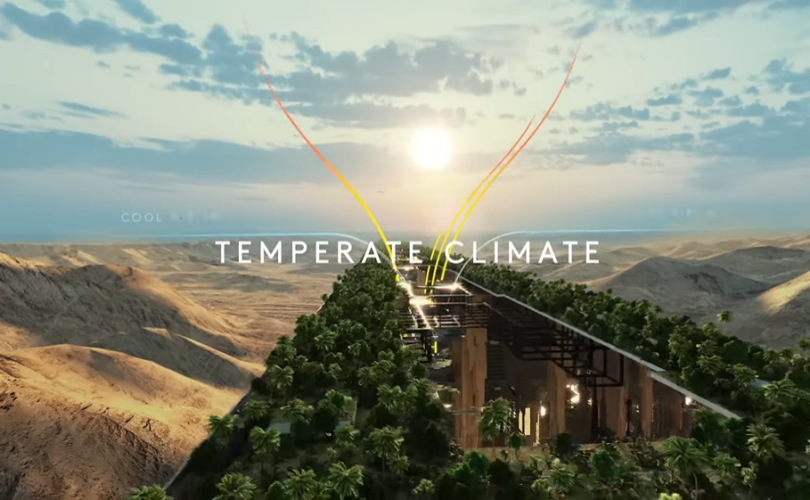 (LifeSiteNews) — Saudi Arabia unveiled visuals of its plans to build a 170 kilometer-long linear, one-building “green” city called The Line and designed to sustainably meet the living needs of 9 million people.

“For too long, humanity has existed within dysfunctional and polluted cities that ignore nature. Now, a revolution in civilization is taking place,” explains the promo video for the city, shared online Wednesday by Dezeen.

The ambitious planned megastructure, which looks like a line stretching across the desert from an aerial view, is billed as a way to “consolidate” the carbon footprint of a traditional city. By running entirely on renewable energy, and confining city transportation to a high-speed rail, the city would boast zero carbon emissions once operative.

Residential, commercial and leisure areas as well as schools would all be included in the futuristic city, consisting of two-skyscraper, 500-meter-high wall-like structures with mirror facades that will enclose an open area between them so that sunlight can stream in.

Residents would be able to travel from end to end of the 105.6 mile-long city in 20 minutes, and would “have access to all their daily needs within five-minute walk neighborhoods.”

The city will be located in the northwest of the Gulf country, and according to renderings, will “run into the Red Sea,” where an extension of its structure will serve as a port for ships.

Commentators have slammed the project as “dystopian,” and one described it as a “blatant greenwashing PR exercise by the heads of this rotten regime,” adding that “it’s an attempted distracting cop-out” since “Saudi Arabia is still at the very bottom for human rights (just pick next to women, any minority).”

The Saudi Arabian legal system is largely based on Muslim sharia law and criminializes anyone who “challenges, either directly or indirectly, the religion or justice of the King or Crown Prince. According to Amnesty International, two of 81 men executed by the Saudi Arabian government in March were “convicted of crimes related to their participation in violent anti-government protests.”

Tech blog Engadget has raised concerns that The Line “is expected to be loaded with countless sensors, cameras, and facial recognition technology, that in such a confined space could push government surveillance to almost unthinkable levels.”

Another commentator wondered about the fact that renderings for The Line show women wearing tight leggings, which would be considered an outrageous offense against modesty according to current Saudi law that requires women to be covered from head to toe in public.

“This being Saudi Arabia, it’s interesting and surprising to learn from the renderings that this megalomaniacal hellscape will apparently also be filled with women sporting luxuriant, uncovered hair and yoga pants … with not an all-shrouding, floor-length black abaya in sight.”

“I guess these represent just some of the millions of liberated foreigners who will be enthusiastically flocking to live there,” commented “KT.”

In 2019, Saudi Arabia abolished the Abaya and headscarf requirement for foreign women in an effort to encourage tourism.

Others have expressed skepticism that the city will be completed. CNN noted there are recent failed “super-projects” that serve as “cautionary tales,” such as the $38 billion planned Nakheel Harbour and Tower development in next-door Dubai, which was axed six years after its proposal.

“If this gets built, I will eat everybody’s hat,” commented “JC” on Dezeen’s report.