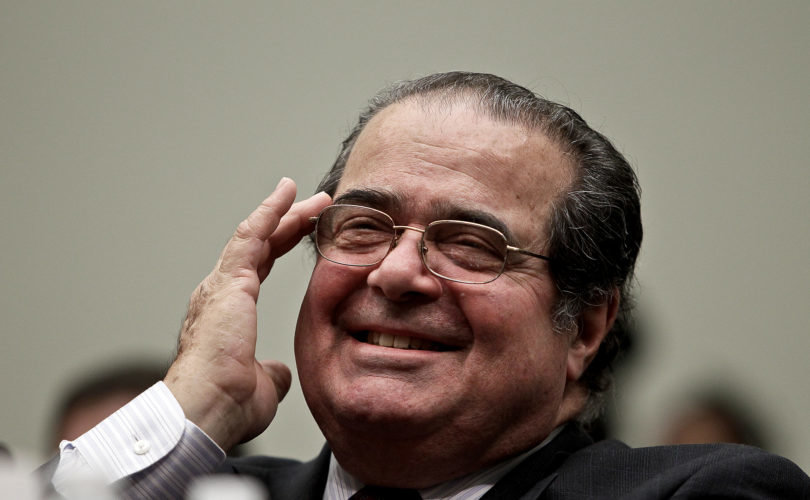 Justice Scalia spoke Tuesday for Constitution Day at Rhodes College, where his grandson is a student, warning that the Supreme Court has become a “threat to democracy.”

The 79-year-old Reagan appointee said he worries about the nation's highest court, because it is “headed in the wrong direction.”

“Saying that the Constitution requires [homosexual] practice, which is contrary to the religious beliefs of many of our citizens,” Scalia said – “I don't know how you can get more extreme than that.”

Scalia described the Obergefell v. Hodges decision as the “furthest imaginable extension of the Supreme Court doing whatever it wants.” He rhetorically asked, “Do you really want your judges to rewrite the Constitution?”

The conservative justice is well-known for his insistence that the judicial branch of government has the task of interpreting the law in light of the Constitution, not creating law from current cultural trends.

On June 26, the Supreme Court judge wrote his own dissent to the Obergefell decision. In what Church Militant calls “his most sharply worded dissent yet,” Scalia called the decision an abuse of the judicial branch, which he said was usurping the authority of the legislative branch, and thus the will of the people.

Scalia's dissent described the Supreme Court's overreach in Obergefell as stepping outside the scope of its authority to dictate radical social policy – which properly is the domain of the democratic process. He wrote that the ruling was a “naked judicial claim to legislative – indeed, super-legislative – power; a claim fundamentally at odds with our system of government.”

All four dissenting judges – Roberts, Scalia, Thomas, and Alito – felt so strongly that each wrote his own dissent. “Today's decree says that my Ruler, and the Ruler of 320 million Americans coast-to-coast, is a majority of the nine lawyers on the Supreme Court,” Scalia wrote. He added that the decision lacks “even a thin veneer of law.”

In prophetic words that have already statistically come true, Scalia concluded that the Obergefell decision will “diminish this Court's reputation for clear thinking and sober analysis.”

Scalia also entertained a Q&A session with students, who asked about U.S. drone strikes against Americans in the Middle East. Scalia opined, “If that person has taken up arms against the United States, what's the difference between allowing our soldiers to shoot him dead and allowing a drone to kill him?”