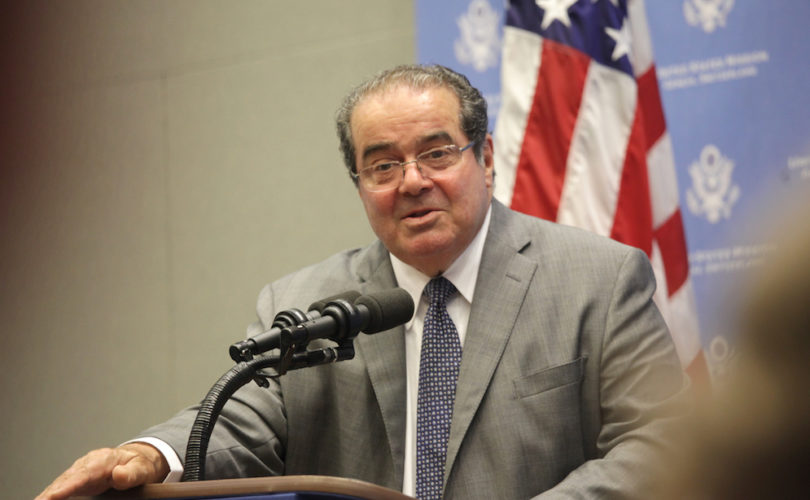 WASHINGTON, D.C., February 16, 2016 (LifeSiteNews) – Those on both sides of the political aisle continue to mourn the late Supreme Court Justice Antonin Scalia, who died in Texas on Saturday at the age of 79. The longest-serving justice at the time of his death, Scalia was an eloquent, uncompromising, and sometimes wise-cracking jurist whose opinions cleaved to a strict construction of the Constitution's original intent.

Everyone familiar with the justice said he had the ability to describe and defend his views with precision, rigor, and a dazzling and sometimes biting sense of humor.

Justice Scalia brought that vision to bear with particular scrutiny upon abortion and laws giving homosexuals sweeping and unprecedented legal “rights” with words that merit reading, and re-reading, after his passing.

In his very first case on abortion, Webster v. Reproductive Health Services (1989), he hoped the court would address Roe v. Wade – something it deferred for another three years. Kicking the can down the road, he wrote, guaranteed “at least another term with carts full of mail from the public, and streets full of demonstrators, urging us – their unelected and life-tenured judges who have been awarded these extraordinary, undemocratic characteristics precisely in order that we might follow the law despite the popular will – to follow the popular will.”

The following year's Hodgson v. Minnesota (1990) case ruled that parental notification laws are constitutional – but the plurality decision failed to agree on which kind of laws, how many parents must be notified, or whether states must allow a “judicial bypass” before they became unconstitutional. Scalia's answer was simple: Nothing in the Constitution addressed the issue at all. The justices were simply making it up as they went alone.

“One will search in vain the document we are supposed to be construing for text that provides the basis for the argument over these distinctions; and will find in our society's tradition regarding abortion no hint that the distinctions are constitutionally relevant, much less any indication how a constitutional argument about them ought to be resolved,” he wrote. “I continue to dissent from this enterprise of devising an Abortion Code, and from the illusion that we have authority to do so.”

His fellow justices – with a slightly different court composition – addressed Roe in Planned Parenthood v. Casey (1992). The justices upheld the case, arguing that women had come to rely on abortion to plan their life choices, but states were free to regulate abortion so long as their laws did not place an “undue burden” upon women seeking an abortion.

Scalia dismissed this as the “jurisprudence of confusion.”

Abortion, he said, should be decided, “like most important questions in our democracy: by citizens trying to persuade one another and then voting.”

“The issue is whether [abortion] is a liberty protected by the Constitution of the United States. I am sure that it is not…because of two simple facts,” he wrote, “(1) the Constitution says nothing about it, and (2) the longstanding traditions of American society have permitted it to be legally proscribed.“

He also slammed notions that the court had “settled” the issue with its ruling.

“Roe created a vast new class of abortion consumers and abortion proponents by eliminating the moral opprobrium that had attached to the act,” he wrote. “Many favor all of those developments, and it is not for me to say that they are wrong. But to portray Roe as the statesmanlike 'settlement' of a divisive issue, a jurisprudential Peace of Westphalia that is worth preserving, is nothing less than Orwellian. Roe fanned into life an issue that has inflamed our national politics in general, and has obscured with its smoke the selection of Justices to this Court in particular, ever since. And by keeping us in the abortion umpiring business, it is the perpetuation of that disruption, rather than of any pax Roeana, that the Court's new majority decrees.”

He would be horrified by Stenberg v. Carhart, a 2000 ruling that struck down a partial birth abortion ban. (The Court would later uphold a different ban.) “I am optimistic enough to believe that, one day, Stenberg v. Carhart will be assigned its rightful place in the history of this Court's jurisprudence beside…Dred Scott,” he wrote. “The method of killing a human child – one cannot even accurately say an entirely unborn human child – proscribed by this statute is so horrible that the most clinical description of it evokes a shudder of revulsion.”

The notion that the U.S. Constitution somehow “prohibits the States from simply banning this visibly brutal means of eliminating our half-born posterity is quite simply absurd.”

Justice Scalia similiarly opposed judicial activism that granted heretofore undiscovered rights to homosexuals, saying that states had the right not to comply (unless they democratically chose to do so) and that individuals were “entitled” to oppose homosexual actions.

In Romer v. Evans (1996), which struck down Colorado's Amendment 2, Scalia wrote in his dissent that states were not bound to extend to homosexuals the same anti-discrimination status as that accorded on account of race or sex. “This Court has no business imposing upon all Americans the resolution favored by the elite class from which the members of this institution are selected, pronouncing that 'animosity' toward homosexuality is evil. I vigorously dissent,” he wrote. “Coloradans are, as I say, entitled to be hostile toward homosexual conduct.” (Emphasis in original.)

Seven years later, he dissented again when the court reversed its own recent precedent and overturned an anti-sodomy law, citing international law in the process. The decision in Lawrence v. Texas in 2003, he wrote, paved the way for the redefinition of marriage – something his opponents vigorously denied at the time.

“The Court says that the present case 'does not involve whether the government must give formal recognition to any relationship that homosexual persons seek to enter,'” he wrote, quoting Justice Anthony Kennedy's majority decision. “Do not believe it.”

“Today’s opinion dismantles the structure of constitutional law that has permitted a distinction to be made between heterosexual and homosexual unions, insofar as formal recognition in marriage is concerned,” he continued. “What justification could there possibly be for denying the benefits of marriage to homosexual couples exercising '[t]he liberty protected by the Constitution?'”

“This case 'does not involve' the issue of homosexual marriage only if one entertains the belief that principle and logic have nothing to do with the decisions of this Court,” he wrote, taking a poke at his fellow justices. “Many will hope that, as the Court comfortingly assures us, this is so.”

Ultimately, the Lawrence decision – and Scalia's prescient dissent – was invoked in the jurisprudence that ultimately overturned dozens of marriage protection amendments across the nation, preserving the immemorial definition of marriage as the union of one man and one woman.

By last summer's Obergefell v. Hodges, he believed the justices had fully devolved from parsing the Founding Fathers' views to basing law on sentimentality and raw power. “The Supreme Court of the United States has descended from the disciplined legal reasoning of John Marshall and Joseph Story to the mystical aphorisms of the fortune cookie,” he wrote.

President Obama has said he will nominate a successor to fill Justice Scalia's vacant seat, a move Senate Republicans have pledged to block. No one contests that the new appointee will not share Justice Scalia's originalist views – nor, it seems likely, his larger-than-life personality.

Scalia and the meaning of justice